Home ▸ Other ▸ WWE Once In A Lifetime: Rock vs. Cena Review

WWE Once In A Lifetime: Rock vs. Cena Review

Why am I reviewing this infomercial? I don’t know. Why is Goliath (voice actor Keith David) from Disney’s animated show Gargoyles narrating it? You’ve got me. How did I travel into the future to watch this? I didn’t. It got leaked. I’m seriously considering buying this one…

Spoilers ahead, sort of.

– Goliath tells us sets up our introduction… men still in their prime, on top of their game, etc… then hits the catch-phrase, “Once in a Lifetime.” Cut to interview segments of the struggle to the top. All that time in the indies! Sheesh. Immediately we jump into Rock’s last ten years as an actor. “A Vaudevillian Showman,” as Jericho puts it. Songs, movies, mummies, etc. Media clip after media clip. Precisely what you would expect. Cena gets the same treatment. Childhood through media-whore stuff. Who does one root for based on the opener? No one. They’re twins, sort of like Devito and Schwarzenegger. Jimmy Fallon can’t make up his mind either, I suppose. NASCAR guy, Make-A-Wish, and so forth. 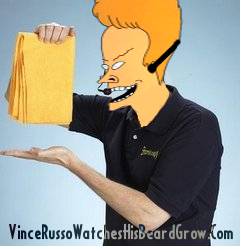 – We return after non-existent commercial breaks that will exist only in the future. It seems that we are going to repeat what we just saw, but with more detail. Onto John Cena’s childhood. Ebeneezer Scrooge watches outside in the snow, debating whether as a miser he will drop money on this PPV… Cena’s parents swoon over the days when little Cena bullied all the local neighbourhood children during backyard wrestling matches. We’re shown some home videos of a little Cena cutting promo’s. That was kind of entertaining, all sarcasm aside.

Naturally, The Rock gets a similar Forrest Gump treatment as we watch him grow up in clips and celebrity/family commentary. The scene where he runs away from the bullies and his leg braces snap off his legs is fantastic. I’m totally buying this PPV now. Rock used to breakdance, and somewhere Scotty Too Hotty hangs his head in shame. Dwayne notes when he was in grade 9, he moved to Hawaii and that was a pivotal moment because he and his mom got evicted. Hence his motivation to lift weights… football will save the day. Well, we all know the legend of the best Calgary Stampeder of the CFL! Moving on… 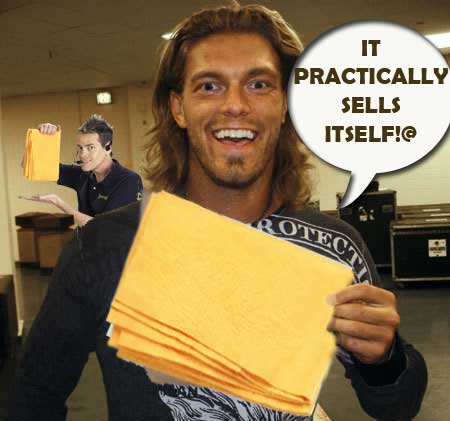 At least one endorsement from the HOF too? Hmm… only $55?

– The next segment focuses on the last year and change build. They spend a bunch of time on the Twitter hype. Yawn. WWE staff emote over the use of social media for a while. Fruity Pebbles and all that fun stuff.

Official WWE sponsors must get time, of course.

– Dwayne visit’s his dead ancestors. Not going to dis this part. I kind of enjoyed the introspective.

– Dwayne visits Samoa in 2004. This clip is not related to the match in any real way. I guess they had to fill an hour, and a little happy story media fits the bill. Anthropologists around the world pantomime a People’s Elbow. Then he sings and stuff. Great.

– Cena “is real” we’re told. A work horse. Wrestlers and friends/family/random stars are convinced. We go to Cena’s training facility, and FCW guys get some time. Boos/Cheers, hard working, etc.

– Rock’s Hollywood career starting with the Scorpian King is covered, again. Yawn.They neglect to mention a bunch of the films that would make Rock’s comedy side present him as weak. Very one sided, he’s an action hero and serious actor…

– Cena is happy doing what he loves everyday, etc. Cena comments on being the franchise, and the boos and cheers again. Jericho notes that regardless Cena being polarized, but getting a reaction, Shawn Micheals says he finds it funny that people wearing John Cena shirts are booing him. Cena is seen autographing a kid in a “Cena Sucks” shirt. Cena says his job is to entertain, regardless of whether you boo or cheer for him.

There can only be one.

– Like an essay, our conclusion repeats the same sentiments. These guys will fight at WrestleMania. Sound byte extraordinaire! Music videos and all that lovely nonsense. “They need success, like they need air” is repeated numerous times..

– This is little more than a hype package aimed at the 4 people who don’t know who these people are, and this feud. Ok, maybe there are more people than that, but seriously, save your time. The odds are if you are reading this, you are already well aware of everything that happens in this show.