It’s that time of the week again for the radio to tell you everything it knows.  Joe, Jorge, G, and JT are joined by a pair of Brians this week – frequent guest Brian Muller, and occasional guest Mr. Brian DeVille.  Mr. DeVille dropped in to promote ESW BrawlFest in Lockport, NY next Friday, featuring special guests The Hurricane, Goldust, and Michael Elgin.  Wrestling television was discussed, ideas were thrown around about who Kaitilyn’s secret admirer could be, and we even spoil an upcoming episode of NXT for you!

In the news, we get conflicting reports of when CM Punk may return.  Jim Ross tweets his opinion on a women’s wrestling organization’s chances of making it on a national level.  Yahoo decides they want to get into the wrestling game, with thoughts on The Rock, and a new deal with WWE.  We reveal who the first inductee into the 2014 class of the WWE Hall of Fame will most likely be.  We hear from G how the Rogers purchase of The Score in Canada may affect the WWE.  We have a good laugh at statements from Alberto Del Rio and Bully Ray, are dumbfounded by the happenings at a recent TNA house show, and much, much more!  Tune in!

This week’s break song was “Anthem” by Rush, as covered by Anthrax.  Buy it here! 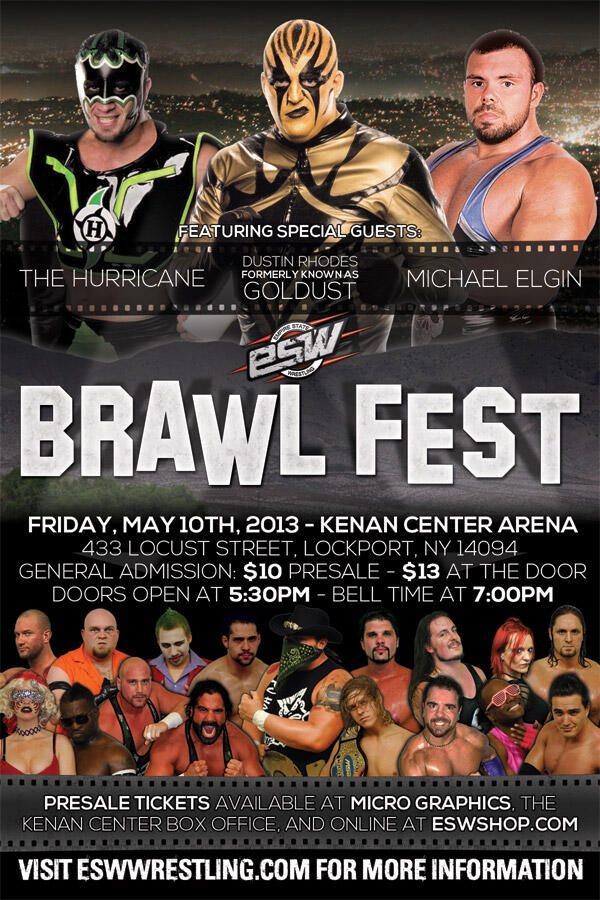 ESW Brawlfest, May 10th at the Kenan Center Arena in Lockport, NY