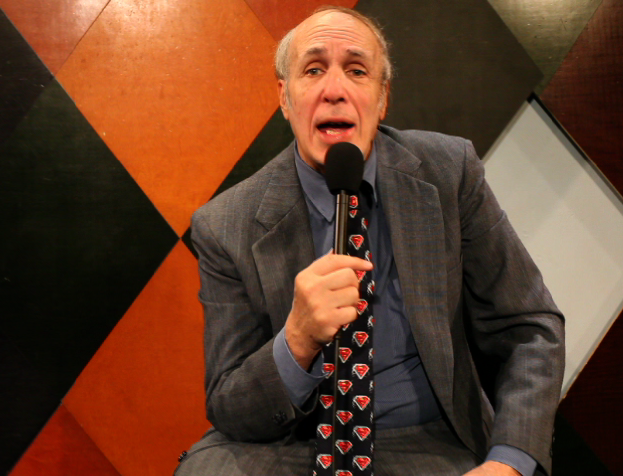 “I kept tonight open to be on your show, did not go to TNA,”  says legendary wrestling journalist Bill Apter.  “You can quote me on that on Twitter.”  An interview two months in the making, Apter sits down with our own ThinkSoJoe, and jumps right in, referencing his trademark combover and how it makes him easier to spot as he’s photographing older matches.

In the 38 minute interview, Bill talks about how to be a professional pro wrestling journalist, the Championship Office Wrestling Championship, and his recent trip to England.  He asks about the name “Bored Wrestling Fan,” and talks about whether or not he gets bored with the product after 50 years, praising Kevin Owens and Neville’s match from RAW this past Monday specifically.  We discuss whether three hours is too long, and he tells a story about a body shop where the workers spent 15 minutes discussing RAW.

We get into a story from Bill’s new book, “Is Wrestling Fixed? I Didn’t Know It Was Broken,” where Bill tries the hotel business, an endeavor in which he compares himself to comedian Jerry Lewis.  The hotel talk continues on to a chapter in Bill’s book about the late Tony Parisi, who owned hotels and restaurants in Niagara Falls.

We talk about the dangers of being a ringside photographer – particularly when Abdullah The Butcher is involved.  It’s also revealed that the book title was inspired by a conversation Bill had with a young fan about Abdullah.

Bill teaches Joe how to correctly pronounced Andy Kaufman’s name, then talks about Mike Tyson borrowing subway fare from him.  This leads to a discussion about the New Day, who referenced Tyson this past Monday on RAW.  “The New Day is terrific” says Bill.  He says they’re having fun.  “Don’t you want to have fun at your job?”

The discussion turns to 1Wrestling.com, Bill’s home on the web.  He talks about the innovations that the site came up with, and how it may be the oldest active pro wrestling site.

We talk about NJPW, and the rumors of Shinsuke Nakamura and members of the Bullet Club leaving and signing with WWE.  At the time of the interview, we hadn’t seen any confirmation (WWE tweeted about the rumors while we were recording).

Lastly, Joe asks when they were going to do karaoke – to which Bill responds by breaking out a flash drive.  Bill raps “Moon River,” before offering up The Temptations “My Girl” for a duet.  “Now I see why you don’t karaoke,” says Apter.  He plugs upcoming appearances before closing us out with a rendition of Harry Connick, Jr’s “For Once In My Life.”

Find Bill Apter on Twitter at @apter1wrestling, and pick up his book “Is Wrestling Fixed?  I Didn’t Know It Was Broken!” on our Amazon store.