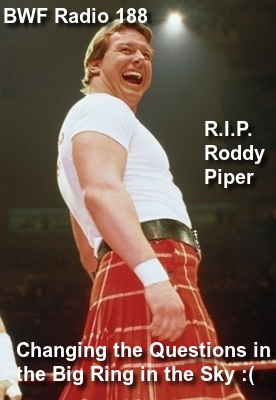 This week on BoredWrestlingFan Radio, we pay tribute to the late, great “Rowdy” Roddy Piper.  We talk about what Hot Rod meant to us and his influence on the world of professional wrestling.  We’re then joined by ten time WCW Tag Team Champion Stevie Ray.  We get Stevie’s thoughts on Roddy Piper and Dusty Rhodes, and turn the conversation to the Hulk Hogan controversy, and racism in the United States in general.  We talk about his induction speech for his brother Booker T at the 2013 Hall of Fame.  We find out more about his WWE Legends deal and his upcoming projects.  It’s truly a must-hear interview.  Thanks to Cheap-Heat for setting this interview up for us.

In the news, Kamala sticks up for Hulk Hogan, who is in the process of being removed from several projects for WWE.  Mick Foley praises John Cena for finishing his match this past Monday with a broken nose.  Daniel Bryan talks concussions. Adam Rose hints at Leo Krueger. Reddit makes a gift for Tyson Kidd.  Sunny adds to her wrap sheet.  Stephen Amell cancels an appearance scheduled for the day of SummerSlam, most likely to have a match with Stardust.  All this and A LOT more!  Tune in!