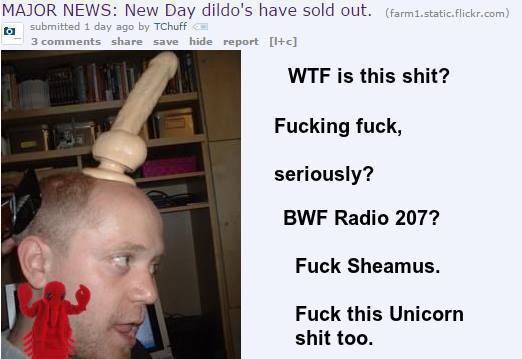 This week on BoredWrestlingFan Radio, technical issues nearly derail the early portion of the show as Guest_214 (Joe) is unable to log in or even change his name on the live show’s chat box.  G, Noyce, and Coester try to steer things back on course.  We talk pro wrestling, briefly.  Specifically how awful RAW was this past Monday.  Then we give our WWE TLC PPV picks the best way we know how.

In the news, Shane Helms compares RAW to WCW Thunder.  The New Day sell out – at the merch tables.  We discuss a possible “significant change” that may be coming to WWE SmackDown.  Rey Mysterio officially joins Lucha Underground, and Season Two officially gets a premiere date.  Joey Ryan’s dong doesn’t have a fan in Jim Cornette.  Val Venis gets his medical marijuana distribution license in Arizona.  All this, and much, much more.  Tune in!

This week’s break song was “Splash Woman” by Random.  Buy it here!