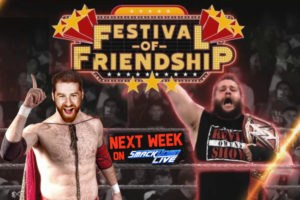 This week on BoredWrestlingFan Radio, JT gets an unexpected friend request.  Joe deals with an internet troll that’s NOT Mavenfan.  We talk about how boring baseball is while JT and G remind Joe of how many times he’s posted about the Yankees in the postseason on social media.  Joe tweets WWE Hall of Famer and US President Donald Trump.  We run down the Hell In A Cell results.  Drowgoddess catches us up on the latest in NJPW and ROH, after expressing her distaste for the Comic Sans font.

In the news…  well… not much, really.  We have a discussion about Neville leaving, and briefly touch on Jimmy Jacobs being fired for taking a selfie with the Bullet Club, but there’s not much else, other than our own Total Bellas preview!  Tune in!

This week’s break song was “Wannabe” by Jackknife Stiletto.  Buy it here!