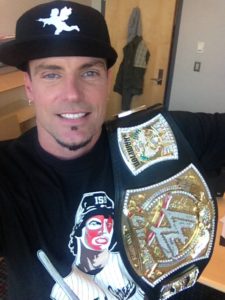 This week on BoredWrestlingFan Radio, we discuss things that happened on RAW and SmackDown, even though for the most part, we either didn’t watch or don’t remember.  We discuss the merits of Dr. Shelby – or at least we give our ideas of how the character could be better used instead of being involved in this angle with Bayley and Sasha Banks.  We discuss the lack of extreme on the current Extreme Rules card one week prior to the show.

In the news, we break down the heat between Nia Jax and Alexa Bliss.  A potential reason why Team Hell No reunited is revealed.  Bray Wyatt causes an accident but manages to escape relatively unscathed.  Brock Lesnar appears at UFC and challenges their Heavyweight Champion.  Ruby Riott and Bobby Roode appear to have injured their knees.  Hiromu Takahashi may have a broken neck.

Then somehow, some way, this show devolves into us talking about Vanilla Ice for 30 minutes or so.  Why?  Tune in to find out!