As news broke last week about the identity of the actress behind Claire Lynch (i.e. Julia Reilly), much of her demo reel, social media, and youtube videos have been taken down. While she’s been the focal point on TNA’s AJ Styles/Christopher Daniels feud, she’s a little more involved in the local area than previously known.

It turns out there is much more to TNA and Julia Reilly in relation to Universal Studios. Or so it would seem. We can only speculate, as this is the internet after all. But I think you’re going to dig this suckah!

As I was perusing the various web boards, I came across this interesting post by user “hlevin”:

“I was told by a worker last week that Claire Lynch, who is “pregnant” with AJ Styles’ “child” in TNA storyline, actually works at Universal Studios as Olive Oyl on the park’s Popeye Ride. Apparently this is something Lynch, whose real name is Julia Reilly, didn’t want out and has tried to conceal” 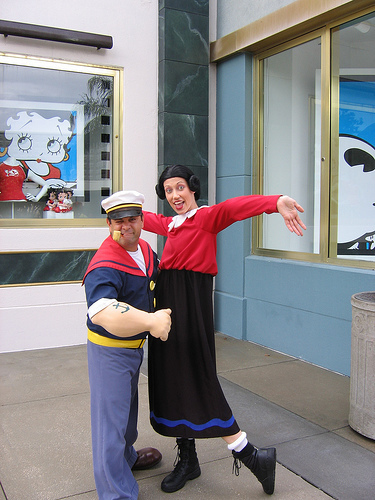 AJ Styles might have an argument that he is not the daddy, after all.