This week TNA goes SOA on us and for those not in the patch club should know that i talk of Sons of Anarchy: 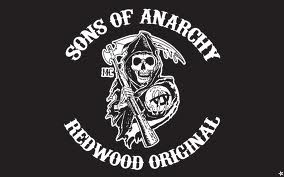 Aces and 8’s ride up on thier hogs and infiltrate the arena. And on Open Fight Night to take on Sting. And his friends. All this and James Storm after last week has been cleared of all the suspicision after taking a beating from the group last week.

After renaming the show Ass-whooping Show, the show began. Oh and they mention that Hogan is pissed and in the building.

Two members of the group show up and are let into the ring only to walk into a gang style initiation by the TNA roster. After taking a beating one member smiling through his blood pack tells them “:Thank You” and he was just patched in due to this. Sting hits him again.

So Ms Tessmacher calls out Tara so she can beat her teacher and prove herself. I should of been impressed but it was short and sloppy and I smell a tessmacher heel turn in the works, after Tara beats her with a superplex from the top. Oh and Tif–Taryn Terrell was there to officate.

The Camera Crew reshow The Pope getting beat down and show his twitter shoulder injury. Which sets up a triple threat match between AJ, Robbie and RVD since these are the men Pope was supposed to face. But first we have to get that pesky paternity situation out  the way with AJ and Claire.

Why is it out of order? Because I’m just happy that the story is finally over and we can move on. Claire is not present according to Daniels because she ruptured a placenta and AJ should be ashamed of himself for being a “Bastard” All this before a female attorney comes out and reveals this whole sorted affair of Daniels and Kazarian approached Lynch back in January and hatched the whole plan of getting AJ Drunk and spiking his drink and taking pics. But she isn’t even pregnant and wants the local authorities contacted and apologizes for the whole scheme. AJ goes off and kicks Daniels in the head and misses Kaz to proudly announce he is not the father. 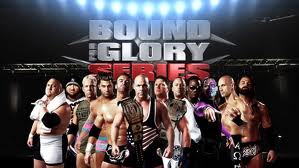 He we have the perpetual Jobber taking on two formidable opponent and Robbie E manages to pin RVD for the seven points. Maybe Hardy wasn’t a fluke.

Short, bad and he better not get a yes. I swear to God that he had a good story. But once in the ring he sucked worse than a jamacian bobsled team. Lets just hope that even though Gut check winners only go to developmental he should be passed on.

Oh Gunner won by the way. I guess this beats wrestling Garett Bischoff.

Not by much though.

Jeff Hardy gets revenge on Rob Terry in short fashion and we move on to..

Good Match between two charismatic guys that end when Anderson hits the mic check for the win. While this is going on Aces and 8’s are being fought backstage and when we think its done they call out in 3:30 they will unleash the Deadman’s hand. Sting and the TNA locker room come out in full force to face them. Aces and 8’s come through the crowd in vast numbers attacking the wrestlers. Aries gets his hand smashed between two chairs and when the original six stand tall in the ring Bully Ray of all people come out and clean house as Aces head back on thier bikes and high tail out of the arena.

Good show that kept the pace quick and thankfully ended the Lynch saga. Here’s to the next month before Bound For Glory.