After a break from the Thursday product, I’m back to review another episode of Impact Wrestling. I won’t lie to you, I’m a wee bit tired having stayed up late watching a bunch of idiots in Vancouver riot after the Boston Bruins won game 7 to capture the Stanley Cup. As a hockey fan, and a possibly former supporter of the Canucks, it’s embarrassing. So before I get to reviewing the show, I want to let any non-hockey fan out there know that this is not a normal activity or outcome… albeit some argue that the riots were going to happen regardless of who won that game.

Wrong show… the Saint’s do no go marching in… just the SWAT.

It’s the fallout (New Vegas?) from the Slammiversary IX PPV last Sunday are more or less marks the 9th anniversary of the TNA/Impact Wrestling’s debut on June 19, 2003. Coincidentally enough, my birthday it that day. Check out Pintnoir’s fantastic review of the event here. Pintnoir covered Impact for the last two weeks and will be resurfacing on Friday for Smackdown! Be sure to check back for all things wrestling on the other blue show.

Now, onto the wrestling! I hope!

I watch, write, suffer, and succumb to this show, yet have to remind myself of what happened only minutes after each episode. That is how G’s iMPACT reviews work. 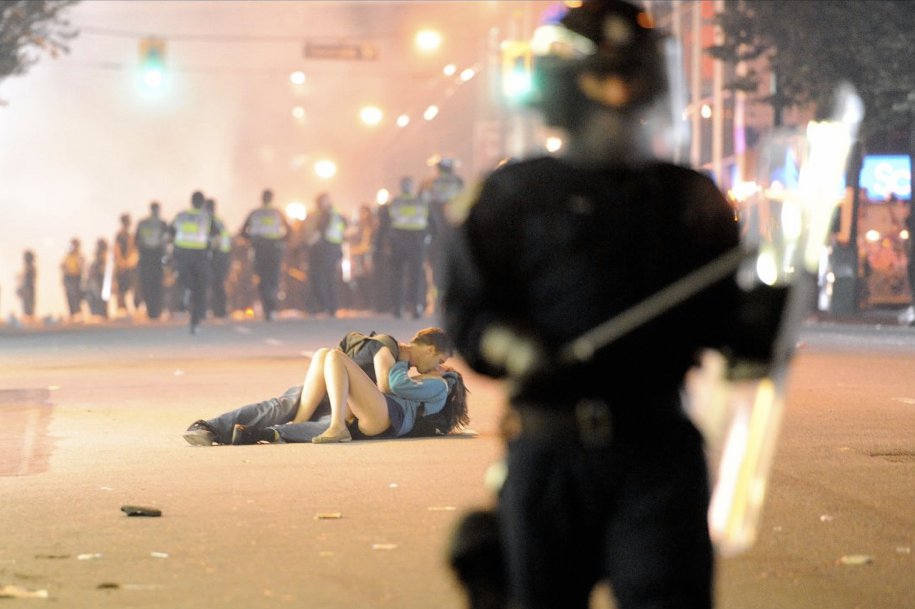 Amidst the riots, there were other things going on…

– Tonight’s episode is entitled: … there is no show name.

– Instead Mr. Anderson, your new Impact Champion (or something), enjoys a celebratory walk to the ring. Anderson is sporting a shiner on his left eye. He wasn’t in Vancouver last night… so… He’s a table full of food in front of him as Gunner of all people comes out. No sign of his pal. Gunner reminds us that Anderson asked for his help a week ago… Anderson seems to forget, as do I. Gunner wants his repayment. Anderson doesn’t need his services in the future, wished well on his future endeavors… backstage politics, other people are in line for the championship Gunner. Anderson throws water at Gunner who blades? Really? I guess water is deadly shit, but Gunner tosses Anderson through the table of food. Our opening segment is actually really short. Odd.

– * Devon vs. Hernandez. Why? Don’t see why this happened. They show up clips of a run in of some kind. I guess Devon is over as the Impact Wrestling Zone cheers? There is no reason to care about this story-wise. Everytime I watch Mexican America (did I get it right, this time), I wonder if the flag they hang blocks the view of the upper tier of the audience. I know the tickets are free with the Orlando venue… weak… Mexican America attacks so Devon gets the interference win courtesy of you pope, my pope, THE Pope, D’Angelo Dinero.

– Backstage, we see Mr. Anderson and Easy-E bicker. Nothing is resolved really. Meh.

G @Charles Barkley: “Dude, don’t the paint the town with that paint stroke. Most of them were complete idiots, and do not represent the whole fan base. You in jail again?”

– Angle is out. USA! Olympic wrestling medal run for Angle! We already knew that, but it’s offical. Patriotism, etc. Jeffrey Jarrett is out, and TNA is not big enough for both of them, and wants a match with out any of the family involved… Angle calls him a liar, a cheat, a scumbag, and “somewhat of a prick.” Angle notes that that PPV match was supposed to be the end of this, and now Jarrett’s word means nothing… and if Jarrett moves to Mexico during the show, and leaves the children behind, there will be some kind of match. Over-booked? Yes. Canucks fans riot.

Some important information via Impact Wrestling:

– Morgan tells Young there is someone way way way in the back who cares about that title. Zach Ryder? Nah… Not like being one of Eric Bischoff’s 10%’ers matters. Nor any of the fan of the Internet Champion for that matter. Even the WWE doesn’t care when they’re in his hometown with 3 hours to kill. And of course, Wrestling DOES not matter. Right? Boo.

– * Kid Kash vs. Austin Aries vs. Jimmy Rave. Yep, he got hurt for the failed ECW TNA PPV last year, but made it this week… Mr. Kash. Also Jimmy Rave, while Hemme stands on the sidelines. Guitar Hero fail. Hmm… And while you’d thing Aries is more concerned about the new ROH TV deal… well, we get a treat here. It is rushed, but we dominant Austin Aries to start! The editing starts to feel like an ECW spotfest as replays take over! Kash slows it down to a realistic pace… Aries hits a suspended and delayed brain buster (or whatever he calls it) to win and go to Destination X. Loved it, wish it was better paced.

Charles Barkley @G: “Ok, I was in Vancouver last night.”

G @Charles Barkley: “Yeah, saw you on the news. Good job, dumbass. Next time when the car is on fire, don’t jump into it via the sunroof.”

– * Knockouts Tag Team Title Match: Rosita & Sarita {C} vs. Miss Tessmacher & Velvet Sky. Hernandez and Not Homicide/Chavo-Guerrero are booted from ringside. I’m feeling bored already. Something about the rules kicks in as I try to stay awake….

Shannon will not be disrespected PatMan. No.

– Sarita surely attempts to hide Ms. Tessmacher’s inabilities here… Even though it is VASTLY superior to the garbage the WWE calls Diva action, we get a distraction angle allowing the Spanish immigrant heel team to win with ODB and Jacqueline (former WWE talent, however they choose to spell her name) running in to interfere. Everything becomes like downtown Vancouver last night…

– Sting and Hogan have words about the real “Hulk Hogan” backstage. Blah, blah… TNA has tried to sell this as Sting becoming remotivated in his feud with Hogan over Hulk’s sincerity. I could give a fuck, actually. And here’s why: Why have I watched these two for years? BOO! Don’t care.

– YES! As Wayne Arnold talks smack to Austin Aires, Eric Young questions the Wonder Years he had, as we ACTUALLY see Kevin’s big brother on camera. Young beats down Wayne, as he mocks the TV star. I liked this. Paul would be proud, as Kevin and Winnie would be hiding. “What would you do if I sang out of tune, would you beat down Wayne Arnold for me?” Answer: Yes.

– * Samoa Joe vs. RVD. First match in the Bound for Glory series listed earlier. No one wins here, as both should advance. BOO! The crowd likes the chronic, I suppose. After an electric opening defense by RVD, Joe reverses all of it with a suicide dive to the outside on the THC RVD. Another great spot has Joe casually walk away heeltastically as RVD crashes and burns on an attempted second rope 180 moonsault on the Samoan. Joe is looking as he should here, RVD as well… Joe looks to hit a Muscle Buster from the top ropes, BUT NO!!! RVD chooses both (see Towlie in his Southpark debut episode) and manages to reverse things, hit the frog splash and win! No complaints. Good match. A shame they faced each other in the first round, though.

I think a well trained Jedi would beat a Ninja Turtle. Thoughts?

– *Gunner versus Mr. Anderson. Yes. This happens. Does anybody care? No, of course not. Even Murphy (who is lucky I mentioned his non-Pal name agrees). Regardless, Gunner gets some offense and appears relevant. Falling… slowly… so slowly…. asleep. Yawn. While I have noted Gunner’s improvement, this is kind of a weak matchup. Lots of slow brawler spots…. As he should, the champion Anderson dominates… until he misses a 180 splash from the top rope and Gunner turns things around? Yep. I can’t take his gimmick seriously, even though Gunner looks good! MURPHY IS HIS PAL!! HIS FUCKING PAL! Not today, though… Anderson manages to turn things around and grabs the microphone from the sky mocking his opponent near the end of the match, but this costs him as Gunner F-5’s the champion and Eric Bischoff enters the Impact Zone applauding Gunner.

– When I think wrestling, I think Gunner? Nope, we move onto clips of Angle….

Nashville is likely enjoying the fact that nobody knows they exist while tire fires burn in Vancouver. Yep. Fuck you anarchist and Vancouver-drunks. Well done, sir. Pricks.

– Wayne Arnold interviews every single person on the roster backstage. Scott Steiner beats up people. As does Bully Ray. Etc.

– Jeff Jarrett and Kurt Angle fight in some kind of Urban Championship Wrestling Backyard Extravaganza and Kurt beats down on the Southernmost wrestler of the two. Gangs of people emulate the retarded Vancouver riots of last night as they roll around in the dirt like a bunch of drunken idiots. Awesome. They should have tied off their hands and used switch blades to make this movie reference accurate, but they didn’t. Fail.

The TNA logo comes up, and I’m out.

Wonderpod
A weekly podcast about the world of video games, from player experiences to current events in the industry, Bruce McGee, Pat Man, and Gun Sage provide insight into the medium for any gamer (whether casual or “pro”). Clicking the jump will take you to the iTunes page!