Hot off the heels of a turrible pay-per-view, Impact Wrestling returns to the airwaves to torment and torture us all. A few notables to consider coming off of that show, is that Angle retained and Sting is not your new champion. This means the Hogan/Sting debacle that should occur at Bound For Glory will not involve the belt. Of course, that is provided that Sting defeats Ric Flair tonight. If you’re wondering about the Bound For Glory tournament, it turns out that Bobby Roode is your winner. I’m not going to even bother to describe how badly TNA screwed up that thing… Let’s just get this crap over with.

Also, check out this comic by Biff Zongo about wrestling. The tag team comic writers have been kind enough to post their work over at Wonderpod-Online.com.

I watch, write, suffer, and succumb to this show, yet have to remind myself of what happened only minutes after each episode. That is how G’s iMPACT reviews work.

– Ric Flair comes out in his ring gear, and calls out Sting. “Tonight, you versus God,” points out Flair. Flair reminds us of the stips on this match, and Sting screams in his face that Ric is going to die tonight. You might notice I am not referring to him as Heath Farley. Sure, he still has the Joker face paint on, but this is not that incarnation of Sting. He’s been doing this switching in and out of the persona lately… Security has to restrain the men and we cut to Jeff Hardy walking backstage, and then commercials. Great opening segment, it’s all downhill from here.

– * D’Angelo Dinero, Devon, Brooke Tessmacher and Tara vs. Sarita, Rosita, Hernandez and Anarquia. On one side you have a legit faction (shitty, but legit). On the other, you have a random pairing, including My Pope, Your Pope, THE Pope and Devon who were feuding and had Devon’s family involved… and now everything is seemingly ok. Devon’s kids are ringside. Tessmacher is wearing the generic Impact Wrestling shirt that Gunner wears (because both are precisely that, generic). She rips the shirt off, a la Hogan… Devon is in amazing shape these days, the guy has lost a ton of weight and moves around the ring as if he is ten years younger. Anyways, the men do almost the entire match’s work. The women kind of get involved at the end, and the random pairing team wins.

– Traci Brooks and Karen meet backstage playing off the power struggle, after some YAWN banter, Karen orders her to bring the Knockouts to her. Fuck this. Anyways, most of them are assembled backstage as a result… sans Winter and Sarita/Rosita. Karen announces the Queen Qualifier tournament. The winners of the qualifying matches will face Winter for the title at Bound For Glory.

The tamirans are wondering why I am watching this too…

– Fourtune is assembled in the ring, all five of them, and it’s to celebrate Roode’s big number one contender win in the B4G Tourney. Since most of the tournament got “TNA’d” by illogical booking, most of the facts AJ uses to put over Roode are flawed. But, in all fairness, it’s awesome to see Bobby elevated. The guy has everything going for him these days, it’s about time. Daniels puts over Roode while taking jabs at AJ. Kaz puts over his hard work… then Redneck Jesus talks about the two partner’s history over the years and sincerely congratulates him.

– Just when you thought there would be a happy moment in TNA, out comes Kurt Angle. Angle gives him credit for his win, but questions this positiveness. “What are you guys, the five musketeers?” Kurt Angle CAN do math too! Just can’t drive sober, apparently. Kurt questions how happy they really are, since they are all here for the title. Angle announces he has used his stroke to book Roode in a series of matches each week against one member of the faction… this week Roode will face Kaz.

This show seems to go round and round, but rarely stops anywhere… except to build ancient guys like Hogan and Sting. Ugghhh.

– Backstage Bischoff and Angle cackle about the previous segment. Great.

– * Velvet Sky vs. Angelina Love. Uh oh, the PatMan rule is in effect: 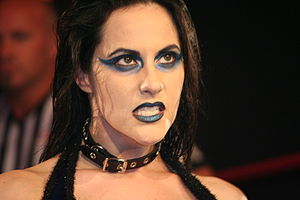 Rules are rules, even when they are modified rules of older rules. I’ve posted them before.

– Looks like Hemme has returned to her street walker clothes this week. Oh well, the class is gone. Winter comes out to observe the match, with her interest being that to get her ally Angelina in the match for the PPV. Velvet is attacked before the match starts… and the two brawl outside. Good thing Earl Hebner is refereeing this match! He’s so senile in the ring these days, this may have well have been a no-DQ. Winter’s interference results in Angelina taking a belt to the face, and a DDT for the pin and win by Velvet.

– Backstage Hardy goes to talk to AJ, who rips him a new one about doing drugs and making the program look shitty. Then we get Flair talking with Hogan, and Heath Farley pops in for a second. Nothing special here. Then we cut to Taz/Tenay interviewing Crimson via Satellite (yeah right) about his injury taking him out of the tournament with a hairline fracture via Samoa Joe. Crimson claims Joe made it personal, and in two weeks he will return… well technically he will return last Tuesday since TNA taped three episodes in a row. 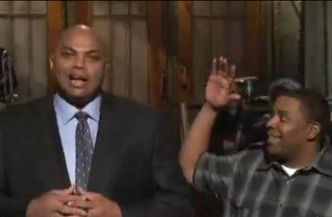 Charles Barkley @G: “Dude, I’m getting swarmed by the infected, where are you?”

– * Samoa Joe vs. Matt Morgan. Not too much here. Morgan gets a little offense in, until Joe submits Morgan. Meh.

– Another Dead Island commercial reminds me that I’d prefer to be playing that game right now. It’s pretty awesome, actually.

– Kurt Angle approaches Kaz about tonight’s match. Meh. Devon rants at Hardy about their past and being buddies on the road and to stop being a total fuckup. And if he has to put him through a wall to get it through his head… well let’s just say it’s a good thing Hardy is off to jail… but as a dejected Hardy walks away, Devon notes, “You need me… I’ve got your back… I’ve got your back.” What a good friend. Sadly, this G is going through something like this with one of his bro’s right now. Shitty.

Dead Island is calling my name…

– * Bobby Roode vs. Kazarian. Catch-as-catch-can to start… and I can’t complain in the slightest. This is a tight match with high potential to be good. This is a fantastic bout, that ends with Roode defeating Kaz. This stole the show in my mind, and featured the diversity of the talent in the ring. I’d bitch about the lack of time allotted, but you already knew that. Should’ve been the main event.

– Kaz shakes Roode’s hand backstage. “Good work,” he notes and then starts smashing everything while screaming that his wife screwed Bischoff multiple times to try and get a job. Well that last part didn’t happen, but it should’ve.

– Bully Ray and Jerry Lynn talk smack about Anderson “sucking in general” and that how they will mess them up tonight. Entertaining bit, but again nothing special…. The spoilers told me we should expect to see, “* Bully Ray and Jerry Lynn vs. Ken Anderson” tonight… but since they are taping three weeks of the show this week split between two days, I’d expect we see that one sometime in the future with RVD added to Anderson’s team of apathy. Why? BECAUSE WOOOOOOOOOOOOOOOOOOOOOOOOOOOOOOOOO!!!!!!!!! Flair is out to wrestle, so it’s mainevent time. Not excited about this at all…. It’s been telegraphed that Sting wins… and the combined age in the ring exceeds one hundred fucking years. So yeah, there’s that.

I can totally relate to Tired Mario Mario here. This show won’t end.

– * Sting vs. Ric Flair. The first segment is all about old people pushing each other. Meh. It’s a chop-fest, folks. I didn’t expect much from this one, and that’s precisely what we got. Not that I expected any massive spots from the old folks home. There was this weird rest period where Flair must have held down the “B” button to power up his attack on Sting, and both men effectively killed a minute of this 6-7 bout doing nothing. Flair attempts the Figurefour leglock, but no! No caps lock for that part. But this also kills another couple of minutes… MEH! CAPS LOCK INDEED!! Sting “Hulks” up and reverses the lock by rolling over. That shouldn’t really make a difference, BUT IT DOES! FUCK. FUCK. FUCK. Sorry, but, FUCK. I opt to go into 1/4 FFW speed on the rest to attempt to make this feel like real time… Enter Hogan attempting to mess up Sting’s challenge. Flair is pissed that his bald-old-doppleganger is out here too… Flair does his flop spot, while Hogan is shown concerned since doesn’t own a medical alarm unit. This allows Sting to lock on the Scorpion Deathlock and the win. Shocking. Time to go kill zombies…

The Impact Wrestling logo comes up, and I’m out.