Last year, TNA Wrestling launched a series of summer live events at baseball stadiums, and called it the BaseBrawl. A great thing about these events is that if you buy lawn/floor/ringside seats, whatever you want to call them, you also get a meet and greet with a majority of the stars on the roster. You can also buy an elite package, which will get you a limited edition baseball bat and a personal meeting with the event’s major star. Last year in Buffalo, that was Hulk Hogan, this year, Jeff Hardy. But, enough shilling the event. 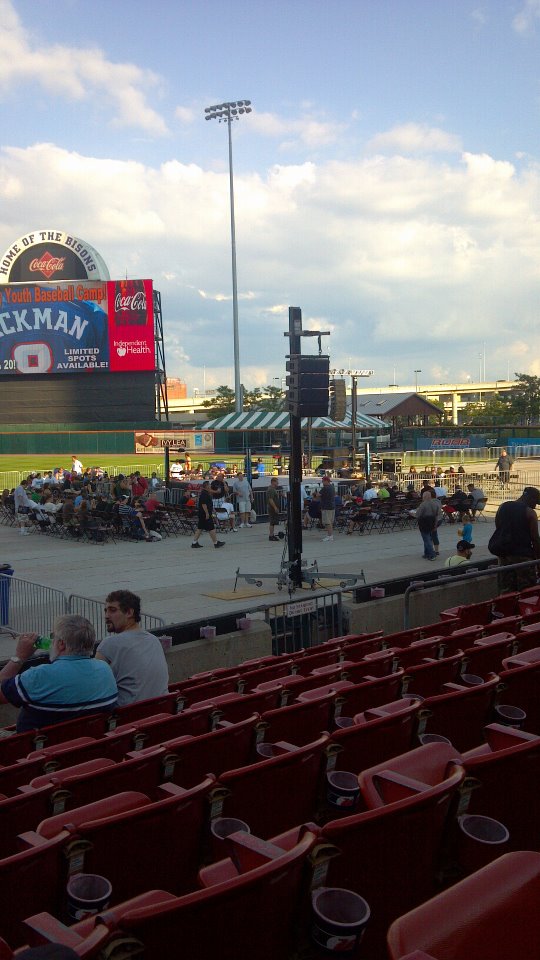 and the pretty decent view I had from my seat!

Jeremy Borash handles the ring announcing duties for the evening, and up first is an X-Division match!

Ion really loves that hairspray, doesn’t he? These are two guys you want to have open your show and get the crowd going. And the crowd got going with chants of “Carlito” and “You’re not cool” directed at Zema Ion. Poor guy has no traits in common with Carly Colon other than the afro and the orange pants, and he’s got to hear this every night. The Buffalo faithful were solidly behind The Greatest Man Who Ever Lived, who picked up the victory with a brainbuster. After the match, JB gave a backstage pass to somebody who brought a sign in support of Aries.

JB gives a big introduction to the most controversial referee in the history of professional wrestling, Earl Hebner, who, for some reason, comes out to “Man In The Box” by Alice In Chains, which is of course Tommy Dreamer’s old theme song. The Buffalo faithful get on Hebner’s case, chanting “You Screwed Bret.” JB holds Earl back as he looks to go after a few of them – but then he takes off his referee polo to reveal a t-shirt that says “Damn Right I Did!” Earl’s here to referee a Knockout’s Title match. Yes, that’s the same spot they did last year.

Kim works over Tessmacher’s leg through the whole match, but Tessmacher manages to pick up the win with a neckbreaker out of nowhere to retain her title. Great match!

We’re told that the Spike TV cameras are rolling and that highlights of the following match will be seen next Thursday on Impact, as it’s a part of the Bound For Glory series! Mr. Anderson is introduced first, and he calls for his microphone to be lowered – in a roofless stadium. JB climbs up onto a chair and hands him a microphone, and he does his “asshole” schtick. He begins his introduction, but somebody yells out “Kennedy,” to which he replies, “oh no. No, that guy died in a train wreck. And you can still watch that train wreck every Monday night!” Burn! Anderson’s opponent is Samoa Joe, who is wearing his Nation of Violence gear again for some reason. Did I miss something?

The crowd started off very quiet for this one. I think it’s because they weren’t really sure who they wanted to root for. Eventually, they decided on rooting for Joe. This was another match, really worth the price of admission. All the usual spots are there, and in the end, it’s Joe with the Muscle Buster for the victory, and seven points in the BFG Series!

And our next match is for the TNA Tag Team Championship! The former champions, Kazarian and Daniels come out first, and they cut a promo badmouthing Buffalo, with Kazarian saying that we don’t have a big league baseball team because there’s nothing big league about this town. Daniels is less harsh. He says that the fans are disappointments to their mothers, but the biggest disappointment is that Kurt Angle and AJ Styles are walking around with their tag team titles. Angle and Styles get their entrances, and we get our tag team title match.

These are four of the best wrestlers in the entire industry, so you can imagine that they put on a great match. The crowd was mostly behind Angle & Styles, though a small “Angle Sucks” chant broke out in a very localized cluster in the stands. Styles picked up the win for the tag champs with a Styles Clash.

I didn’t catch the name of the guy pitching the merch this year, but he was good. Don West may be gone, but the Brown Bag Special remains. This year’s bag costs $30, but in the bag you get FOUR TNA DVDs and an Impact Wrestling t-shirt, which is where the bag used to stop, but this year they added in a random TNA action figure and a TNA 10th Anniversary program. Yes, that’s about $120 worth of stuff for $30. My wife surprised me and came back from a bathroom break with one – which she didn’t have to do, because I would have bought it myself. The pitchman mentioned a fan wearing a Triple H t-shirt, and told him he should buy a Brown Bag Special so he could get the Impact Wrestling shirt and “cover that hideous thing up.” Love the friendly little jabs at the competition tonight.

We return to action with another match in the Bound For Glory Series. Robbie E is introduced first, and enters to a chorus of “We Want Ryder” chants. James Storm makes his way out, and Robbie E grabs the microphone. He says that all the people in Buffalo came to watch him fist pump. For some reason, a “YES!” chant breaks out during this promo. Robbie E starts to dance and fist pump in the ring and offers Storm a chance to do the same. Storm says he doesn’t fist pump, he drinks beer. He makes a few jokes about Robbie’s pink ring gear and the fist printed on the ass of his tights. Robbie says he can chug beer. Storm challenges him to do so. Robbie starts sipping the beer, and Storm hits him with the Last Call. The bell rings.

Storm covers Robbie and pins him while sipping a beer. Seven points for The Cowboy!

It’s time for the main event of the evening, a match for the TNA World Heavyweight Championship. My wife screams her heart out as the challenger, Jeff Hardy, makes his way to the ring and poses for the crowd. The TNA Champion, Bobby Roode is introduced to a chorus of boos. Roode demands the proper respect to be shown to him, or he will leave and go back to Canada. Some fans bow down to the Champion, some point to the thruway just outside of the stadium that leads directly into Canada.

The fans are solidly behind Hardy in this one, and with good reason – Roode plays the cowardly heel to a T. “It factor?” Yeah, I’d say so. The crowd was definitely into this one, mostly chanting “Let’s Go Hardy.” At one point during the match, Roode and referee Brian Hebner got into a bit of a shoving match, which prompted a “Let’s Go Brian” chant. Speaking of, Hebner got knocked down, and Gunner ran in to attack Hardy, catching a Whisper In The Wind for his troubles, but Roode nailed Hardy with a low blow and picked up the pinfall victory to retain his title.

Hardy hit Roode with a Twist of Fate to end the show.

One of the cool things that TNA does, is after the show they allow fans to have a photo opportunity in the ring with one or more members of the TNA roster for a small price. Tonight it was Jeff Hardy, my wife’s favorite wrestler since she was a kid. The way this works is that you pay $20, and everybody that is with you can get in the ring and get their photo taken at the same time with Hardy. We couldn’t pass this up. They try to rush everybody through, and the line definitely moves very quickly, but Jeff was very cordial, taking a moment to give my wife a hug and shake my hand. When you get out of the ring, they have the photo waiting for you. 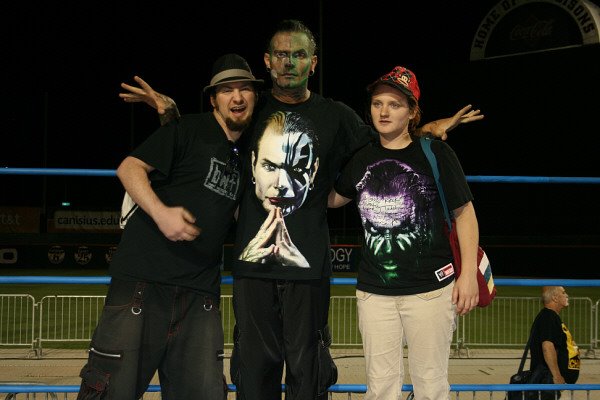 We poke fun at TNA sometimes for inconsistent television here on BoredWrestlingFan from time to time, but one thing I cannot deny is that the live events are consistently entertaining. The two that I’ve been to have been some of the best live wrestling experiences I’ve had – and I’ve been to three WrestleManias. If the company brings a live event to your area, I definitely recommend checking it out – and bringing some extra dough to participate in some of the extracurricular stuff they have going on. Definitely worth it!