With how good the E has been lately, I don’t know what to expect from Impact.

The show starts with Dixie entering the arena. She was in an actual limo too, so I guess they CAN afford them. MVP is in his office and says Joe isn’t in the gauntlet match, but he’s been replaced. Whoever wins gets a title match at Sacrifice.

10 Man Gauntlet (Royal Rumble) match for the number one contender spot
The match starts with Storm and Gunner, who just beat the shit out of eachother. Bobby Roode came out third and Beer Money  reforms as Roode focused on Gunner. Bully Ray comes out next and saves Gunner. It turns into 2 on 2 until Ethan Carter comes out, watching his back for Angle. Apparently Angle threatened him on Twitter. Ethan goes after Bully but gets overpowered quickly. The next man out is Bobby Lashley, who just has his way with everyone. Next out is Abyss, because this makes no damn sense. Magnus comes out to sit on commentary about a minute after Abyss came out. Eric Young and Seiya Sanada joined the Gauntlet too. The final comptetitor is Willow. All ten men are out, and no eliminations yet.

Spud rolls out to the ring in his wheelchair and eliminates Willow by standing up and pulling him off the apron. Willow chases him out as Abyss tosses out Sanada. Bobby throws out Bobby, as Roode eliminates Lashley, only to be eliminated by Bully Ray. Bully shows off and pays for it as Roode and Ethan drag him out the ring. Magnus was pretty awesome on commentary. Storm Superdicks Gunner and throws him out the ring. We’re down to the final four of Abyss, EY, Ethan and Storm. EY gets triple teamed and Ethan tries to throw him out. EY skins the cat and uses his legs to get Ethan out the ring. Storm tries to skin the cat like EY but EY drop kicks him to knock him off the rope for the elimination, leaving us with just EY and Abyss. EY puts up an epic fight and manages to knock Abyss out the ring with a clothesline for the win. 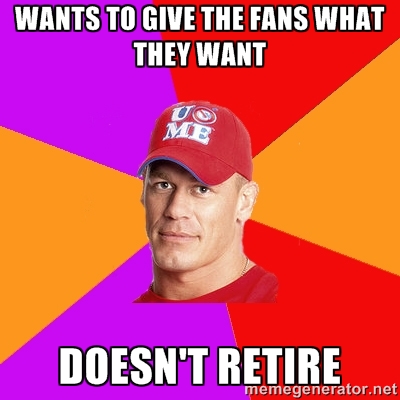 Post match EY says he has a request for MVP and calls him out. EY says he’s feeling crazy tonight and he wants his title match tonight. He’s been waiting 10 years and that’s too long. I want to point out he’s also injured, his right arm is hurting. MVP agrees and tells Magnus, who was still on commentary, to get ready. Magnus says that it’s okay because it’s Magnus Rules. MVP says there aren’t any Magnus rules tonight. He can and will lose the title via DQ and countout, Abyss is banned from ringside and if anyone interferes they will be fired on the spot.

Rockstar Spud is backstage with a surprise party for Dixie’s return. She walks in the room and feels he over did it a little. She tells him off over his tribute, thinking that he swapped sides pretty quickly. She tells him to clean up and walks out the room, closing the door. Spud goes to follow her but he’s attacked by Willow when he opens the door.

ODB vs Gail Kim vs Brittany vs Angelina Love for the Number One Contendership of the K.O title
It’s Wrasslemania all over again! A multi man Battle Royal and a multi woman first fall to a finish match. Everyone pairs up with Brittany going after Gail and ODB going after Angelina. I hope she breaks her. She just throws her out the ring and challenges Brittany to a punch out. It’s typical four way fare; Throw someone out, double team, turn on eachother, rinse and repeat. Brittany was pretty fun to watch at least. Flippy shit ahoy! Velvet sprays Gail Kim in the eyes and Angelina puts her down with a mean kick for the win. 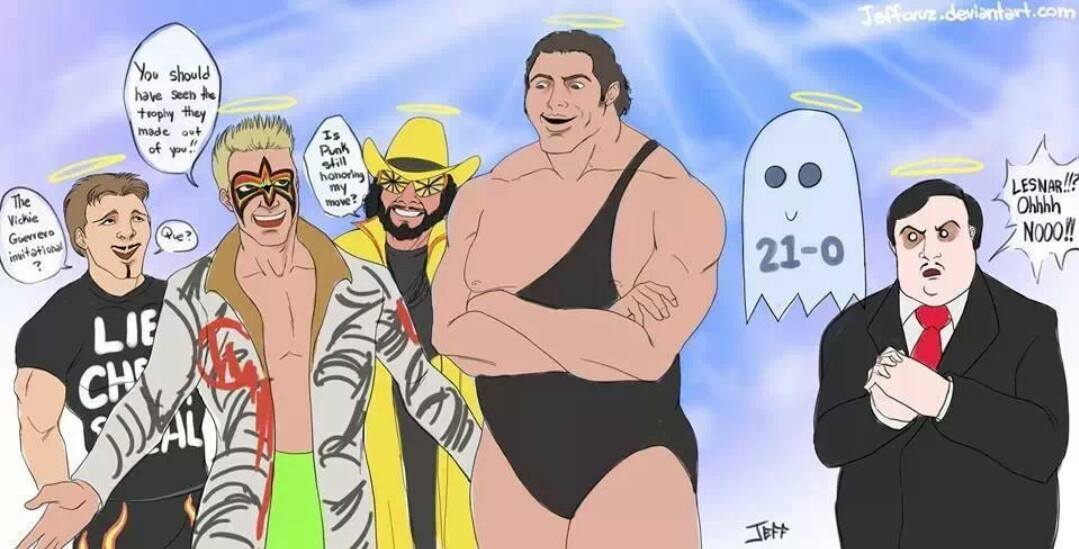 This hit me right in the feels. RIP Warrior.

MVP is backstage on the phone when Dixie walks in. MVP threatens to have her taken out by security. Dixie chastises him for attacking King backstage, saying MVP stands for “Massive Violation of Power”. She says he’ll fire him when she can. First she’s going to take care of who screwed her over, and wants him to watch so he knows how it feels when she does it to him. Not too bad for a Dixie promo.

The Wolves have a new haircut! Now I need to know which one is blonde. They walk into MVPs office which now contains the douchebag Bromans, minus Robbie. His flight got cancelled so he can’t make it, so they still have no title match. MVP notices Jesse has both titles and he says Robbie has until bell time to get to the ring because the match is still on. If Robbie doesn’t appear, then Zema Ion will take his place.

They replay clips of EY winning and getting his match. It was weird without commentary over the top of it explaining. Magnus is backstage and says that EY made a huge mistake by asking for the match tonight.

It’s Dixie Carter time. Because a month is too long for her to be gone apparently. She calls out Bully Ray, to no one’s surprise. I can’t believe they were acting like they had no idea who she was talking about. I’m so glad fans aren’t as retarded as the commentators. I spot someone in the crowd who’s wearing either a Power Rangers shirt, or the Xavier Woods shirt that you can get at Bookertees.com. That’s Bookertees.com. While you’re at it go to Amazon and get my new book A Chest of Childhood. I plan on printing a short story every week, and I WILL be prostituting them. 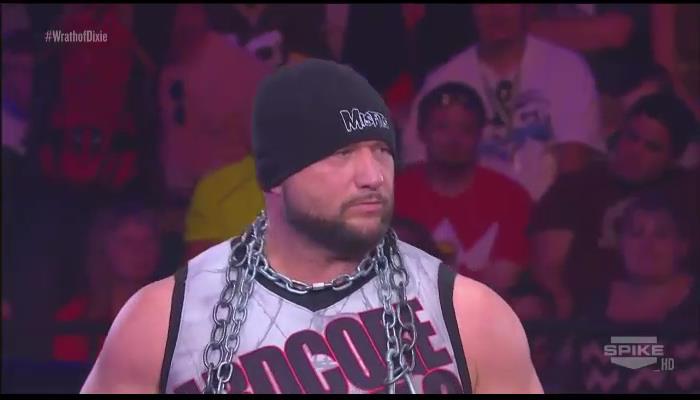 I think it might just be a power rangers shirt.

The crowd actually chants for Bully to put her through a table. He’s shocked she’s actually standing next to him. She wasn’t at the office when she called him last. Dixie calls him stupid for getting tricked by Bobby and being beaten by him too. Roode put him through three tables and that’s never happened to him before. Bad News Bully has some bad news though; he’s still standing there. Dixie plans to fix that, but wants to know why he betrayed her. Bully gets in her face for calling TNA her company, and says it never was. It belongs to the fans and to the wrasslers. Bully says that the fans and wrasslers respect him even if they hate him. Dixie paid him a lot of money to fix the match, and she wants it back. Too bad he bought a car and went to the cabaret with it. Bully goes to ask Dixie if she knows who he is, and Dixie interrupts him, saying she’s still in charge and the boss. She slaps him like a girl. She should take lessons from Steph on how to slap people. Bully approaches her in a Sam Shaw style and gets taken from behind by Bobby Roode. Not in a Sam Shaw style though. Dixie tells Roode to grab a table. Roode sets one up but Bully tries to put him through it. Roode slips out and runs off and Bully teases putting Dixie through it instead.

No word of a fucking lie but they cut to a backstage segment with Dixie and Bully Ray. That’s just awful. I guess Bully let her go or something. Magnus asks her what’s going on because she didn’t even say hi. She’s on business that isn’t him, but he’s the champion. He IS the business. He wanted Dixie to wish him luck, but Dixie says he doesn’t need luck. She plans to go home and get drunk. Magnus calls her a typical woman and Dixie gets in his face for forgetting her and abandoning her, and that’s why she’s leaving him alone. He leaves saying “I don’t need you anyway. Wrath of Dixie my arse.” Epic.

The Wolves vs Bromans for the tag titles 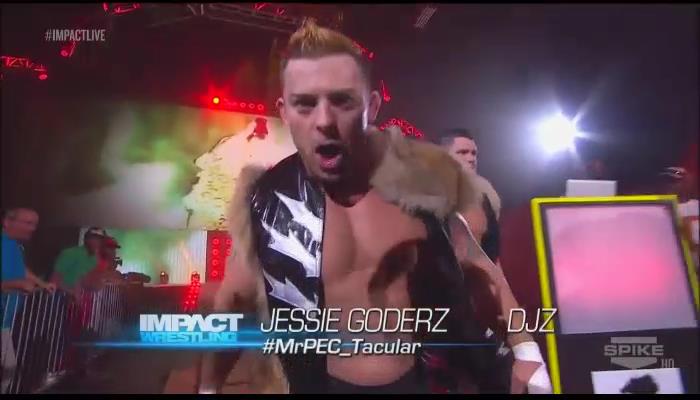 What are production values?

Christie Hemme is backstage and she’s asked about something she did with Samuel Shaw. She tweeted or some shit. She wants to meet Samual in the ring to talk about commitment. Plot twist; she’s committing him to a mental institution. I’m calling it now. I write this stuff live yo.

Hemme is, of course, in the ring and she calls out Samuel Shaw. Shaw obliges and stalks his way to the ring. Hemme asks the crowd to not chant creepy bastard at him. She says she’s had a change of heart and Shaw is misunderstood. Shaw says he’s none of the things the crowd call him, he’s the love of her life. Hemme asks if Shaw trusts her, and if he’d do anything. She asks if he’ll go anywhere he wants her too, and bites his glove off. She tells Shaw to close his eyes and feel her. This was awkward as fuck. I don’t like to swear in my reviews, but it’s the only word I can use. A white van with “PSYCHIATRIC SERVICES” on it appears backstage. I called this! 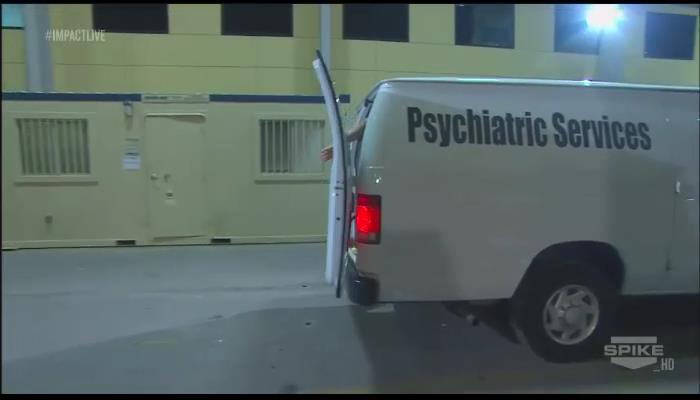 Willow promo. Willow doesn’t care about winning and challenges both Spud and EC3 to a match next week so he can get revenge.

Eric Young vs Magnus for the World Heavyweight Championship
Magnus starts strong and stays strong. Magnus starts attacking the arm, and throws EY into the steel steps. Magnus stays in control for pretty much the entire match. He even said “The paper champion is in control” at the crowd. EY turns a humbling camel clutch (or some variation thereof) into an electric chair to start his comeback. EY gets some good offense in, finishing with a top rope elbow for a two count. Magnus hits a Mikonochu Driver but doesn’t get the win. He gets frustrated and teases hitting EY with the belt. The ref takes it off him and Magnus hits the low blow while Hebner is distracted. Only a two count. EY hits a Pile Driver of all things and picks up the win. Eric Young is your new TNA World Heavyweight Champion. The celebration is what takes us off the air.

It was a pretty decent show, even with the production errors and cheap shit. I wanted Magnus to be champion but I’m not too sad he lost. I think his reign was a bit of a joke. I wanted more from him as champ. I wanted a dominating champion, not some chickenshit heel. Let’s see what they do with EY as champ. 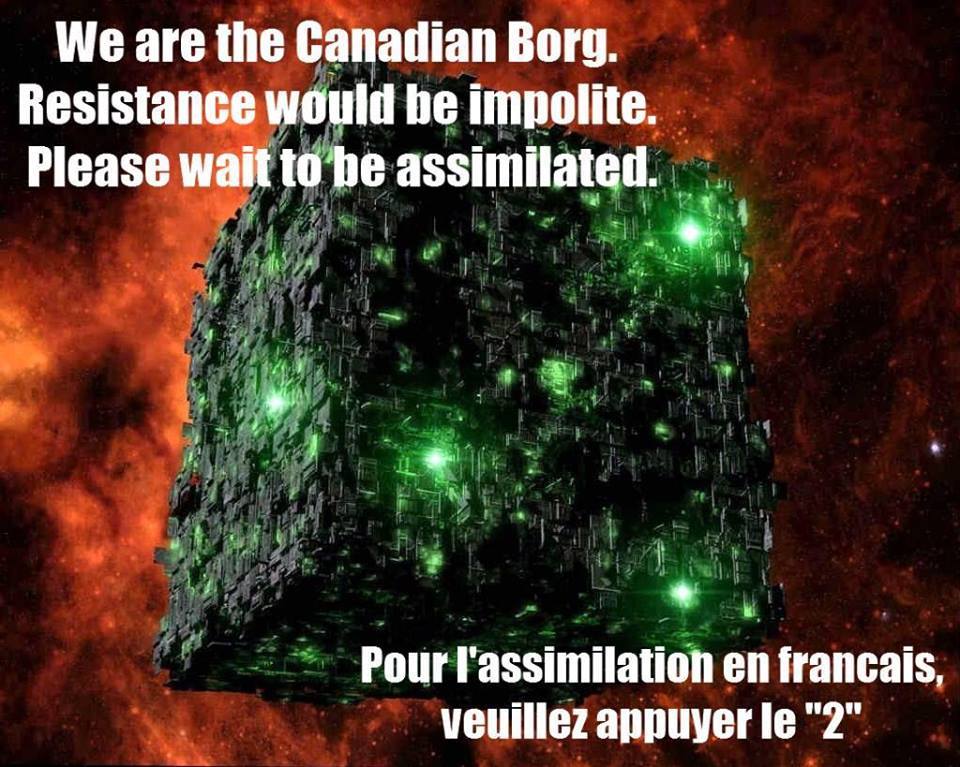 The Canadian Borg are watching you, unless you don’t want them to.