The show opens with your new champion B.Y (that’s B for Bryan) coming to the ring. He says the belt represents a lifetime of hard work, and everything he’s done has lead to this moment. He’s going to be a champ for the fans, and he’s going to pay the fans back with the belt. I think he’s going to pawn it or something. He’s going to defend the belt a lot and his reign is going to be a party, a party interrupted by the Prince of Bitches Dixie Carter. She congratulates BY and says she’s to thank for him becoming champ. She saved his job eight years ago or something, and she invented the beard. She made them fashionable LONG before everyone else and she needs royalty checks from EVERYONE who infringes on her copyright of the beard. B.Y reminds her MVP is in charge and says they don’t need her. Dixie promises to remedy that, but B.Y represents her. He’ll go wherever Dixie takes TNA. B.Y says he hopes she has puke bags because he makes her sick. Dixie wants him to hold her in high regard and B.Y says he’ll flush her like he would any piece of crap. Dixie wants him to honor and obey him, but B.Y doesn’t obey and honor anyone. He won’t be a paper champion, and makes a Dukes of Hazard reference. Dixie says he needs to be relevant and she’s going to give him a makeover. If he says no, she’ll go after O.D.B instead. B.Y says she gets one warning, and Bully Ray comes out to the ring. 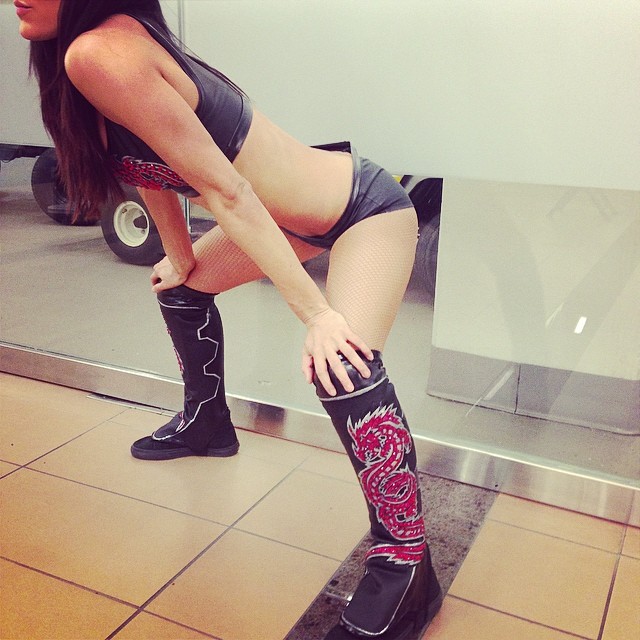 Bully apologises for interrupting B.Y but he really wants Dixie to shut the hell up. He says B.Y is a role model for wrestlers who are put down by bad bosses. Dixie says he took her money and double crossed her. He’s got no right to talk like that. Apparently Bully spent that money in a strip club. Hookers and blow people. Hookers and blow. Bully reminds her that he almost put her through a table, and sings Dixie out of the ring with “Hey Hey Goodbye”. Bully hypes up B.Y and says he doesn’t like many people in the business, but he likes and respects E.Y and gets the crowd to chant E.Y to end the segment. Normally I hate TNA having long promos to start the show but that was fun. 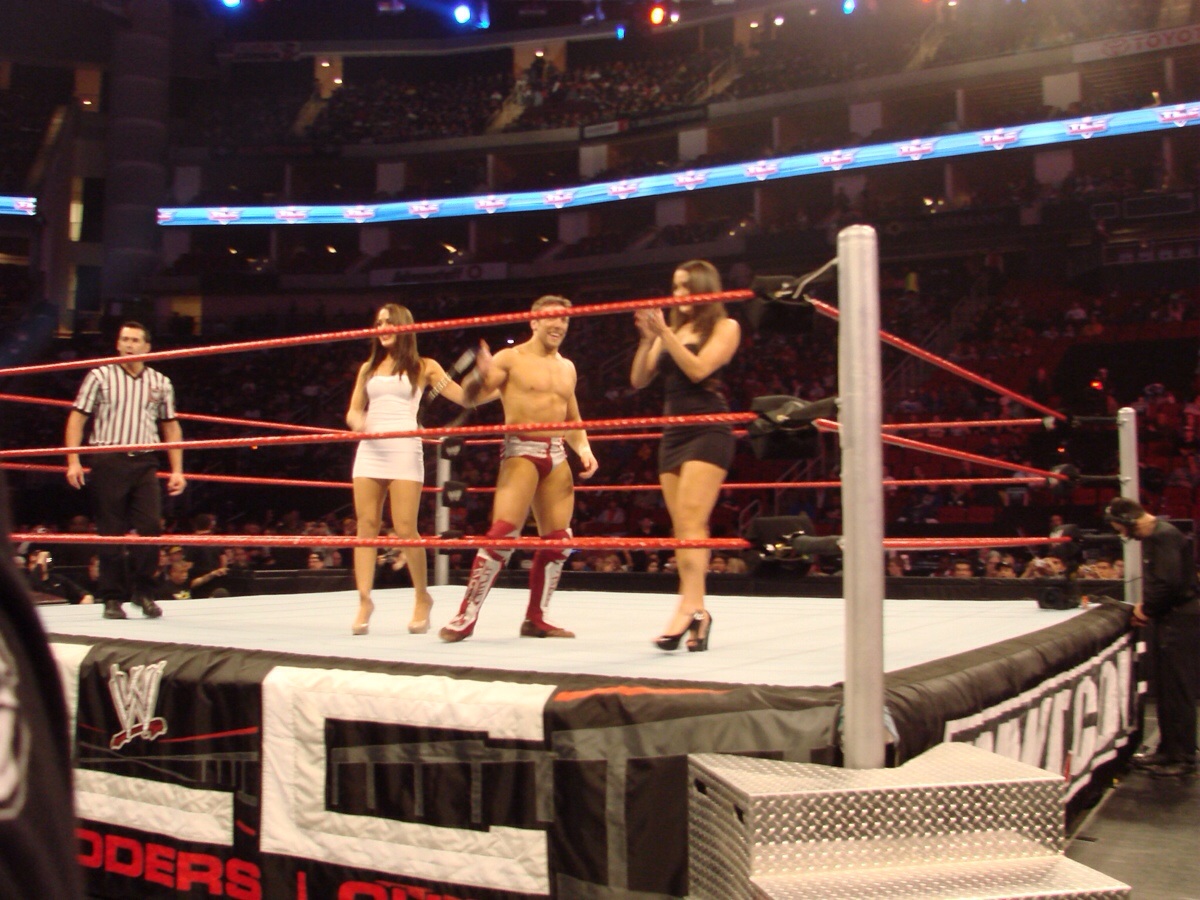 I actually forgot Bryan was paired with the Bellas in kayfabe.

Velvet Sky vs Madison Rayne in a Street Fight
Velvet waits at the bottom of the ramp with Kane, but Madison jumps her from behind and takes her by the back door. Things end up in the ring and no one really cares about the stip. Angelina even stays nicely out the ring. There’s minor weapon useage and minor Angelina involvement. Rayne goes to town with a trash can, avoids a Kane assault, and hits a spear for the win.

B.Y meets Bully backstage and thanks him for what he said. Bully says he still has some money left and leaves for the strip club. Abyss comes up from behind B.Y and says he’s worse than he’s ever been, and asks him for a title match. He then smells B.Y. Eric says he’ll do it in a Monsters Ball match. Pretty sure those require a 24 hour waiting period. You can at least stick to your own rules.

Rockstar Spud is also backstage, looking for Ethan. Ethan has a shirt that just says “Trouble” on it a lot. Ethan asks Spud if he’s afraid of Hardy, and has every right to be. He reminds Spud that HE was the one who pushed Jeff off a ladder. Ethan crippled Angle and tonight Spud is going to end Hardy’s career because he’s a lion. 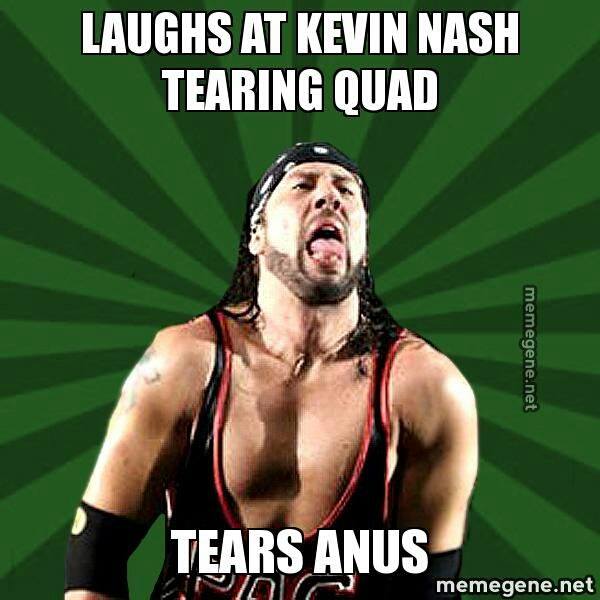 And it wasn’t Chyna who did it.

MVP gets a jobbers entrance and is randomly in the ring. He congratulates Eric and brings up the name Sam-O-A Joe. I just wrote it how he pronounced it. He says Joe hasn’t called him, or returned his calls. If he’s disgruntled he should call and talk to M.V.P. Another disgruntled employee comes out, Austin Aries. He calls himself the most disgruntled man who ever lived. He cuts a promo using the prompts of Motivate Validate and Participate. He wants some answers. MVP says he made his bed by screwing him, and needs to lie in it. Aries asks if that’s why he’s being screwed over, but doesn’t really get an answer. MVP takes his jacket off and they tease fighting. Aries says they’ll do it next week. He’s not stupid, and won’t fight with a convicted felon. Instead he’ll wrestle one next week.

The Wolves vs The Bromans for the Tag Team Titles
I don’t give a damn at this point. Wolves start strong, but don’t stay strong. Richards gets tag teamed until he gets the hot tag and Edwards shredrapes both Bromans. The Wolves hit a double foot stomp and DJ Z whacks them with a chair for the DQ. I continue to not give a damn about the titles. I saw this coming. The actual defense will come at Sacrifice.

Some Willow promo airs about dirt sheets, Rockstar Spud, and EC3. Did you know you can buy a Willow Umbrella from the TNA store? 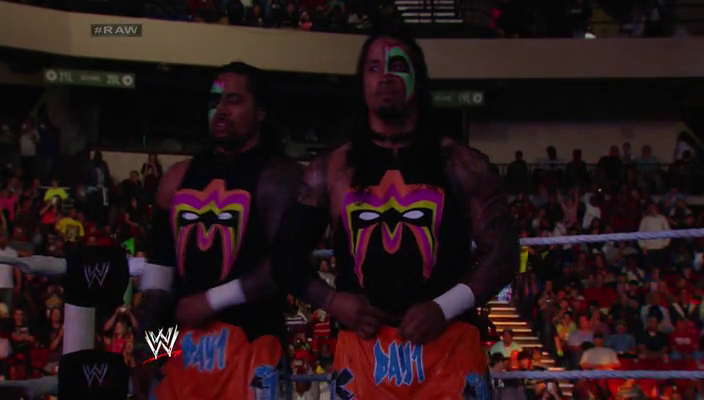 That’s right Mr. Uso, YOU can own a Willow Umbrella!

There’s an emotional video from Eric Young that was ruined by production values. The background music was too loud, and in the background of the video was Madison Rayne’s music. Get your shit together TNA. Please.

Ethan Carter III and Rockstar Spud vs Willow in a handicap match
Spud mimics the EC3 entrance by doing it with him. He looked pretty awesome doing it. I’m sad the Hogan “Brother Brother Brother” video seems to have vanished. It’s mostly Ethan vs Willow, with Spud occasionally getting involved. Willow overcomes the odds and wins by pinning Spud. Post match Ethan attacks Willow, and Willow gets saved by the one and only Kurt Angle.

They cut to break and come back to Angle stood in the ring. Angle cuts a promo on EC3, and says his career will only end when he says it will. He did win a gold medal with a broken freakin’ neck after all. Angle says that he’s going to have a match with Ethan soon, and he’ll break a lot of bones. Ethan’s bones that is, not his own. That’s unintentional. The match won’t end until Ethan literally dies either. 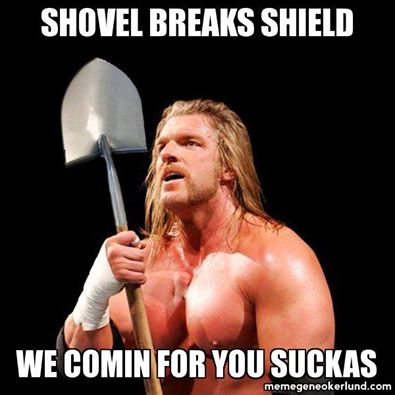 Bobby Roode is backstage and he’s asked about this open challenge table match thing. Bully took away his chance to be a part owner of TNA, and now Roode is going to take tables away from Bully. He’ll put anyone who answers the challenge through a table, and he’ll put Bully through one too.

There’s an awesome video on Seiya Sanada about how he wakes up at 4:30 every day to train, and works harder than everyone to make Muta and Japan proud. This is how you handle Japanese, or any foreign talent, right. They don’t have to cut in ring promos, you can just have them do subtitled video packages.

Back in the ring, Kenny King makes an appearance. He came home, but home has changed. He ridicules MVP’s intelligence and business sense. He’s not going to challenge MVP to another match, he’s just going to commentate a match between Tigre Uno and Seiya Sanada 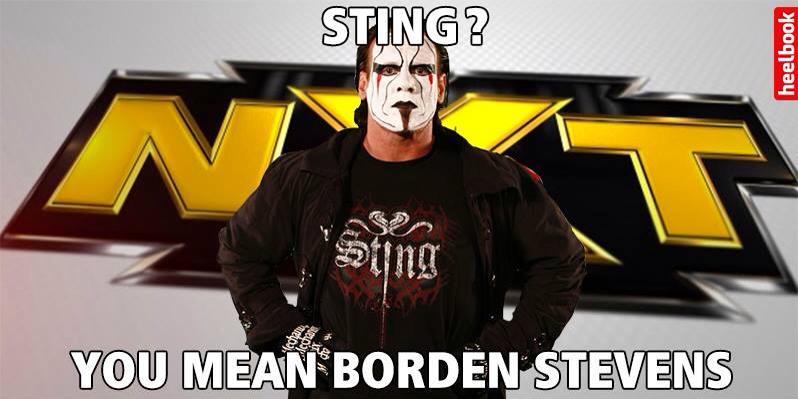 Tigre Uno vs Seiya Sanada, duh.
It’s part two of their best of three series. Sanada won the first round so Tigre has to win this one. After a good match I can’t do justice to, Tigre does pull out the win with a 450 Splash. Kenny was pretty quiet on commentary.

Bully is backstage talking to someone who can’t be seen. He wants whoever it is to put Roode through a table tonight.

Bobby Roode Open Challenge Table match
Pre-match Roode cuts a promo on Bully and asks his opponent to come out. That opponent is…Gunner! They have a good, strong match. Not bad at all. It’s a shame there’s no chance of Gunner winning and beating Roode just a few days before his PPV table match. Roode does the Bully Ray taunt and Gunner hits The Move That Beat John Cena. Kind of. Gunner tries to climb up to the top rope and James Storm appears out of nowhere. Gunner kicks Storm away and Roode drops him on the table. It doesn’t break though, and a “You fucked up” chant starts. Roode picks Gunner up and hits a Roode Bomb to break the table. Post match Roode and Storm start to beat up Gunner and Bully Ray runs out for the save. 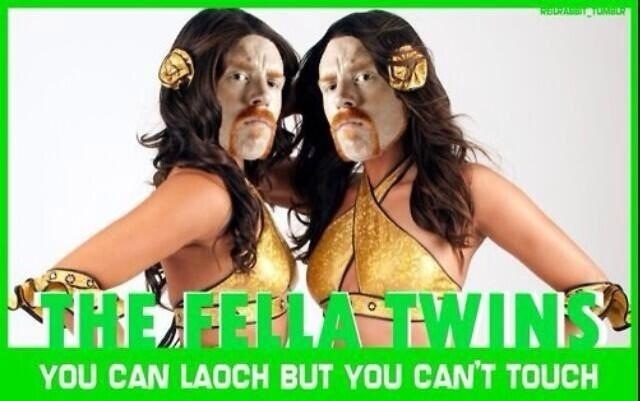 Some video about how the other talent feels about E.Y being the champ. Willow says “Eric Young is the greatest world champion TNA has ever seen”. What a lack of confidence this nutjob has.

Eric Young himself is backstage with a trash can of weapons. He says the best part of it, is that it was his idea. He’s crazy, and he’s going to show everyone how crazy.

Bully is in the parking lot with Gunner. He tells Gunner to pick himself up, dust himself off, and next week they’ll team up to take out Beer Money.

Eric Young vs Abyss in a Monsters Ball match
EY wastes no time grabbing weapons and smashing Abyss with them. He even hits 15 punches in the corner. Always wondered why people only did 10. Abyss uses his size to gain the advantage and beat the tar out of E.Y. E.Y Baseball Slides a trashcan into Abyss’s face, and then Abyss counters a Suicide Dive with said trashcan. EY gets catapulted into a chair in the corner and damn, that looked like it hurt. 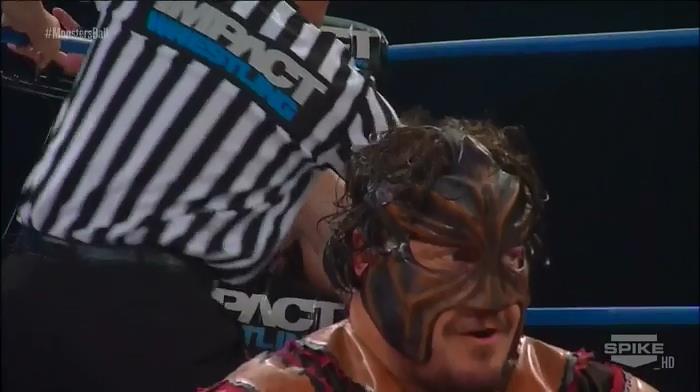 The tacks make their compulsory appearance and EY grates the monster’s balls with a cheese grater. EY goes for a pile driver but couldn’t get Abyss up. Abyss grabs Janice, but she gets stuck in the turnbuckle as EY ducks the blow. EY grabs Janice instead but takes a Chokeslam onto the tacks. Abyss throws a barbed wire board into the ring and goes for another Chokeslam. EY literally bites his way out of it and drop kicks Abyss onto the board. EY hits a top rope elbow for the win.

A good show overall for sure. There was no stupid shit or anything this episode. Barely even anything that didn’t make sense either. 8/10.