If I wrote a proper intro this would take five minutes longer to read.

The show opened with E.Y getting beaten by Abyss backstage. ODB tried to get involved and failed. This went on far too long. They eventually ended up in the arena and my pain continued. It was fun that the fans chanted “Jo-seph” at Abyss. The highlight of the segment. It ends with E.Y getting choked out with a chain on the ropes. That looked pretty sick. His face actually turned purple and he may have died.

EC3 vs Bobby Lashley
There were no ring introductions for this. My guess is Sam Shaw got his hands on Christie Hemme. I missed most of Lashley in the E but went back to watch a few of his matches and enjoyed them, so I’m looking forward to him being on TNA. Lashley controls most of the match, with EC3 getting some hits and holds in to wear him down. Lashley stomps a mudhole on EC3 in the corner and then whips him into the ref. EC3 hits a lowblow while the ref can’t see and tries to walk out but he’s attacked by Willow. The DQ gets called as EC3 gets shredraped by Jeff, who tries to break his leg like he broke Spud’s, but Ethan crawled up the ramp and escaped.

Don’t believe any lies, I made this GIF.

There’s a video of Bully Ray at the TNA headquarters. He’s displeased that Dixie made him wait to see her, when she called him up there.

Backstage at the show Joe walks into MVP’s room and gets in his face over what happened at Lockdown, and over EY getting injured. MVP wants Abyss to be taken out, and for things to be done fairly. He’ll find someone else to chain to Abyss and fix things. Joe tells him every time he tries to fix things, he makes them worse, and walks out. He could just fix it by banning anyone from interferring. That always works.

Angelina Love is putting on her makeup and she’s asked if there’s going to be a Beatufiul People reunion. She says Velvet has had enough time, and they’ll find out tonight.

EC3 busts into Magnus’s dressing room and asks him where he was while he was getting beaten. This segment was beautiful. Ethan says that truly, from the bottom of his heart, Magnus is an ass. Magnus responds by pointing out Ethan was the one who just got assaulted by a clown and asks if the other 12 didn’t get out of the Volkswagen in time. Ethan says their professional relationship is terminated, and Magnus says he terminated it anyway. He got what he wanted out of Aunt D and kicked her to the kerb. Ethan gets in his face for insulting his aunt, and Magnus basically says Abyss is all he needs and tells Ethan to watch the match. 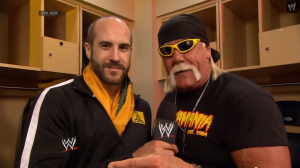 Gunner comes out to cut a promo. He’s proud of his Lockdown win, and several other things. He thanked his dad, who just happened to be sat in the front row. Without their support he wouldn’t be who he is. He says he loves his dad and gives him a hug, and James Storm comes out to join the manly love fest. For what it’s worth, Gunner’s dad was the only one wearing a Gunner shirt. Storm is upset he wasn’t introduced to Gunner’s dad, so he does it himself. He mocks Gunner’s dad for being a crybaby with a dead dad. He actually said that Gunner’s dead dad is glad he’s dead and wasn’t alive to see his son and grandson become such disappointments. Gunner attacks him but eats a Last Call and gets handcuffed to the ring ropes. He even chokes out dear old dad in front of him. James Storm is, without a doubt, a huge fucking cunt. Gunner’s Dad tries to get Gunner out of the handcuffs and Storm whacks him on the back of the head with a beer bottle. I can only get so uncomfortable. 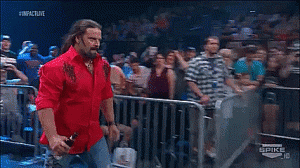 I also made this GIF. Thanks TNA!

Bromans are backstage but I don’t really care. They find Sanada and Tigre and basically racist all over them. Mucho Racismo grande.

Lei’D Tapa vs Gail Kim
We finally get the second match of the night, and Hemme is back and does actual introductions. Tapa slowly but surely dominates the match until Kim hits her with the Eat Defeat for the win.

MVP is up in the rafters with Willow. He asks Willow to take out the last guy left and help get rid of Magnus. Willow should not be allowed to talk. Ever. EVER. NEVER FUCKING TALK YOU DAMN HIPPIE. He basically says he doesn’t play politics and will strike when and where he wants. Just as I was enjoying this shit. He basically talks how he did in the promo videos but without the distortions.

Angelina Love comes out to the ring and calls out Velvet for her answer. Get these girls different music already. Velvet mentions the good and bad they had together, and Love says she’s only seen as the leader of The Beautiful People because she was the veteran. Velvet did a lot on her own, but one is the loneliest number in wrestling. Velvet has trust issues thanks to Sabin, but accepts Love’s offer. The Beautiful People are back and Tazz calls their B.F.F gimmick a shoot. Love calls out BP3 Madison Rayne. Love asks her to join the Beautiful People, but does it in a pathetic and demeaning manner. Rayne says she’s paid her dues and she’s not interested in getting back together with them because they treated her like shit before. 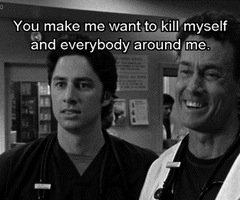 How this segment made me feel.

Magnus is backstage and he’s asked if he has any concerns. He doesn’t. Joe walks in on the interview and threatens to kill Magnus. He’s walked off by what I think was Al Snow.

The Wolves vs Nippico (Tigre and Sanada) vs Bromans for the Tag Titles
Bromans racist it up again and tell Tigre to lay down. Tigre says no and attacks Bromans. Bromans try to walk out and that’s when the Wolves come in and make sure they get back in the ring. The two face teams work together at the start and then realise it’s every man for themselves. Nippico and Wolves are the focus and they do a great job. Frankly if they don’t even trust Bromans in the ring they shouldn’t be the champs. Robbie E tags himself in and basically gets assraped. Bromans get into it after Tigre tags himself in and Sanada and Jessie get hot tags. Sanada is great to watch. Zema poses with the X-Division title outside the ring and Sanada tags Tigre in so he can jump on Zema. Tigre high flies until the Wolves hit a double team Back Breaker Powerbomb. Anyone who wants to see how to be a tag team should just watch those guys. Unfortunately Bromans win with their Bro-down thing. They actually aren’t a bad team I just despise their gimmicks and they have X-Pac heat for me.

Angelina Love is crying backstage because Rayne doesn’t like her anymore. Velvet encourages her to talk to Rayne in private.

There was another Kenny King video and I’m low on jokes about how I don’t know who he is. 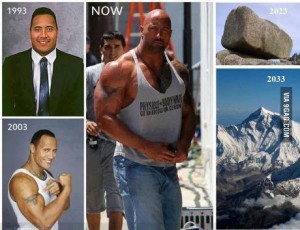 The evolution of The Rock. Also #PEDS

Angelina meets Madison backstage and wants to make up, but Rayne still doesn’t care. Angelina says she isn’t who she used to be, but she proved she was exactly the same earlier. Rayne agrees to think about it and Angelina attacks and beats the ovaries out of her when she tries to walk off. She shouts in Madison’s face that she doesn’t even want her in the Beautiful People anyway. The Beautiful People are her and Velvet. I guess we got ourselves another Sam Shaw, but this time it’ll be accepted because LESBIANS. 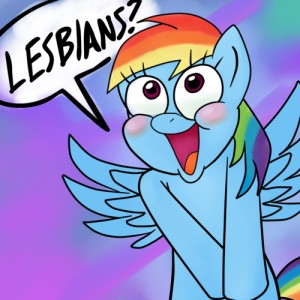 MVP walks into Joe and says he’ll be the one chained to Abyss. He’s going to lead by example and take care of Joe personally.

There’s a video package on Knux. Yep. That guy’s coming back. He’s off to meet a woman who he’s not heard from for a few years. Knux is literally a carnie. Or his family is anyway. It ends before anything conclusive can happen.

Bully is still at TNA HQ. He decides he’s waited long enough and walks into her office. He cuts a promo about how much everyone hates Dixie to a chair that’s turned around, totally giving away the ending. What Bully said was good, but I wasn’t into it because I knew Dixie probably wasn’t in the chair. He turned on Dixie because she tried to control him, and no one respects her. He turns the chair around and of course it’s empty. He’s jumped from behind and demolished by Bobby Roode. Bobby Roode was the one who invited Bully, not Dixie, and he’s doing it entirely for himself.

Magnus vs Samoa Joe
Magnus does some heeling and lures Joe into some cheap shots as Abyss and MVP play Tug O War outside the ring. Joe hits hard and fast, as he always does, and Magnus hits back, as he always does. MVP and Abyss do pretty much nothing and just watch most of the match. Magnus tries to focus on Joe’s somehow-still-injured ribs and Joe sells not being able to follow up on some of his big moves. Magnus fights out of the Rear Naked Choke and the ref is taken out inadvertantly. That’s when Abyss and MVP finally move. They drag eachother around a little and MVP takes Abyss’s tacks away from him. MVP unlocks the chain and throws the tacks away, and gets his back broken with chair shots by Abyss. Joe goes to dive out the ring for the save and Abyss throws the chair at him. Magnus hits the top rope elbow drop for the win. 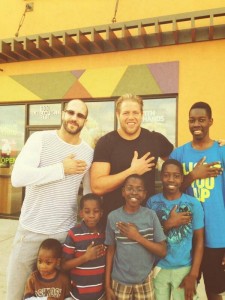 The Real Americans outside a Taco Bell with black kids..Zeb must be so mad.

It wasn’t that bad a show. I was just very unemotional about it. I was tired and hungry. The only thing I really responded to was Gunner’s dad. No rating this week.