RAW and Summerslam were good. That means that Impact will probably be shit. I’m watching it live on Wednesday and I hope other people were too.

Bram vs Magnus in a Stairway to Janice Match
I was tempted to just turn Impact off and wait until tomorrow so I could skip this match. No interest. None. My predictions are coming true. Bram bleeds pretty early, which causes the fans to chant for fire. That’ll get even me interested. Both guys are sent through barbed wire boards and bleed all over the place. Bram grabs Janice, but Abyss counters and slams him into the tacks. Abyss gets Janice, rendering teh stipulation useless. Or not as Bram gets her again, and uses her to get the win.

Backstage Ethan Carter is asked how jail was. He says his mind is clear now and will kill those who killed Dixie.

Bram is backstage celebrating. Magnus asks if he’s going to outshine him now, because no one does. He’s going to be world champ again soon. 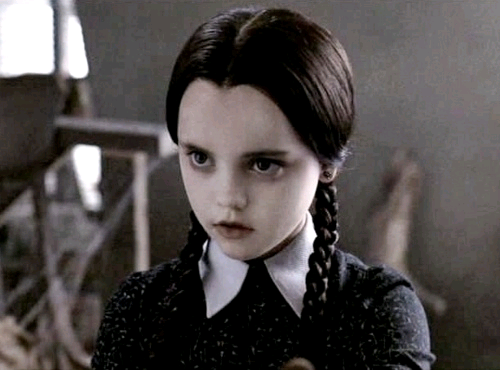 Ethan Carter and his stooges come out to the ring. Ethan is pretty pissed about Dixie going through a table. He demanded Bully be fired last week (it’s okay Ethan he’s gone now) but Angle said no. EC3 thanks Angle for having him arrested because he was able to think clearly in jail. Bully was to blame, but so was Rhino. He blames Rhino for what happened, and gets in Rhino’s face. Rhino grabs the mic and says he’ll be a dead man if he doesn’t shut up, and to shove his money up his ass. Ethan snaps, slaps Rhino in the face, and the brawl is on. Ethan even throws Spud away and beats the ever loving crap out of Rhino. Spud’s scared facials helped make this segment.

Samoa Joe is asked about the history he and Low Ki have. Joe says they have a legacy, not history. Low Ki is too self confident, and that’s going to be his weakness. Mr Anderson participates in a PSA about smoking because now Impact is sponsored by that The Real Cost thing. Don’t smoke kids. But feel free to try wrasslin at home. That never goes wrong. The Hardy Boyz are asked what’s left for them to prove. Matt says they need to prove they’re STILL the best team. Jeff implies they’re going for the belt and Matt pumps up the tag division, made up of exactly three teams (that he named). They’re going for the top basically. A pretty sweet video on Samoa Joe also aired.

Low Ki vs Samoa Joe for the X-Division Championship
This match took a long while to get started. Joe damn near killed Low Ki. It was Lesnar vs Cena all over again. This was almost the exact opposite of what I think an X-Division match is. It’s nice Joe is champion, but he’s hardly high speed. I understand he used to be, but that was a while ago. Joe transfers a Powerbomb pin into a Boston Crab into an STF. That got me into the match. Joe hits the Muscle Buster for the win. Not a bad match at all, just not very X-Division-y.

The Hardyz are backstage. They meet up with Team 3D and the door closes. JB is with Anderson. Anderson still hates Sam Shaw and still refuses to accept he might have changed. He asks if Gunner is an idiot, and Saw comes in and tells Anderson to apologise. They have a brawl and Tenay says the match has started as they cut to break. Coming back from break the match is indeed on.

Mr Anderson vs Sam Shaw in an I Quit match
The pair brawl at the top of the ramp complete with cables and chairs. Cables, Ladders and Chairs? I want royalties TNA. Gunner comes out to watch and I spy a Morphunky shirt! Sam Shaw pounds Anderson in the ring and locks on a Camel Clutch. No back breaking or humble making tonight though. Anderson locks on an ARMBAR! The fans chant for Shaw to quit and he does, but Anderson doesn’t let go. Gunner seperates them and gets in Anderson’s face. 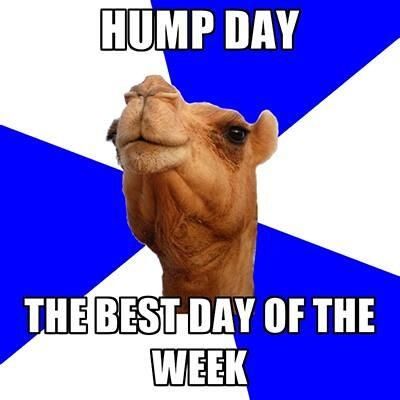 It certainly is with Impact around!

The Hardy Boyz leave the 3-D room. 3-D follow them out and say they’ll let the world know soon what the Hardyz came up with. It’s going to be good, supposedly. There’s one team missing and they’re going to go see if they’re in right now. After the break.

A video airs of something that happened after the Knockouts match from last week. Angelina Love jumped Gail Kim and they had a serious fight that was broken up by the agents. Kurt Angle is asked about it and says it disgusts him. He feels Love doesn’t deserve a title shot, but Gail asked him for a Last Knockout Standing match with Love for the title. That’s later. For now there’s an “earlier today” video where Bobby Roode says to be the best you have to be the champ. He was the most dominant champ, and being sent home for seven weeks made him sick. Tonight he’s going to leave the six sides of steel as the number one contender.

The Hardys (no z’s and they’re no longer boys) come out to the ring. Jeff says the name Hardy is synonymous with tag wrestling. They’ve had good matches, but they can do better. They have an idea but I don’t know what it is because my feed cut out. It comes back with Team 3-D coming out to the ring. Bully says they’ve created history together and the fans call for one more match. Bully says he knows the Hardys want to be the champs, and Bully says he wants Team 3-D to go into the HOF as the tag champs. Bully calls out The Wolves. Think about this; one of the people in this segment is currently out with a broken leg, and another is no longer with the company. Taping in advance yo. Eddie says the Wolves want to be in a conversation about the best tag teams, and Davey says they can have a title match whenever they want. That’s it. Nothing on stips or anything. Instead we get Dixie Carter.

Dixie is in her bed, so at least she’s selling her injury. She’s asked for her thoughts, and says she knew straight away she was seriously injured. They use CSI style CGI to show where her back is broken, and apparently the part of her back that’s broken is pretty hard to break and typically only breaks in car accidents. They replay the table spot about five million times as Dixie says she saw it back once, and never again. She went to war with Bully, and she lost. She’s going to take time to herself, and focus on business outside the ring. She says you haven’t seen the end of Dixie or Ethan Carter, and Carter’s never forget. Tenay asks what that means, and Dixie tells her the interview is over, kicks them out, and calls for Serge to fluff her pillow.

Christy Hemme is pregnant. Sam Shaw must be either delighted or devestated. I’m devestated as they replay that weirdly sexual James Storm/Sanada video from last week.

Angelina Love vs Gail Kim in a Last Knockout Standing match
Kim wastes no time in going after Love. Love misses with a cookie sheet and gets her ass kicked. Speaking of asses, Velvet Sky whacks Gail in hers when she’s on the top rope. Tazz jokes in the event of a double countout Velvet would win as she’d be the last knockout standing, and one fan has to chant “you screwed Bret!” at Hebner. Let it go people. Speaking of letting go, Kim let Angelina go when she whipped her into the barricade. Gail grabs a chair but Love Botox Injections it right into her face. Damn fine match. Gail hits an impressive as Hell backdrop variation from the top rope onto a chair and Love doesn’t get up before the ten count. “Better than divas!” indeed, New York crowd.

Kurt Angle announces the three way tag match for the titles will be a series. Whoever wins picks the stipulation of the next match and whichever team is the first to get two wins wins the titles. Got it? Good. Because it’s MVP time. He comes out with the crew and says that it was unfortunate he was injured and couldn’t go for the title, but instead Lashley stepped up and won. MVP mocks the people Lashley has killed so far. The next match determines the new number one contender, but neither he nor Lashley is worried. Whoever wins has already lost because they can never beat Lashley. He calls for the fans to bow down to Lashley. They boo. He leaves. 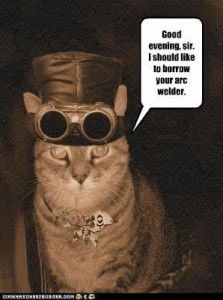 You should also lend arc welders to cats.

Austin Aries vs Eric Young vs Gunner vs Magnus vs James Storm vs Bobby Roode in a Six Sides of Steel match
It’s an all out brawl with the cage mostly coming out on top really. They pair up, beat up, and beat down eachother. People go up the cage but they don’t get out. I also don’t get out of commercials. It felt like there were about two minutes between commercial breaks. Get your shit together America. Three submissions get put on in the ring. Aries jumps out of the Last Chancery and tries to escape but fails. There was a near synchroised double triple-powerbomb (best way to describe that). EY and Roode race to the top and drop down at the same time. Both men are pronounced winners by different refs, and they show side by side replays that confirm a double victory. The show ends with them arguing over who really won. Pretty good show. My prediction ended up being wrong.