I just had a blood test and wish I was woozier, to have an excuse to do a bad job. Lousy ethics.

The show starts with a video package on the T.N.Ation of Domination. They run into Kaz backstage and kick the shit out of him. He called them “homie”. They finish making their way to the ring, and MVP offers to teach some history. He’s awesome, and he’s so awesome he could bring his homies in and take power. Power is always taken. A wrestler needs to be a politician too and he’s the best there is. The crowd calls him a sellout and he pulls a Bo saying “I AM a sellout. I’ve sold out arenas all over the world!” He lets Kenny King speak, and King says MVP is a genius. He says that the match against MVP was just to throw everyone off. MVP hands over to Bobby Lashley who says that playing the politician never works…but he joined MVP in politicking. Welp. That’s that. MVP calls himself a God and gets interrupted by The Wolves.

It’s not often I get to say something is for Joe. This is supposed to be animated.

The Wolves say it’s funny he wants respect because he lost theirs, and they ask him where the MVP went who didn’t care about money. MVP says the wrong name and says he gave them money and power. They have heart and to be where MVP is, you have to be heartless. MVP offers to send them back to the indies, and says that’s where they belong anyway. A 3 on 2 brawl breaks out. The Wolves get destroyed and Davey is carried up the ramp by Bobby. MVP picks him up and Lashley spears him off teh stage through a table.

Dixie arrives back at the Impact Zone with EC3, and they show Davie getting sent to hospital. They let Eddie ride in back with him. That was nice of them.

Eric Young goes out to the ring and grabs a mic. Wrestling matters so much we aren’t having any yet. EY calls MVP out on the 3 on 2 assault, and MVP comes out to hear what he had to say. EY tells him to shut up and listen, so MVP brings out the T.N.Ation of Domination again. The same faction in two segments in a row? Dammit. EY calls Kenny King a scumbag for being a male stripper, and says he’s highly disappointed in Bobby Lashley. He asks Lashley what he’s going to say to his son when his son asks him why he’s being called a sellout. MVP says that when his son does ask him that, he’ll be in a fancy car. MVP says again that you have to take power, and they aren’t selling out. They’re motivated by money, power, and respect. EY says the fans motivate him, and jumps Lashley. The Race War continues. Austin Aries runs out for the save. He does a pretty good job and together him and EY empty the ring. Aries says he always saw MVP for who he is, which is a valid point. Aries challenges MVP to a match and MVP accepts. 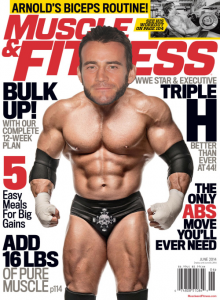 The internet responds to Trips on Muscle and Fitness

Bram and Magnus are backstage. Bram got Magnus a match against Willow. It’s Falls Count Anywhere. Magnus says he’s sick of Bram and punches him out. Bram laughs and says that’s what he wants out of Magnus, for him to beat people up.

Mangelina Love is backstage and she has an announcement. She’s issuing an open challenge, an Gail comes in and beats the crap out of her. She’s dragged off by security.

Mangelina comes out to the ring. She confirms there’s an open challenge, but the challenge isn’t open to former champions. That’s actually pretty cool. I think Brittany is the only one who qualifies. She’s who comes out at least.

Brittany vs Mangelina Love for the K.O title
It only took a third of the show for some wrestling. It’s a pretty cool and competitive match at least. Brittany holds her own pretty well and even gets the visionary pin as Velvet distracts “Stiff”ler. Age overcomes beauty as Mangelina wins via Botox Injection. That’s what she calls her Superkick. Post match they put a bag on Brittany’s head, Gail runs out because a third run out is best for business, and chases off the “Beatufiul” “People”. 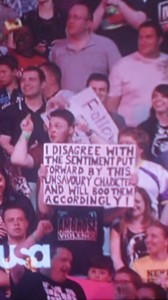 You know you’re in England when…

Dixie finds out she’s been banned from the building as someone out in the ring says something about the Knockouts championship. Terrible.

James Storm is in a bar with Mr Anderson. Anderson buys him a beer and challenges him to a game of pool. Storm says he’ll hit him with the pool stick. It’s a cue you damn redneck. Kenny offers more games, and Storm makes them violent. They settle on a drinking contest and Anderson calls for the Bartendress to line them up.

Austin Aries vs MVP
Aries jumps MVP as he talks with the crowd. If this match ends in a run in I give up. It’s a pretty good match. I’ve missed Aries in the ring. He goes for the 450 and……there’s a run in. The Nation run in, and so does Eric Young. Seriously. Fuck this company. See you next week. I wish I could actually turn this off. I would if I wasn’t reviewing it. MVP grabs a mic and says that EY’s opponent for tonight is Bobby Lashley. There’s another run in! It’s Dixie Carter! God damn it.

They cut to break and when they come back, Dixie is chatting with MVP. His actions mean that she HAD to come back and she’s surrounded by three buff black dudes. Remember folks, YOU made it racist. Dixie teases a face turn, but says it’s not about what she wants, but what she can do for MVP. Then guess what happened? That’s right. A RUN IN. Bully Ray ran out swinging his pipe and chased Dixie out of the ring. MVP asks Bully why he’s here. Bully calls MVP a piece of crap and says he turned his back on everyone. Bully hypes up Eric Young and MVP asks him when he got a conscience. Bully is jumped by King and the race war continues. Dixie comes back out to watch. She gets off on suffering. The Nation leave Bully in the ring and Dixie calls for Ethan to get a table. Ethan sets the table up  and sends Bully through it. Dixie says she fears no one to end the segment.

Dixie and Ethan are walking backstage when Bully shambles his way towards them. They make a run for their limo and escape. 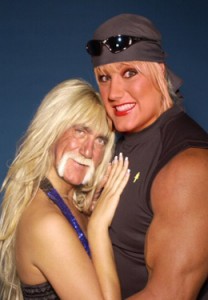 I see nothing wrong with this completely unphotoshopped picture.

Magnus vs Willow (Falls Count Anywhere)
Now, as a Falls Count Anywhere, this match can’t end in a run in. I’ll still count it if Bram is involved in the finish. The match almost immediately goes out the ring. Bram offers Magnus a weapon but he still refuses it. Nice to see he’s still being booked as an absolute pussy. Bram offers him the weapon again and a fan shouts “FINISH HIM!”. Magnus goes for the fatality but pussies out again. Bram wants him to hit Willow in the head but he just goes for the stomach. Willow hits the Twist of Fate for the win. Bram is displeased. A match ended without a run in. How ’bout that?

Gunner is still in the Asylum with Sam Shaw. Gunner says he’s been there twice but Sam still won’t talk to him. So Sam talks to him. Sam says Gunner doesn’t know what it’s like, but he does. Apparently Gunner has spent plenty of time in an Asylum. It just feels like it when you work for TNA.

Eddie Edwards is shown walking back into the arena. He abandoned his friend in the hospital. Douche.

Back in the Asylum Gunner tells Sam about a friend who went to war with him. He was traumatised, but Gunner was still there for him. Gunner HAS been to an insane asylum, but not been personally committed. Eventually his friend got better, and Gunner believes Sam can do the same thing. Sam doesn’t trust Gunner, so Gunner offers to try and get the jacket taken off. 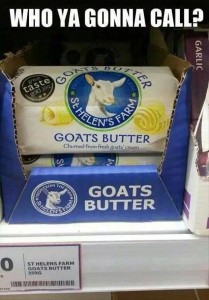 Who ya gonna call?

Eddie Edwards gets in the ring and dares any member of the Nation to fight him. King comes out and gets his ass kicked. Edwards chokes him out with his shirt. That’s a man who gives no damn. This. This I enjoyed. King fights back and takes Edwards out with mic shots to the head. Edwards chokes him King out with his wrist tape. The more creative he gets the more I enjoy this. Edwards gets sent into the steel steps twice and suplexed on to the ramp. Yeah that’ll do it. King tells him to say hi to Davey, and then tells Davey, through the camera, that Edwards will get a bed next to him. A great end to a great brawl.

Anderson and Storm are still drinking. Storm is winning. I hope this ends with them ending up in bed together.

MVP has a word with Bryan Hebner. He apologises for what Kenny did to him, and makes it up to him by letting him ref the main event. MVP tells him to cheat and let him win. 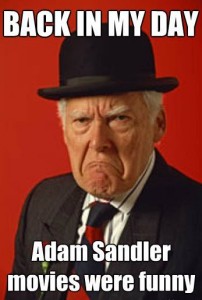 Back in the bar Kenny taps out. Storm tells him he’s a lousy drunk, and Anderson says he’s a good actor. The beers he’s been drinking have been fake, and Storm is the only one that’s drunk. No drunken sex for me then. Instead Anderson just beats the shit out of him.

EY has a pre-match interview. He says he’s not really in a condition to fight, but he learns from his mistakes and Lashley will too. The mistake is that he left Eric alive. EY is just crazy enough. That made sense.

Eric Young vs Bobby Lashley
Eric Young is introduced first and Tenay calls attention to how the champ is always announced second, saying it’s a tactic by MVP. Lashley controls most of the match and EY doesn’t get much offense in. EY finally gets some offense in and even hits a Pile Driver. He goes up for the elbow and…there’s a run in. Nation of Denomination come out and send EY off the top rope. The ref just lets it happen and counts the pinfall after Lashley hits the Running Powerslam. Post match EY gets beaten up a little more as TNA couldn’t resist just one more run in. Aries runs out for the save, and gets wasted. Aries takes whatever Kenny King’s finisher is called to send the show off the air.

Almost every single segment and match ended with a run in. I never want to see one again. It wasn’t a turrible show, but it was far from great.