Another week, another Impact.

Gunner runs around backstage looking for Storm and he’ll have no chance in hell.

MVP starts the show properly as Tenay informs us Dixie isn’t here. I don’t think Impact has ever made me so happy. Bobby Roode, Rockstar Supd, and EC3 are the bookers tonight. MVP runs down the Lockdown main event, and says that he’ll give Gunner a rematch, due to interference last week. He introduces Joe and Magnus and we have us a contract signing. Magnus is still getting booed, did he hump a mannequin of the queen in the ring or something? 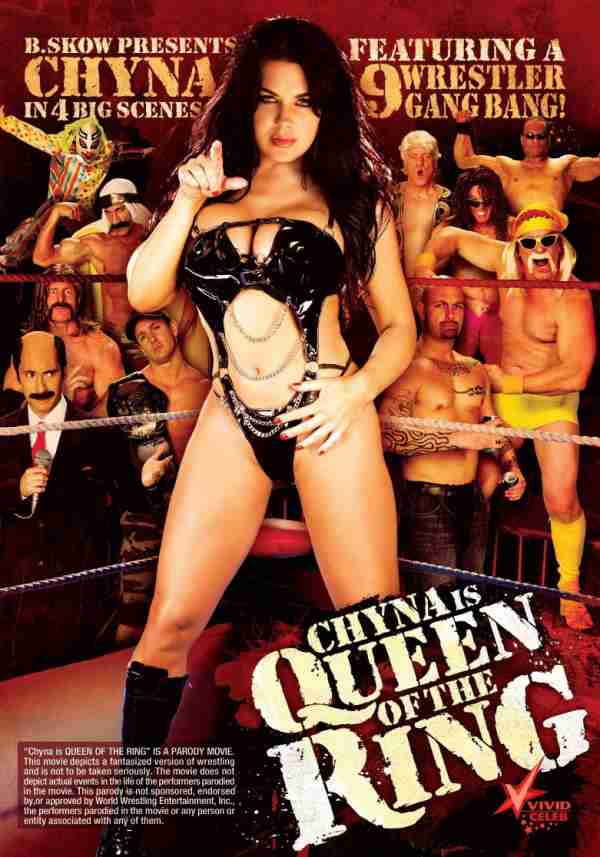 Queen IN the ring, not Queen OF The Ring.

Magnus heels on London and the crowd, since he left it’s gone straight to hell. I’ve been to London, I can confirm that. MVP makes the Lockdown match “Joe Rules”, which means the match can only be won by pinfall, submission, or knockout. Madison Rayne for new TNA World Heavyweight Champion. Magnus calls Joe an unrefined animal and starts a “Joe’s gonna kill you” chant, and says he’ll put Joe down, and Joe will never be champion. Magnus gets in Joe’s face and gets his ass kicked for it.

They recap The Wolves winning the titles at a live event, and then the Bromans are backstage wanting their titles back. So, they flew to a live event, and then back to London. Still it’s kinda cool they tied their taped shows to their present day events. Bromans find Roode so they can be on his team for Lockdown. He says they lost to a team that beat Bad Influence. He makes a triple threat tag match between Bromans, Bad Influence, and the Wolves. Whoever wins is on his team, and if Wolves win, no one is. 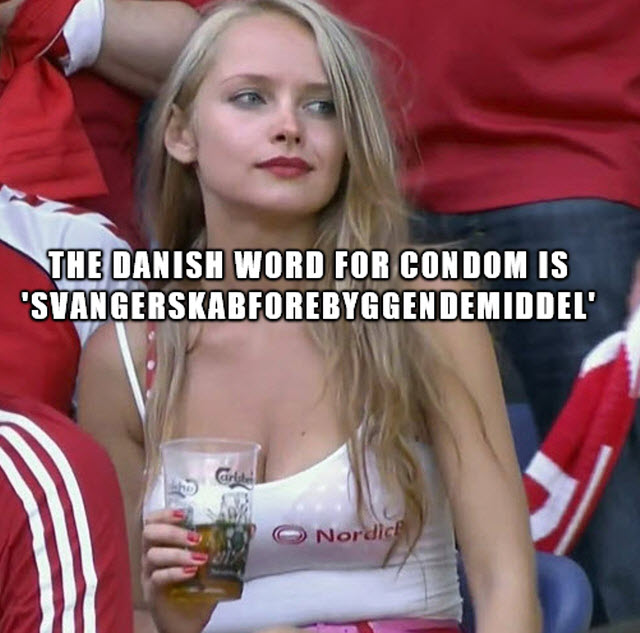 The Wolves vs Bad Influence vs Bromans
It’s mostly Wolves vs Bad Influence, the two teams the fans aactually like. The Wolves come out on top for most of that too, with the odd cheap shot. Daniels teases tagging in Bromans to taunt them too. Edwards/Richards hits a pretty awesome looking move from the corner and the Bromans break up the pin. Richards climbs to the top and Robbie steals a tag as he jumps off and picks up the win. Bromans are going to Lockdown. I bet James Storm and Gunner are also on a team.

Hobo Carter III is backstage. He’s picked his own opponent; the best wrestler in England. He also has some truths for Angle or something, and says that he’s the new face of American Wrasslin, and holds up a ‘MURRICAN flag. 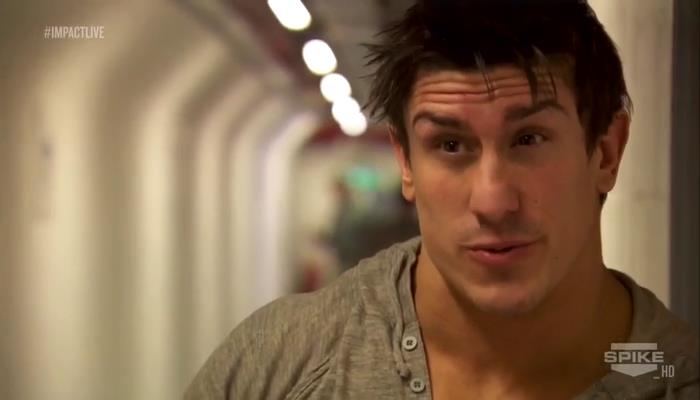 HC3 vs Doug Williams
It’s been a while since we’ve seen Doug. Kinda wish he was back for more than a squash match. That’s all this is, Hobo wins. He gets paid with a sandwich. Doug got some offense in at least. Oh and before the match HC3 heeled on the crowd, saying the US would win the SOOOCCEEERRRR world cup. Post match he cripples Doug.

James Storm walks out to the ring and gets a mic. He looks like The American Badass. Gunner comes out too, bitch tits and all. Storm always planned to cost Gunner the title. Being given the tag title case was what set him over the edge. Gunner was nothing without Storm, and never thanked him. Gunner says that he fought for Storm’s right to party and drink beer. Gunner chose his path, and Storm hits him with the truth. Gunner chose to become a robot, and no one would give a damn if he lived or died. Gunner says his family care, his friends care, and, for some reason, the British crowd cares. Frankly, no sir, I don’t. Storm says no one owes Gunner a thing and gets a fist in his face. Storm cowers in the audience like the bitch he is.

Gunner is shown backstage, waiting by the arena exit, threatening to just kill Storm when he tries to leave.

Magnus is in the ring with A-Train. Seriously, it was A-Train. It was actually that German from last week. He’s Magnus’s solution for Joe.

Samoa Joe vs Bad Bones
Must. Resist. German. Jokes. The Kraut gets tenderised and turned into bratwurst. I did Na- no. I won’t make that joke. 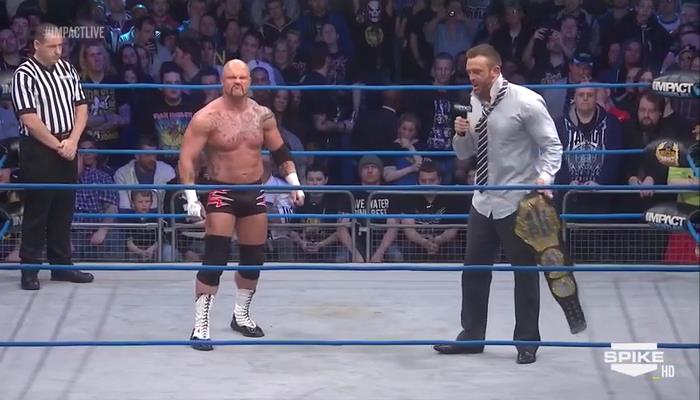 Aries is with MVP, who’s in his ring gear. MVP asks Aries for his decision, and Aries is undecided still. MVP says Roode will tell Aries anything he wants to hear, and Aries says MVP will do the same, so MVP asks him for his demands. Aries wants proof that MVP has drive and determination. He wants to ref the match between Roode and MVP that I forgot was happening. MVP questions Aries’ impartiality and Aries says if MVP wants him to be on his team, he has to trust him. MVP opts to trust him. Cos trusting people in wrasslin always works out.

Kurt Angle vs the TNA Hall of Fame
Jeremy Borasch is in the ring with Angle’s fancy new watch. He introduces Angle, and takes five years to do it. They show a Kurt Angle Hall of Fame induction video. Pretty sweet job too. Except for Angle posing in the rain, which was just far too hokey. Angle manages to gingerly walk down to the ring, and Borasch hands the watch over. I think a ring would be cheaper than a Rolex. Angle and Borasch hug it out and Borasch leaves him alone in the ring to accept the “Thank you Angle” chants. Angle says that the TNA HoF isn’t about Kurt Angle, or TNA, but the fans. Without them, it wouldn’t exist. Some fan shouts he loves Angle, and Angle reciprocates. He tries to be serious about his issues but can’t stop marking out for the fans who keep chanting his name. Fucking mark. He had to change his life, and he’s done that. He got clean and had some great matches. He thanks his God, his wife, kids, the talent, and the fans. He says it’s a great night to be Kurt Angle and is about to leave when HC3 comes out. He has a tribute video of his own for Angle. 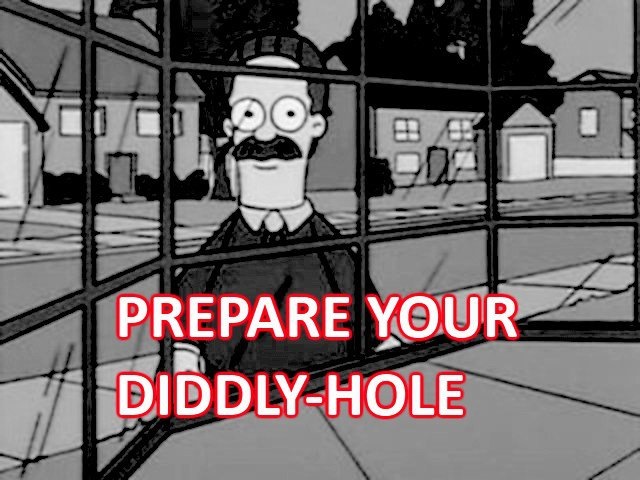 It’s a comical thing showing Hobo beating the shit out of Angle with thought bubbles appearing for Hobo that have crap in them. Hobo says that Angle isn’t telling everyone the big news and Angle invites him into the ring to do it. Hobo pulls out a piece of paper with “I beat Sting (and Kurt Angle too)” written on it. Clever. Carter says that Angle is seriously injured and needs surgery, and may never perform again. He tells Angle that he should retire. Kurt threatens Carter, and says he should have gone straight to the source. Carter says the internet is always right, fifty percent of the time. Angle says his MCL isn’t torn, and neither is his ACL. There’s disturbing sexual tension before Angle punches El Hobo Carteria out of the ring. Angle says that MVP gave Angle a steel cage match at Lockdown against Mein Hobo.

Beauties (Rayne and Velvet Sky) vs the Beasts (Lei’d Tapa and Alpha Female)
Wonder if they’ll bring the Knockout Tag Titles back. Probably not, they only have four knockouts. Typical David vs Goliath style match with the occasional bit of interference from outside. Tapa wins due to said interference. Post match the heels attack the faces and ODB runs out for the save.

Random ass viedo package for that Tiger guy they hired. Tiger Uno is coming to Lockdown. I think this guy has about four names now.

Samuel Shaw time! He’s asked if he thinks last week was a mistake, and he says no one understands his love. But they will. 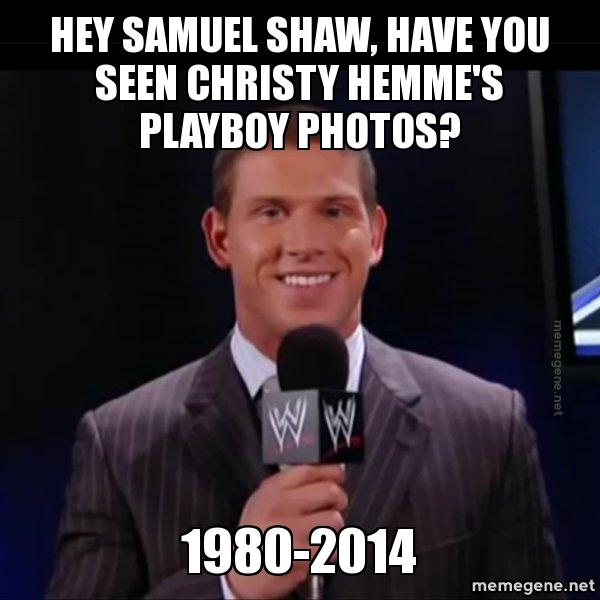 Samuel Shaw walks down to the ring and Christie Hemme is visibly uncomfortable. Samuel quotes some likely dead guy. To be great is to be misunderstood, and Hemme has misunderstood him. He wants her to enter the ring, and says he’ll respect her space. Shaw enjoyed their time together, and feels Hemme did too. There are people who lust after her, and he wants to protect her. He wants everything from her, not just one thing. Anderson’s music hits and Anderson looks in rough shape. There’s a nasty cut under his eye. Shaw says that Anderson is one of the guys lusting after Hemme and she’s lucky he was there. Yeah, the married guy who just had twins. Anderson calls Shaw a creepy bastard and tells him his relationship isn’t real. The ass whooping he’s going to give Shaw is. Shaw denies his creepiness, and basically says he didn’t rape her. Even if he did try to screw her, she wouldn’t say no, because she’s a slut. Hemme slaps him for that comment. Shaw throws Hemme at Anderson and tries to choke him out. And succeeds.

There’s a Willow promo and for Gee, I will do my best to transcribe; “There’s no rhyme or reason to my madness. No *misheard* slurs in my speech. Just the *misheard* enigmatic destiny that fills my being with their cold posion.” You know what, fuck it. He’s going to incur the wrath of challengers who will do nothing. Some other shit. I don’t care. 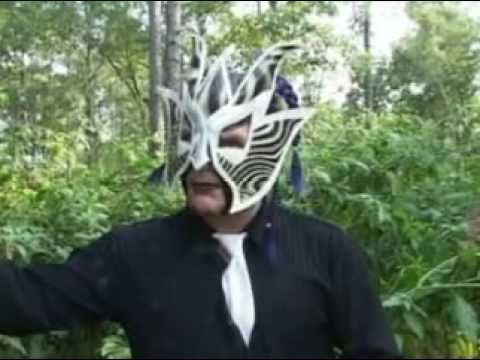 Storm and Gunner have a good old fashioned backstage brawl. Wasn’t that bad actually. Security runs interference and holds them apart. Gunner tells Storm he’s done at Lockdown, and Storm says that sooner or later, God will cut Gunner down. I guess that they won’t be the missing two members in the Lockdown teams. I just remembered Hardy is going to be on MVP’s team. Well done on leaking that MVP!

Eric Young is backstage and he’s asked about Abyss. EY doesn’t know where he is, and hopes it’s Park that comes back, not Abyss.

MVP vs Bobby Roode with Aries as the ref
Aries comes out looking like a gay porn star. I’ve never seen someone look so bad in a ref shirt. Never do this again. Please. Aries calls a pretty decent match down the middle. There’s a whole lot of tie ups and not much striking for a while. There’s an odd big move to keep the crowd into it. It’s barely enough to keep me in it. The pace finally picks up as MVP gets on a roll and hits his Ballin’ Elbow Drop, and Roode kicks out of a bridging Suplex. Roode gets in Aries’ face after a near fall and MVP gets the Play Maker in for another near fall. The finish comes when Aries hits a spinning Discus elbow on MVP and Roode hits the Roode Bomb. Aries is the last member of Roode’s team, and Hardy is the last member of MVP’s. The show goes off the air with Aries and Roode celebrating. 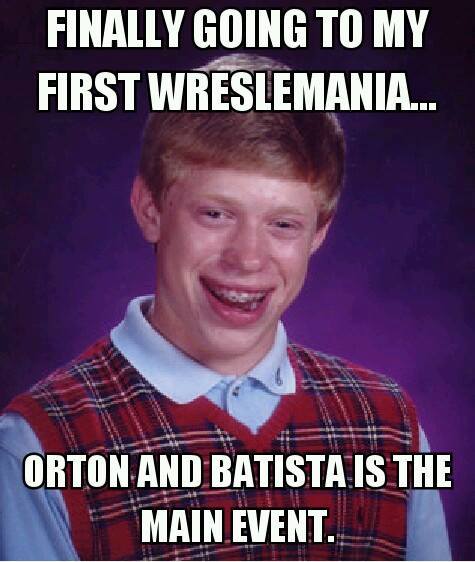