There wasn’t a review last week because I was on holiday and I was lucky to watch the show at all. Here’s the review for this week, which I constantly put off doing because oh God I’ve not been enjoying Impact.

MVP and his crew come out to start the show. MVP says that Lashley will soon be champ of Bellator too and no one on the planet is tougher than Lashley. That’s all he gets to say before Samoa Joe comes out. He says that while Lashley is pretty dominant, he’s not the toughest. He’s not even the toughest in the ring. He challenges Lashley to a match, King says racist things, and all three men jump Joe and kill him. Security runs out to save everyone and the crew walk off while Joe is held back. On his way out, Lashley accepts the match for tonight.

Havok has arrived. Not literally right now. Right now we have a video package on the Knockouts match.

Taryn Terrell vs Gail Kim for the KO title
A Havok video played before this match. I wonder how this is going to end. Maybe I’ll be surprised. Tazz is grating on commentary again but Taryn has learned to run the ropes at least. It’s a good match with some hard hitting moves including a neckbreaker on the steel steps and Gail Spear-ing her way through the ropes and onto the floor. They trade finishers and near falls, and Gail reverses a cross body into a pin for the win. No Havok involvement? Colour me surprised. Oh there she is. They hug, new music hits, and out comes Havok. She takes off her LED Bane mask and lays waste to Gail and Taryn.

Eric Young runs into MVP backstage. MVP reminds EY how Roode used to treat him like crap and tells him to remember history.

The Bromans have a date with a TNA knockout or something. DJZ asks who they got matched with but they argue and won’t tell him. Whoever it was texts Jessie Godderz and Robbie struggles to get a better signal so he can get her nonexistant text. Please TNA, stick to one stupid thing at a time.

They followed this up with something that’s never stupid. Giving EC3 a live mic. He says he hates everyone, and that Dixie is a charitable saint. The Carter Charity is over now. Rhino was the first victim and he’s going to get several more beatings. The violence will continue until his demands are met. Demand one; the termination of Bully Ray. 2; people in TNA aren’t allowed to say “Hardcore” and “Extreme” because he’s sick of living in the past. Demand 3 is respect. He’s tired of hearing “You can’t wrestle” chants, and chants back the fans aren’t creative and he’s the best wrestler too. The fans respond by chanting CM Punk and Carter says he wants to beat him too. Punk confirmed for TNA. Ethan says his line about the world needing the Carters, and he gets jumped by Rhino. Spud pulls him to safety and Rhino challenges him to a match. Ethan accepts a match, but throws Spud at Rhino instead. SWERVE!

Remember that time Randy Orton got punched in the dick? Now you do.

Gunner and Sam Shaw meet up backstage. Shaw says sorry and that he just wanted to feel like a hero. A hero like Gunner-Senpai. Gunner says it’s okay, and just wants to focus on the match that’s not only tonight, but on right now! Oh and during this segment a woman twirled her hair at Shaw and seemed disappointed he didn’t notice. He only has eyes for Gunner-Senpai.

Gunner and Sam Shaw vs Bramgus
I was slightly disappointed Bram didn’t have Janice with him. Shaw is actually pretty good as he goes against Magnus. Both guys tag in their respective partners and Gunner does his headbutt the corner spot. Nothing like giving yourself a concussion. Shaw tags himself in which displeases Gunner. Gunner misses an Axe Handle from the rope and tweaks his knee. Bram clips it and pins him for 3. Shaw was very late breaking up the pin and goes nuts towards Bramgus because Gunner got injured. Gunner calms him down.

MVP meets up with Roode backstage and tries to convince him that EY is going to cheat and says EY told him he’s not forgotten how Roode would treat him like crap. 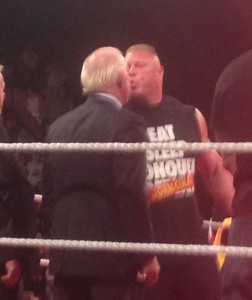 Eric Young vs Bobby Roode to be Number One contender for the World Heavyweight Championship
The crowd is split down the middle as two people who are pretty damn good at what they do, do what they do. Things are slow and mostly submission based at first but they pick up. There’s a whole lot of near falls. Probably a few too many. EY bridges out of a pin which looked good, and eats a Roode Bomb for his efforts and Roode gets the pin to become number one contender. Roode and Lashley could put on a pretty good match and Roode has the physique and record to be a legit contender. I think he was the best choice. EY teases a lack of sportsmanship at the end of the match but they hug and shake hands.

Roode is asked how he feels, and he says he’s exhausted and beaten up, but excited and ready. He’s going to get his title back, and wants some water. He runs into Lashley and they just stare lovingly into eachother’s eyes. Team 3D are also backstage with Team 3D. They picked a Tables match for the next in the series. Bully says that the Tables match is what they do best, and tag team wrestling in making a resurgance in TNA. Tag Team wrestling is back, but not for long seeing how a Wolf is crippled and half of 3D is gone. Bully says he wants Team 3D to go into the H.O.F as champions.

Homicide vs Tigre Uno vs DJZ vs Manik vs Crazzy Steve vs Low Ki to be X-Division Number 1 Contender
No Sanada? I’m sad. It’s that style of match there are two people in the ring, and you can tag anyone in if you need a break. Uno and Low Ki start things up. Everyone goes in and out, flips and flops, hips and hops, zips and zops, and ultimately Homicide kills that Gringo Manik to win. Great Starnada and Storm come out post match and Sanada kills that Gaijin Manik with a Last Call Superkick. He kicks him out the ring to Storm and they drag him off. More recruits for the sex dungeon I guess.

Austin Aries is in the ring with a microphone. He’s still a little green from the mist Sanada spit on him. Filthy hippie bastard. He calls out Sanada and Storm. This was just bad placement given how we’d JUST seen them drag Manik out. Storm and Great Starnada do come out. Storm says he’s been reborn and that he was there to welcome Sanada with open arms, like he will with Manik. He’s given him visions of winning and championships, and that Starnada will be the greatest man to come out of Japan. When people think of great, they’ll think of Starnada. Aries disagrees, saying the fans think of him when they think of greatness. Aries says Storm is a legendary bastard, and that he pisses off everyone. Aries says he didn’t come alone and introduces TA-FRICKCIN-JIRI. I marked out as Tajiri and Aries chase off Storm and Starnada.

Rockstar Spud is backstage. He asks EC3 why he’s got to do this, and Ethan says it’s because he’s not done anything to get revenge for what happened to Dixie. He can either leave, or go to the ring. 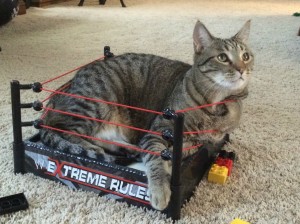 There’s a Melendez video package. It was good, but I still need a bald eagle. They included videos of Melendez training too. Melendez makes his debut next week, on September 10th. Oh if only TNA had stayed on Thursdays. I wonder if that was their plan all along and Spike really threw them under the bus.

Rhino vs Rockstar Spud
Spud dies. LOL. The ECDub chants are finally replaced by EC3 chants. I’ve wanted that for a while. Spud dodged the first Gore but not the second. EC3 walks out and leaves Spud for dead.

Samoa Joe vs Bobby Lashley
This match was hard hitting and powerful, but with enough pace for me to enjoy it. They Wailord on eachother, knocking eachother down but not out. Joe dodges a Spear and puts Lashley in the Kokina Clutch but King runs in for the distraction. Lashley slams him with a Full Nelson for a two, then hits a Spear for the win. I knew Lashley would win but they still put on a good match.

Randy Orton is the king of facial expressions.

I don’t know if I enjoy Impact more when I review it or if this episode was just better, but I did enjoy it more than last week’s episode.