“BoredWrestlingFan.com?  Never heard of it.”

Yeah, that’s right.  Jeremy Borash name dropped us at TNA Wrestling’s BaseBrawl in Buffalo.  Anyways, great show these guys put on, follow along with us, won’t you?

The wife and I got ringside seats for this one, and that included a meet and greet with TNA wrestlers.  It also included one of the coolest things I’ve had a chance to be a part of – Don West’s insane shilling of everything and anything!  We had the opportunity to buy a backstage pass for $80 or a TNA Brown Bag special for $20.  Don West = Pro Wrestling’s Billy Mays. 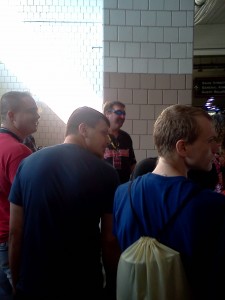 Don West shilling anything TNA can possibly make money off of.

We got in and got to meet several TNA stars.  I’ll tell you straight up, Matt Morgan is WAY bigger than he comes across on TV.  In fact, I told him that TV doesn’t do him justice.  He said “I’m sure I’m a lot bigger than the 6 inches I am on your TV.”  Damn right he is.  Also told Eric Young that I used to watch him in NSPW – he said that was “back when I was wrestling.”  Zing!

We got to our fifth row seats and continued to watch Don West shill.  Finally, he introduced Jeremy Borash, and we were underway! 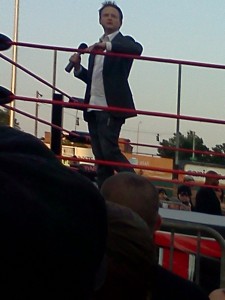 And what an opening contest it is – we’re introduced first to Eric Young, who is accompanied by Orlando Jordan. 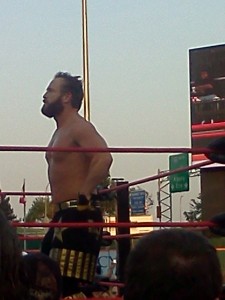 Eric Young is in the house - prepare to be entertained!

His opponent represents Fortune – and liked the old BoredWrestlingFan.com nickname of “Metalli-Kaz” when I mentioned it to him – and it’s Kazarian! 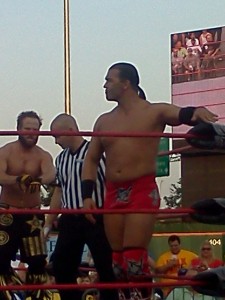 One of the best comedy matches I’ve seen in a long time.  EY starts off by wrestling with the referee.  Later on, Orlando Jordan helped inspire Young to get out of a rear chinlock by singing “Take Me Out To The Ballgame.”  Kaz finally winds up winning the match, and EY decides he wants to go after the referee, who subsequently decides to tell EY “you are outta here!” 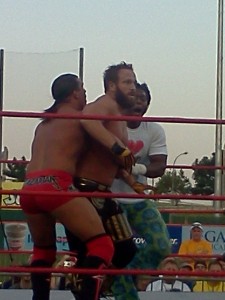 JB gives a big introduction to the most controversial referee in the history of professional wrestling, Earl Hebner, who, for some reason, comes out to “Man In The Box” by Alice In Chains, which is of course Tommy Dreamer’s old theme song.  The Buffalo faithful get on Hebner’s case, chanting “You Screwed Bret.”  JB holds Earl back as he looks to go after a few of them – but then he takes off his referee polo to reveal a t-shirt… 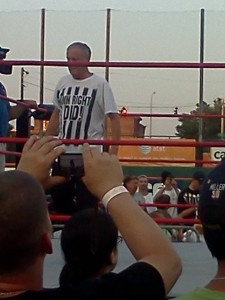 Earl’s here to referee a bout between two of the TNA Knockouts. 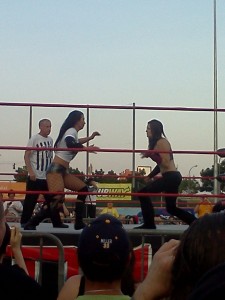 Tara and Winter get set to lock up

Great match between two women who actually know how to work, with Tara picking up the victory via the Widow’s Peak.

We’re informed that the cameras are rolling and that the following contest will be seen worldwide this Thursday on IMPACT Wrestling, as it is part of the Bound For Glory series thing they’re doing.  We’ll let you decide if you want to read it or not… 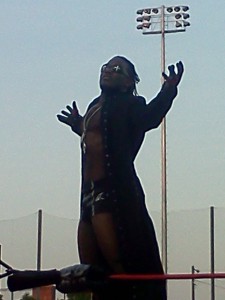 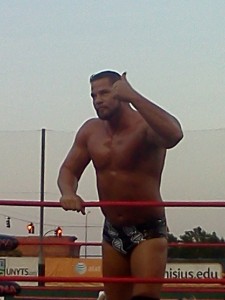 to take on "Beast" from American Gladiators

Wait.  Aren’t I supposed to call him “My Pope, your Pope, the Pope?”  Or something like that?  I know G has rules for TNA reviews.  I’m probably not following them at all.  Anyways, Great match with Pope on the offense for most of it, but he winds up eating a Carbon Footprint to give The Blueprint the victory. 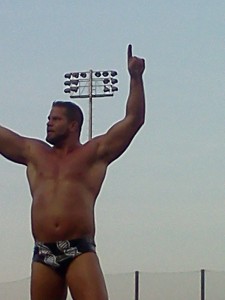 The following match, we’re told, is for the TNA Tag Team Championships!  We’re first introduced to the challengers… 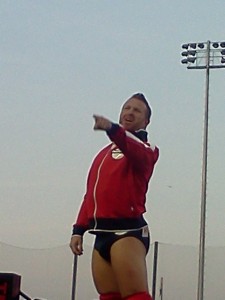 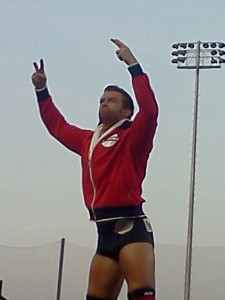 And then the TNA World Tag Team Champions… 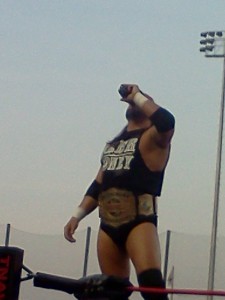 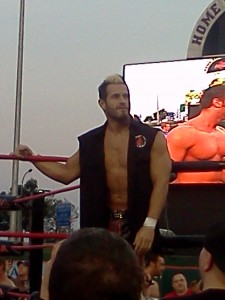 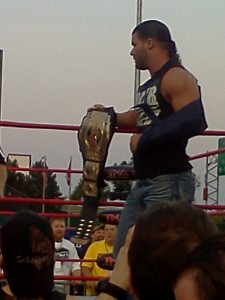 Got to meet The British Invasion and Alex Shelley before the show started, all of them were wonderful individuals.  The Brits had control throughout most of this one, keeping Alex Shelley away from Storm through much of the match.  The finish saw Shelley distract the referee while Beer Money hit a double suplex on one of the Brits.  Shelley hit Sliced Bread #2 on the same guy for the victory.

After this match, we took a 20 minute break, where Don West was shilling his ass off for all the merchandise available at the merch booth, including the Earl Hebner “DAMN RIGHT I DID!” t-shirt and a Kurt Angle pendant, which is what he was about to toss out to the crowd when this shot was taken by Dave Marino of Buffalo.com: 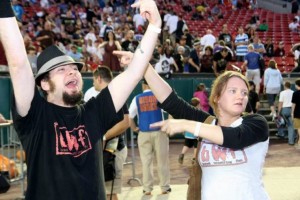 Nightfall cast a cool air over Coca-Cola Field as we came back from the break – and we’re set for another match that will air this Thursday on IMPACT Wrestling as part of the BFG Championship Series, or whatever. 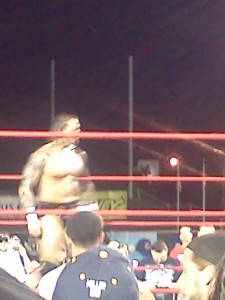 It was damned hard to get a good shot of Gunner. Not from lack of trying. 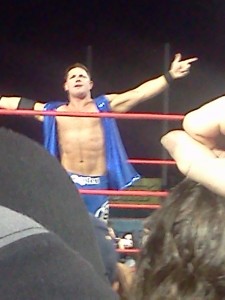 The Phenomenal One – a bit blurry, because my phone doesn’t like night pics, apparently.

AJ was treated like a huge star throughout the night, and rightfully so.  He’s one of the most talented guys on any professional wrestling roster.  Unfortunately for him, however, the referee got in his way as he was going for a springboard move, allowing Gunner to catch him, and give him a Samoan Drop for the victory.

And now, it’s time for our main event of the evening – and introducing first, your special guest enforcer… 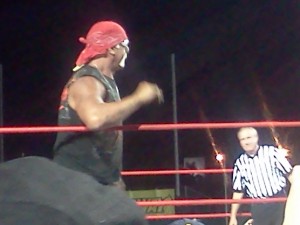 The Immortal One in Buffalo!

That’s right, HULK FRIGGIN’ HOGAN! At this point, my wife marks out – and why not, it’s Hulk Hogan! The first participant introduced for tonight’s Main Event is… 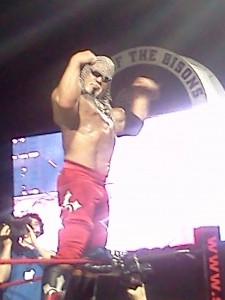 Steiner gets a mic – yes, that’s right, the only promo cut for the entire show. Out of all the guys who made the trip, the one they give a live mic to is SCOTT STEINER. Brilliant. He calls all the women ugly and says that he’s a real man, etc. Then we get the introduction (though not this epic) of his opponent… 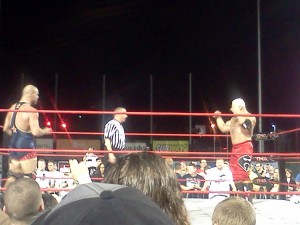 Steiner and Angle went all out in this one, with Hulk Hogan assisting Steiner as he got opportunities to do so, but Scott Steiner still found himself stuck in the Ankle Lock, like so: 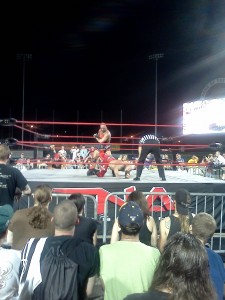 Of course, Steiner finally rolls through, which sends Angle crashing into Earl Hebner. Hogan takes advantage of the situation by tossing Steiner a chair. See? 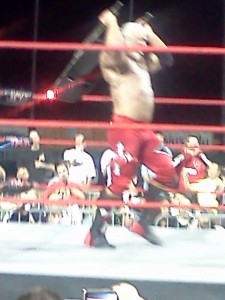 This looks a lot less blurry on my phone...

Steiner connects, and manages to score a two count. This prompts Beer Money, Inc. to come out and chase Hogan away… 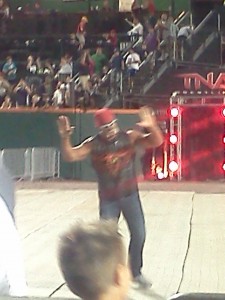 … Allowing Angle to hit the Angle Slam and score the pinfall.

Angle and Beer Money celebrate in the ring as JB offers to allow people to come in the ring and get their pictures taken with the trio for $20. The fireworks start, and Mrs. ThinkSoJoE and I head out.

Great show, the seats were awesome, and we were a part of this Thursday’s IMPACT Wrestling. That was definitely worth the $60 per ticket we paid. We’ll definitely see TNA again!

BTW, the link to Dave Marino’s gallery from the event (with much better pictures) is at Buffalo.com