So, you guys know the deal – I usually watch 30 minutes of RAW, leave for work, and review the rest of this show in real time as I watch it.  Well, due to inclement weather here in Buffalo, I find myself sitting at home right now, having watched all but 30 minutes of RAW.  I went out to catch my bus to work, but although the local bus company insists that their buses were all running on time today, mine never showed up.  At the time I left, it was 11 degrees Fahrenheit with a wind chill of -20.  As I type this, it’s 1 with a wind chill of -32.  So, if you can’t tell, IT’S FUCKING COLD OUTSIDE!  So, I called my boss, told him I couldn’t make it in, then came home and watched the rest of Old School RAW.  Afterward, I did some DDP Yoga, so I’m here now to actually review the whole show.  Let’s go!

I watch 30 minutes of RAW, freeze my ass off waiting for a bus that never shows up, and then come home and watch the rest of RAW.  That’s how this particular RAW review works.   It’s only getting colder!

The recognized symbol of excellence in Sports Entertainment.  Then.  Now.  Forever.

Live in Baltimore, MD, home of some fluke team that won the Super Bowl last year and didn’t even make it to the playoffs this year, and we’re here because RAW goes Old School!

WOOOOOOOOOOOOOOO!  The Naitcha’ Boy is in the house!  He’s wearing sunglasses indoors, presumably because he’s hung over.  Flair was at the 49ers team meeting the other day, and the Niners went on to beat the Packers yesterday.  Coincidence?  Probably, considering the Niners have done well against the Pack in recent years.  Flair welcomes us to RAW.  He’s ready to style and profile all night long, but some other guy hears voices in his head.  They tell him to walk.  Slowly.  To.  The.  Ring.  Randy Orton flubs his lines again as he talks about Flair taking him under his ring.  Orton asks Flair to step aside so he can ask the Authority to cancel his match with John Cena at Royal Rumble.  Flair says for Orton to prove he’s the man, he needs to defend his title at every opportunity.  Orton says Flair is overrated and threatens him.  Flair slurs his words and wonders if Orton is really a man.  Orton says he’ll go old school on Flair right now, which draws out John Cena, who assumes “old school” means “fight” and offers to go right now.  Why did G get the week that these two jackasses weren’t on TV?  Orton leaves. 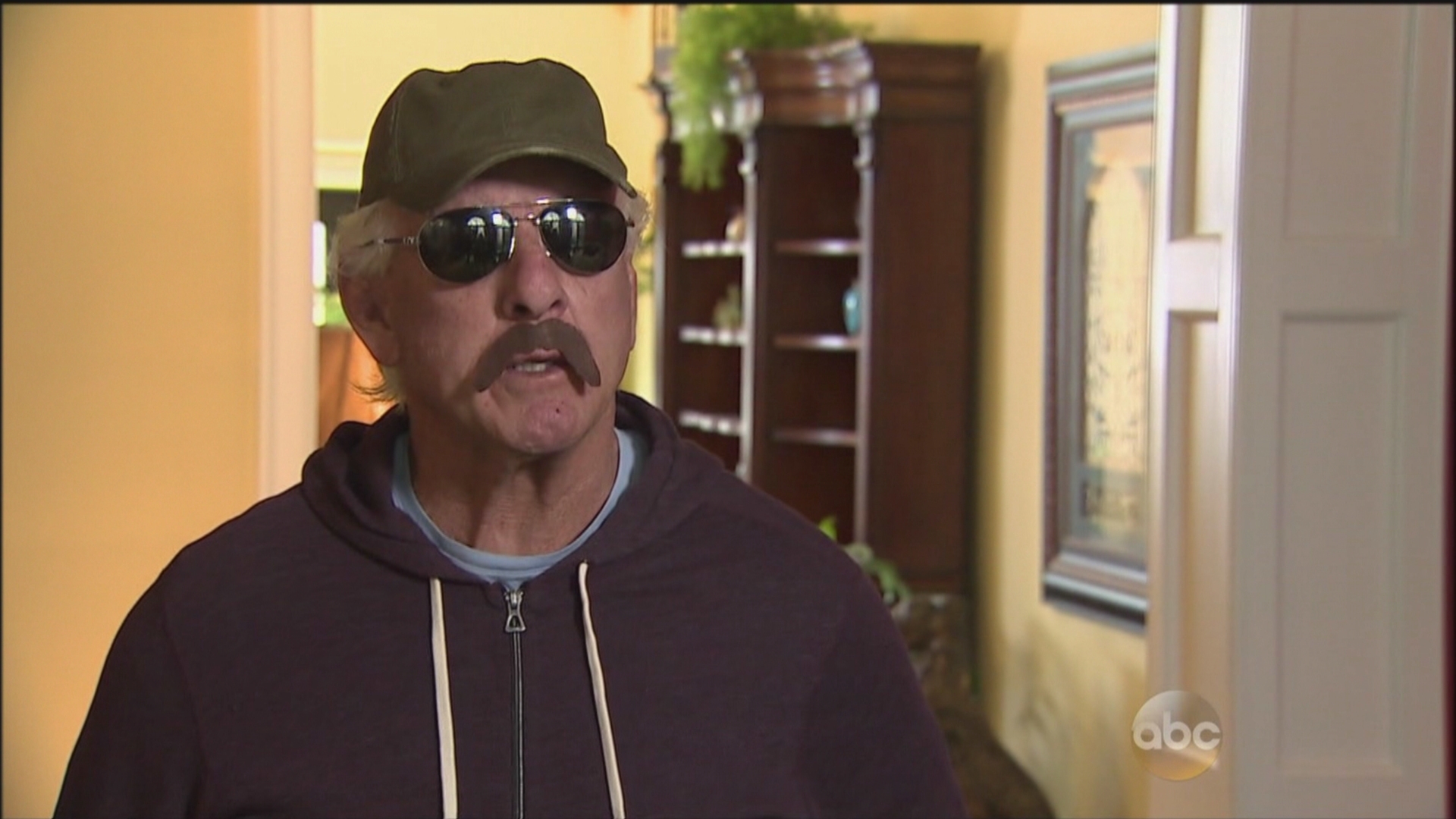 He was missing the hat and the mustache.

So it’s Rikishi’s kids and Rey Mysterio taking on The Wyatt Family – Luke Harper, Erick Rowan, and Daniel Bryan.  Bryan’s rocking a blue jumpsuit like Rowan’s green one.  You’ve seen the pictures on the internet over the weekend, you know what I’m talking about.  People who’s tweets are shown during this match include Jewel, Pee Wee Herman, Criss Angel, and Judah Friedlander.  Goat Face tagged himself in when Sheep Guy was in trouble, but Brodie Lee tags himself in before Bryan can do anything, and the Usos pick up the win. 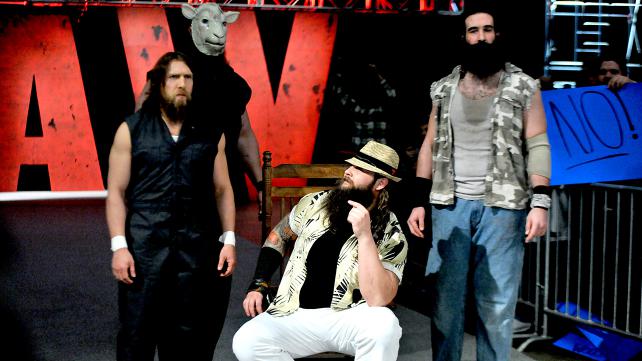 Batista has officially entered the Royal Rumble.  So maybe he’ll actually get that chance to eat Bo Dallas and Mojo Rawley.  Brad Maddox announced a rematch between Sandow and Khali.  The referee will either be Bob Backlund, Arn Anderson, or Sgt. Slaughter.  I personally voted for Arn Anderson.  The wife voted Bob Backlund.  Kane is back, wondering if Maddox wanted to say anything to his face.  Kane threatens Maddox without threatening him, if that makes sense.  Big E Langston passes Nikolai Volkoff (singing the Soviet National Anthem), Ted DiBiase, and I.R.S., who reminds him to not forget to pay his taxes. 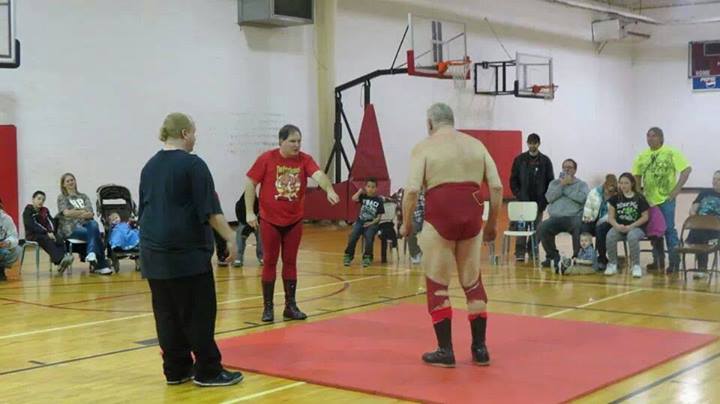 Nnnnnnoooonnnnnn title match!  Curtis Axel and Big E Langston with Ryback on commentary.  Snoop Dogg, Maria Menounos, Rob Zombie, and Timbaland tweet during this match.  Big E wins with the Big Ending, begging the question of why not make it a title match.

Rowdy Roddy Piper looks great, and he’s hosting Piper’s Pit – but The Shield interrupt.  Of course, they’re actually the guests, so it’s not interrupting, it’s showing up early.  Ambrose says that if the Shield were around in Piper’s prime, he wouldn’t have made it to 112 Years Old.  Rollins says Piper is jealous because Ambrose is a better US Champion that he ever was.  Piper says Rollins and Ambrose one on one couldn’t beat CM Punk.  He wonders, if Reigns beats Punk tonight, doesn’t that make him better than Ambrose and Rollins?  Reigns says he’ll beat Punk tonight, and if Piper every touches him again, he’ll break his old ass in half.  Ambrose suggests they leave a memorable impression on Mr. Piper right now, but CM Punk and the New Age Outlaws make the save! 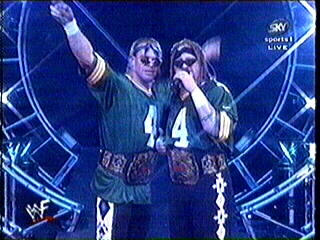 Hey, I know those jerseys! They’re the jerseys of the team who LOST yesterday!

Sin Hunico vs. Alberto Del Rio.  Again.  Del Rio wins this time, and he announces that he wants to be the one who eliminates Batista from the Royal Rumble.

Nnnnnooooonnnnnnnnnnnn title match.  The Brotherhood against the Real Americans from Switzerland.  Zeb’s sign this time reads “The best Defense is a Fence.”  It doesn’t help them – because Goldust picks up the win for his team.  The Cesaro Swing in this match was during the break on the WWE App.  Nothing to write home about in this one, another great performance by Goldust and Cody Rhodes.  Can you tell I’m to the point I got back home and started watching?

Backstage, the one and only Diamond Dallas Page is doing some DDPYoga, and he tries to show Booker T how to do a pose.  Booker has a pose of his own.  Ron Simmons comes in and says, you guessed it.  DAMN!

This guy is way too excited.

Damien Sandow faces The Great Khali in a rematch from last week, and Ranjin Singh is with Captain No Knees!  The referee chosen on the WWE App was not Arn Anderson, who I voted for, or Bob Backlund, who my wife voted for, it was Sgt. Slaughter.  Sarge looks good, but counts the pin for Khali while Sandow’s foot was on the rope.  As Sandow protests, he gets locked in the Cobra Clutch for his troubles.

Paul Heyman and BRRRRRRRRRROOOOOOOOCKKKKKKKKKKKKKKKKH LESNAR come out.  Heyman says that Brock wants the WWE Championship.  Mark Henry comes out and gets his arm broken.  The Big Show comes out and throws Lesnar halfway across the ring, sending Lesnar scurrying out of the arena.

It looked nothing like this, which disappoints Scott Mellanby.

So now we get the Bellas against Aksana and Alicia Fox.  Aren’t they supposed to be making me want to watch their program?  Jorge drove all the way over here in the freezing cold Buffalo air.

Joe:  That was last week’s joke.

Jorge:  Why do they make them in different colors?  They come out the same color anyway.

Joe:  You tell that joke so much it wound up in the review.  Congratulations.

JT:  Hey guys, check out this butt plug I got with my Chuck E. Cheese tickets!

Aksana pins the one without the boob job this week.

Heath Slater is back, and 3MB are reunited!  They say their winning streak starts tonight.  Then they take on The Usos’ dad, Jerry Lawler’s kid, and a fireman.  Predictably, Too Cool and Rikishi beat 3MB and dance afterward.

Looked like this. Except the fat guy was wearing more clothes and the dude on the left has much shorter hair.

Thanks to WrasslorMonkey (of WrestlingWithText) fame for this GIF, titled “The fastest rising star in WWE”

Mean Gene Okerlund is glad to be here in Baltimore, and has a lot of stories to tell about the city, which you can only get by calling his hotline.  It’s $5.95 a minute and kids, don’t bother getting your parents permission.  He then introduces Road Dogg Jessee James and Badd Ass Billy Gunn, who tell him not to tell the story about the three of them, a clown, and farm animals.  They do their shtick, and then they introduce CM Punk, who is rocking the old Ribera jacket. 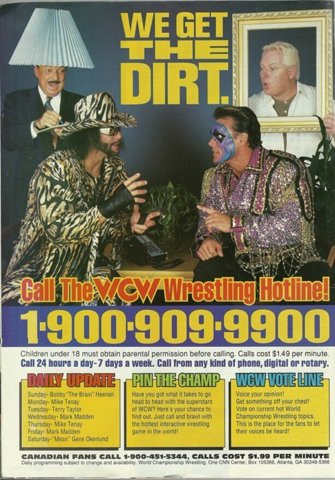 So it’s Punk with the Outlaws in his corner against Roman Reigns with Ambrose and Rollins in his corner.  A sign in the crowd, which may or may not have been made up of JT’s Chuck E Cheese tickets, reads “I’m only happy when it Reigns.”  The Shield try to get involved, but the Outlaws stop them.  Punk and Reigns have a great match in the ring, very back and forth, full of counters and near falls.  The fans chant “This is Awesome” and I agree.  Reigns escapes a GTS, Punk hits the running knee, but Reigns pushes him away from the bulldog, and with a quick distraction from Ambrose, Reigns spears Punk and picks up the win.  The Shield stand over a fallen Punk, and call for the triple powerbomb – but in the words of a text from Jorge, “Holy shit!!!!!!  Jake the fucking Snake!!!!!”  The Outlaws and Punk take out the Shield, Punk hitting a GTS on Ambrose.  Jake pulls the snake out of the bag and puts it on Ambrose, who is trying his best not to mark the fuck out in the middle of the ring – but not doing so well.  Jake Roberts closes out Monday Night RAW, and he looks fucking incredible!

Thoughts:  I dig the Old School gimmick, and in fact got to go to the one last year in Buffalo.  Most of the show was actually pretty good – but holy shit, I don’t think ANYBODY knew that Jake Roberts was going to be on the show, and to their credit, WWE did a great job of holding him to the very end of the show.  Here’s some pictures.  Enjoy.

This and the following images courtesy DDPYOGA on Facebook

For a guy who just had his arm broken, Mark Henry looks great!

The fact that Axel and Wyatt probably grew up around Jake and DDP is great if you think about it.

See you all Sunday at 2PM on BoredWrestlingFan Radio – which I’ll be on but won’t be paying attention to since the Niners are playing the Panthers around that time.