You know, I think my couch might be a little too comfortable.  Last night I fell asleep watching Extreme Rules, which was a solid event top to bottom, and tonight I fell asleep watching RAW.  Maybe it’s just me recovering from the illness that kept me from doing this RAW review last week.  Who knows.  Maybe it was RAW that put me to sleep?  Guess we’ll find out over the next few hours.  Let’s go!

Sierra.  Hotel.  India.  Echo.  Lima.  Delta.  Dean Ambrose is part of a 20 man battle royal – with his United States Championship on the line!  This was apparently ordered by Triple H.  So let’s see who’s all in here.  Goldust, Cody Rhodes, Ryback, Curis Axel, Fandango, Zack Ryder, Kofi Kingston, Damien Sandow, R-Truth, Xavier Woods, Jack Swagger, Dolph Ziggler, Big Show, Mark Henry, Sheamus, Santino, Heath Slater Titus O’Neil, and Sin Cara.  I think that’s everybody.  Yeah, that adds up.  Since I watched this earlier, FFW!  Ambrose winds up being one of the last two after he eliminates RybAxel and Jack Swagger, but he turns around into a Brogue Kick from Sheamus, who dumps him over the top rope and wins the United States Championship.

Triple H comes out and says The Shield got lucky last night, but their luck has run out because Ambrose lost the US Title and the three of them will face The Wyatt Family later on tonight. 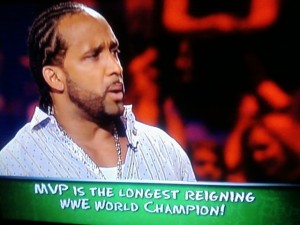 Can you spot the mistake?

Backstage, Sheamus tells Renee Young that he was tired of spinning his wheels, and so he took advantage of the opportunity to win the United States Championship.  When asked what he’d have to say to Dean Ambrose, he says “No hard feelings, fella.”

Elsewhere backstage, Daniel Bryan and Brie Bella are in a room when they’re startled by a loud knock on the door.   It’s Stephanie McMahon, who says they’ll be safe from Kane if they just stay put.  A Kane mask appears on the inside of the door.

In the arena, Rob Van Dam makes his way to the ring for his match, which is NEXT!

Last night at Extreme Rules, Cesaro defeated Rob Van Dam and Jack Swagger in a three way elimination match, a fact that Paul Heyman says makes him the new King of Extreme.  So now we’ve got RVD vs. Cesaro.  Cesaro winds up getting RVD tied to the proverbial Tree of Woe, but he continuously attacks him while he’s tied up and gets disqualified in the process.  After the bell, he continues the assault, but Heyman finally convinces him to stop.

This was the first thing that comes up when you search “King of Extreme” on Google.  I still can’t believe somebody thought it would be a good idea for this dude to front Van Halen.

In the ring, Bray Wyatt says Abigail told him he was born to lead, and that he’d change the world.  The world has wicked ways.  They’ve always referred to Wyatt as a nobody.  But this day is so sweet for him, because last night he became somebody.  Last night, John Cena’s fear was personified by that of a singing child.  Cena says that Wyatt is a monster, and he’s right.  He’d have you believe that Wyatt only wants to watch the world burn.  And he does.  He wishes to watch the world burn so it can be reborn in his image.  Cena thinks Wyatt only does everything for himself, but that is where Cena is dead wrong.  He does it for the children, for the beggars, for the teenage girls who cry because society don’t think they’re beautiful enough to be prom queen.  He does this for each and every one of you.  Cena stands alone, and alone he shall fall.  Stand with Wyatt, and never be alone again.  You won’t remember him as a monster, but for what he truly is – a God.  He’s got the whole world in his hands.

Cody Rhodes, with Goldust, take on Ryback, with Curtis Axel.  Earlier in the battle royal, Cody inadvertently knocked Goldust over the top rope in the battle royal for the US Championship.  Cody catches Ryback with the Disaster Kick, then a dropkick from the top rope.  He goes back to the top, Axel tries to interfere, Goldust tries to prevent him from doing so, but gets rammed into the post, causing Cody to lose his balance and wind up in Shell Shock, leading to a Ryback victory.

Backstage, Brie Bella and Daniel Bryan are in the same room they were in earlier, and the lights go out.  The Kane mask glows.  Bryan and Brie are trying to take off, and Stephanie says she’ll have their car brought up so they can take off, but they need to stay put. 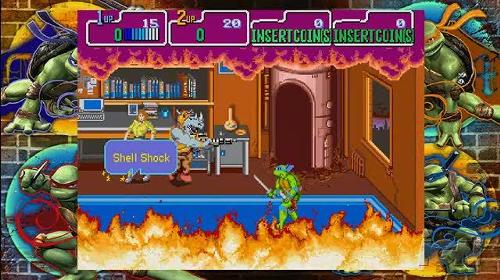 I’ve made this joke before. I know this, because this image from the Google Image results came from one of my RAW reviews from last June.

Los Matadores are having some kind of Cinco De Mayo celebration, in honor of El Torito’s win in the WeeLC match.  They argue over the pronunciation of “universe,” and Torito throws some candy out to the crowd.  3MB come out, and Heath Slater says this party doesn’t happen without “Tres MB.”  Slater says he wants to call a truce.  Jinder Mahal tells one of the Matadores that this is America and he should speak English.  Drew McIntyre says if they don’t accept their offer of peace, they’ll have to ruin their party.  Torito hands Hornswoggle some candy.  Hornswoggle refuses it and punches Torito in the face.  Slater watches the carnage unfold as Diego and Fernando take out McIntyre and Mahal.  He finally realizes he’s alone with the Matadores.  He tries to win them over by yelling “Ole!” but they toss him over the top rope.  Torito pulls a sombrero over Hornswoggle’s head and gores him. 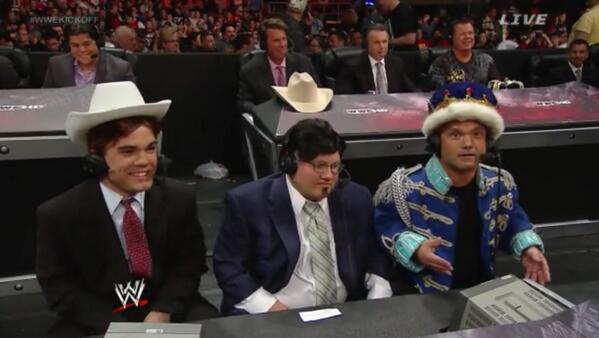 Can we get JBElf, Micro Cole, and Jerry “The King” Smaller back on commentary?

I’m starting to notice a pattern here.  Xavier Woods and R-Truth were destroyed by Alexander Rusev lately, and now he’s facing Kofi Kingston.  But not before Lana puts over Vladimir Putin.  Kofi actually holds his own, but of course it’s Rusev with the submission victory off of the Accolade.  Handsome Squidward watches on from the audience.  Seriously.

Daniel Bryan and Brie Bella get in their car and go to take off, when there’s a loud knock at the passenger side window.  It’s Stephanie McMahon again.  She says Bryan can’t leave until after his match, which is right now.  If he doesn’t compete, it’s a breach of contract and he’ll be stripped of the World Heavyweight Championship. 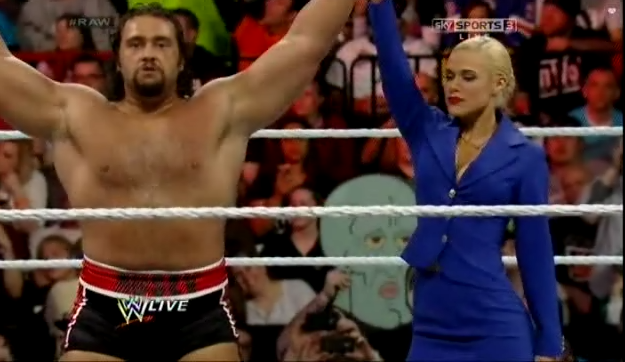 See, there he is!

Bryan’s opponent is Alberto Del Rio.  Michael Cole says that Bryan should try to win as quickly as possible, and JBL points out that Del Rio is no easy win.  Del Rio holds his own, but it’s mostly Bryan early on.  Del Rio turns it around before the break and maintains control when we come back.  It winds up being a heck of a back and forth match before Bryan makes Del Rio tap with the Yes Lock.

Kane’s pyro goes off, and Bryan and Brie try to escape up the ramp, and manage to get out of the arena and in to their waiting car, which, of course, won’t start.  Bryan says there’s a wire unplugged, and he plugs it back in before he realizes Kane is in the back seat going after the horrible acting of Brie Bella.  Kane and Bryan fight on top of the car, Bryan manages to get in and drives off with Kane still on the roof.  Bryan gets out of the car and sees Kane lying on the ground.  He sits up, and Brie screams horribly again.  They peel out before Kane can get back at them. 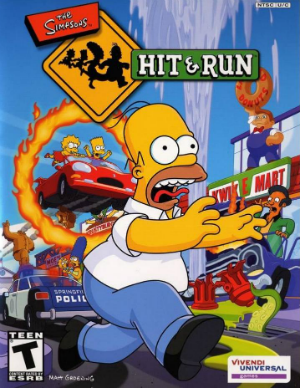 Big E and Bad News Barrett have their Intercontinental Championship rematch.  Barrett, of course, is afraid he’s got some bad news.  There will be some changes around here.  The deformed slobs in this audience aren’t worthy of a champion like him.  They need some serious cosmetic surgery before that happens.  I’m tired.  FFW.  Big E goes for the Big Ending, but Barrett escapes by raking the eyes, then nails the Bull Hammer for the victory to retain his title. 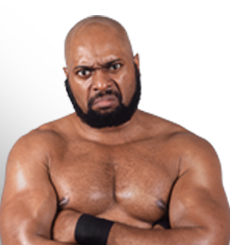 If you think Bad News is an original name, I’m afraid I’ve got some bad news.

Colter says for Real Americans, it’s not Cinco De Mayo, and any American who celebrates just wants to get dog drunk and vomit on theymselves.  What makes Zeb vomit is illegal immigrants, and he has a list of people to deport from WWE.  Cesaro, Paul Heyman, Emma, Santino, Sheamus, and Paige.  His speech is cut off by a party in the aisle.   Adam Rose is here!  It’s party time, all the time!  Anybody who doesn’t dig this, don’t be a lemon – be a Rosebud!  Which is exactly what he says to Zeb.  Swagger goes to attack, but gets dumped over the top rope and to the floor – then the party continues in the ring. 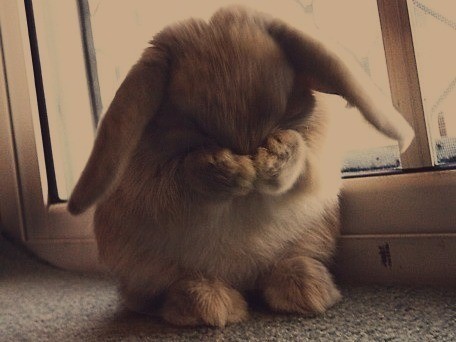 The Wyatts and The Shield make their unique entrances, and we’re set for our main event!  This match gets a ton of time.  And since I’m tired, FFW.  Seth Rollins and Dean Ambrose take out Rowan and Harper, Roman Reigns hits Wyatt with the Superman punch.  They set up for the Triple Powerbomb – but Evolution come down to the ring.  The Shield take out The Wyatts again, then Rollins and Ambrose take out Batista, Randy Orton, Rowan, and Harper again.  Reigns catches Triple H with a Superman punch, but Wyatt catches Reigns from behind with Sister Abigail to pick up the win for the Wyatt Family.  Evolution attack The Shield, dismantling Ambrose and Rollins first, then Triple H goes for a Pedigree on Reigns, but he escapes – only to get hit with an RKO.  Triple H then drops him with the Pedigree.  And to add insult to injury, Orton and Triple H pick Reigns up, and give him to Batista for a triple powerbomb.  Triple H, Batista, and Randy Orton stand over The Shield with their fists together, mocking the Hounds of Justice to end RAW.

Thoughts:  It wasn’t bad.  It wasn’t great either, but I’m not complaining.  I really don’t have much to say about this show.  Not sure why Sheamus was the one to win the US Title either.  There are other guys who could use the title win far more than a former WWE and World Heavyweight Champion.  Oh well.  See you Sunday for BWF Radio!