Home ▸ ThinkSoJoE's Thoughts ▸ What I want from WWE

What I want from WWE 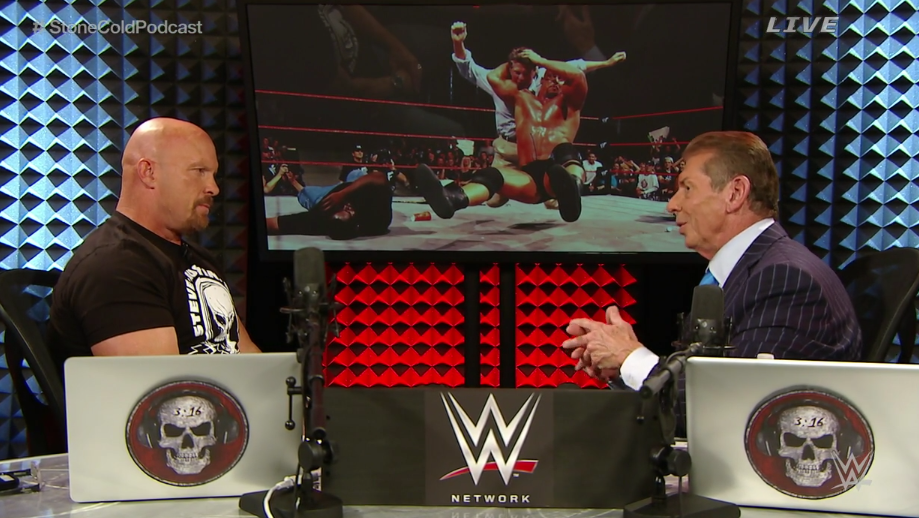 Monday night after RAW, the WWE Network aired a special “Stone Cold Podcast,” where Steve Austin’s guest was WWE Chairman Vince McMahon.  At the end of the show, Austin asked Mr. McMahon where people could go to offer suggestions for WWE.  Vince claims he listens to his audience, referring to the live audience, but Austin insisted that they could send their thoughts to the WWE and Vince McMahon’s Twitter accounts.  I saw a great post from @KellettFilm on Twitter with a list of things he would like to see, and I agreed with a lot of his list, and some of his things, in my own words, may show up here.  That said, here is my idea of what I’d personally like to see from World Wrestling Entertainment.

First and foremost, I think Monday Night RAW needs to revert back to two hours.  Or even 90 minutes.  Quite frankly, it is extremely difficult for the current product to hold my attention for that much time every week, sometimes twice a week.  Three hours should be reserved for Pay Per View events every few months.

Yes, every few months.  I think we need far less than 13 Pay Per View events per year.  We did just fine with just four or five.  The fact that they’re changing the Elimination Chamber event in February to something else is indicative of the fact that it’s very difficult to make the Royal Rumble mean something if five other guys that didn’t win the Rumble are getting a shot before WrestleMania inside the Chamber.

I’d love to have more long term story arcs.  I’ve been watching the early Monday Night RAWs on the WWE Network, and you could see the seeds planted for WrestleMania X back before even Survivor Series in November of 1993.  SummerSlam 1994 angles were developing by the Royal Rumble of that year.  And I never had to watch Owen Hart wrestle Bret Hart during their year long angle except during those Pay Per View events they had matches on (the debut of WWE Action Zone notwithstanding).

I’d like for WWE SmackDown to go back to being a show where angles continue, like it was when it first started in 1999.  Which is another reason we don’t need three hours for RAW.  If we have something booked for RAW; for example, the debut of The New Day; don’t put it on SmackDown three days earlier.  And stop having matches on SmackDown for the sake of having a rematch on RAW the next Monday.  I don’t watch SmackDown now because I don’t feel like I’m missing anything.

I’d like the Intercontinental Championship to mean more.  Randy Savage and Ricky Steamboat made that title feel just as important, if not moreso, than the WWE Championship in 1987.  At one point, the title was considered a springboard to the WWE Championship, a platform that in their current roles I can’t see Dolph Ziggler or Luke Harper attaining anytime in the near future (though, both of them should certainly be future WWE World Heavyweight Champions).

I feel the United States Championship should either be defended more often or disbanded altogether.  What did Dean Ambrose have, 5, maybe 6 defenses in his record setting title reign?

No more authority figures, especially heels.  I’ve written at length about the subject before, and I still feel as strongly about it then as I do now.  It was suggested that maybe a more Jack Tunney-like authority figure, who rules from his office and only speaks on issues when absolutely necessary may be a way to go, and I agree with that.

While we’re at it, how about less talking altogether?  Austin mentioned in the Network podcast that he feels the opening segments of RAW go on far too long.  I get we’re trying to establish characters and rivalries in an effort to make the fans care more.  I feel it can be done quicker.  And on the subject, no more promos to open a Pay Per View.  I don’t care if I only paid $9.99, or if I paid the full $65, this isn’t Monday Night RAW, I paid for wrestling.  WRESTLING.

WRESTLING.  It’s not a dirty word.  It’s what these guys and girls who have made it here have worked their asses off to do.  Yes, I get that it’s “sports entertainment,” and I don’t have an issue with the term.  I have an issue with the fact that we’ve somehow made “wrestling” something we’re not allowed to say.  And I’m not a Universe, I’m a fan, dammit!

Look, I understand the point of being a publicly traded company and that seven hours of original programming is a lot for any writing staff, but can we hire some writers who are wrestling fans and may actually agree with some of these ideas?  I understand that competition is any other form of entertainment, but you’re not any other form of entertainment, you are wrestling.

And the final thing that I’d like to ask of WWE is to please not screw up NXT.  Keep doing what you’re doing there.