NXT has been relaunched, albeit not on television in the US. But I’m Canadian, so why should I care? I’m like Bret Hart, after all, a Calgarian… a heel in the States and a face EVERYWHERE else. But this isn’t about me, it’s about this new version of NXT, after all. I’m not even supposed to be here today, so let’s hop to it… shall we? 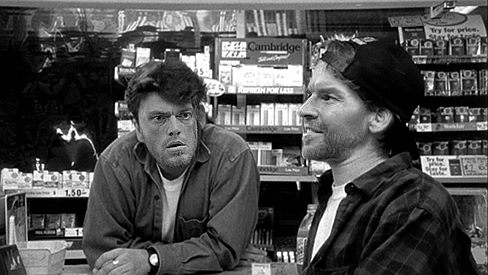 I watch, write, suffer, and succumb to most shows, yet have to remind myself of what happened only minutes after each episode. But I haven’t seen this incarnation of NXT yet. So how in the hell can I know if I even like it?

– I don’t plan on doing these every week, but figured I have to give the first episode a little love. If anyone reading this is interested in writing reviews of NXT for TWO websites (and keep your own content exclusively your own to appear on your own website as well), contact us where ever you are reading this and we’ll see if we can work something out. I’m currently covering Smackdown for boredwrestlingfan.com and wonderpodonline.com.

Charles Barkley will continue to stare into your soul if you ever thought about writing/talking about wrestling and didn’t make the move to do so. Don’t be a jerk. Contact us today!

– The show kicks off with a voice over clip montage about great wrestlers fighting to the top like Hogan, Hart, Austin, The Rock, etc. It changes to show all the new guys, “NXT is the gateway to the future, and the future begins right now.”

– They dropped that terrible Wild and Young song for Welcome Home by Coheed & Cambria. The logo is the same. From Full Sail University, Florida.

– Your announcers tonight are Good Ol’ Jim Ross and William Regal. Looks like business is about to pick up, Sunshine. Jim Ross gets an entrance, Regal does not.

– JR welcomes us to an exciting new beginning of NXT, and introduces the NXT GM, if you wheeeeeellllllllll. The American Dream, Dusty Rhodes! He’s just a common man, but the crowd pops. JR asks what he has in store for us, and Rhodes tells us big mainevents, exciting stuff, etc.

– Interview segment showcasing Bo Dallas, who is the grandson of Blackjack Mulligan, and son of I.R.S. Meh, kind of vanilla.

Off to a decent start, but it ain’t no hoverboard magic just yet..

– We are privy to seeing Lawler’s favorite RAW moment to hype the 1000th episode of RAW from last Monday… again. Mr. Socko, balloon animals, etc. It was still funny the 12748651348731 time, but damn do they overuse the same old, same old.

– * Rick Victor vs. Bo Dallas. Victor gets no entrance, but “Bo Bo” Dallas sure does. He’s charismatic with a huge upside according to JR. Regal calls him incredible. Both also put over Victor as also as hungry and capable, having trained with the Harts (so basically he has the skills, just not getting a chance). The two exchange a good back and forth battle to start, but Bo gets the upperhand shortly after with a spear and pinfall finish. The announce team put over the loser… but then some new announcer talks to Dallas at the top of the entrance ramp about his win! OLD SCHOOL! LOVE IT! Bo makes himself a catchphrase, “Know Bo.” Let’s be frank, that’s a shitty catch phrase… don’t kid yourself.

– A video package for Seth Rollins airs. He talks about wanting to break the cookie cutter mold and his move set looks pretty damn diverse. Shocked? You shouldn’t be…. 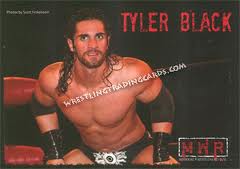 Smark, you damn well know who Seth Rollins is.

– * Damien Sandow vs. Jason Jordan. HALLELUJAH! Damien makes his classic entrance down to the squared circle, and he is here to help all of you. They “what” him, but Sandow no-sells it, rather opts to play off of it. He questions why he is facing off against an unworthy ignoramus. He does it for the awareness and benefit for all of us. We’re welcome. Jordan gets no entrance, but rather the opportunity to stand with his mouth agape wondering what just happened. The answer? You just got educated the fuck out!

– An awesome special effect promo for “The Gateway to the Future.” THE ASCENSION! They are possibly wizards, vampires, super villains, or hang with Neo in the Matrix. I’m not sure. The Ascension Rises NEXT? The segment is great! It starts after this commercial break! DUDE I AM MARKING OUT FOR THIS! 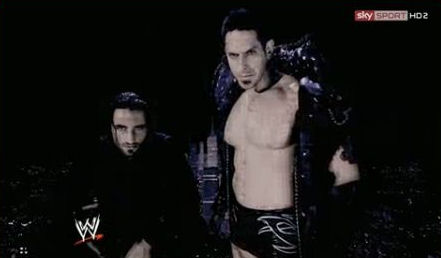 This is some fucked up shit, right here.

-* ” The Ascension” Connor O’Brian and Kenneth Cameron vs. C.J. Parker and Mike Dalton. As they enter, the shots swap from their glow-in-the-dark contacts and quick clips of moves and poses from the evil duo. Cool! Love that! The Ascension enters under a dimmed blue lit (don’t worry. not Sin Cara) ring. They have whites in their eyes as the stare and hunker upon the apron shooting daggers at the audience. Yep, they’ve got to be faces. They make short, demanding work of Cameron and Parker (Lewis CAN lose). We have some dominant heels here folks! JR and Regal put them over as such, as well. All looks well in NXT country.

Enjoy! Bray is coming to get you! I hear dueling banjos…

– Derrick Bateman and Johnny Curtis have an exchange in a men’s room. It’s a holdover segment from the “Redemption” 67 or so debacle. Curtis got sad and nervous about their history while in the stall. Bateman tells him not to be sad, rather scared, as they face off next week. Entertaining (these two had some of the only watchable segments on that “season.”).

– * Michael McGillicutty vs. Tyson Kidd. Twenty minutes left to go, looking for a clinic. JR notes McG’s lineage acknowledging his father being Mr. Perfect, as does Regal. I like the non-bickering announcing more with each segment. BOTH get entrances, and the crowd is behind the gentleman from Calgary, Alberta…. Canada. Things start slow, in the good way with catch-as-catch-can. STALEMATE! The two stare and saunter before going a step further… but continue to go into strings of moves. WHY THE FUCK ARE THESE GUYS NOT ON THE MAIN SHOWS!!! Perfect Jr. gets frustrated, and walks outside contemplating his next move, which turns out to be “a brilliant bridge, a lost art, the bridge” according to Regal. He then drops an Owen Hart reference towards Kidd who breaks the hold… but the heel controls the match. Kidd regains momentum, kicking Mike outside and launching a suicide dive upon his foe as we cut to commercials….

The core of the show. Now I want potatoes.

– We’re back! And facebook is a piece of shit. But that’s a story for another day. Meanwhile, the two are continuing to wrestle one of each other’s best matches in the WWE to date. Mike and Tyson pick things up to a near boil as they exchange power moves and brawling attacks. Kidd is suspended in a tree of woe after a beat down to keep him in the position, then chokes him out from the outside! Back into Woe goes Kidd, but he defied gravity by pulling up to the top as McGullicutty eats a ring post! KICK! KICK! KICK! Kidd can’t get a pin after an offensive onslaught! JR has dubbed Kidd as the new owner of the description of “educated feet.” But the two are worn down… Kidd nor McGullicuty can capitalize. Mike locks on a SHARPSHOOTER! But Kidd gets the ropes! Fuck this match is great, I’m rewatching it after this review thing. Kidd locks on “The Dungeon Lock” and picks of the submission win! CALGARY, ALBERTA,…. CANADA FTW! Eat it America! LOL.

That’s right smarks, marks, Little Jimmys and the like. You can now leave your audio rants and ravings and we will try to play it online. Keep in mind, we are trying to keep it clean. So do your best to avoid the language that offends people easily offended. I make a concerted effort to not call the product fucking shit ass bitch cock cunts. You can too. See? This is not on the air.

Make sure you tell’em “G” sent you. I will give you a shout out, maybe even stalk you! Hey, free stalker! It’s a win-win situation, right?