Hey look it’s Smackdown! And it’s Friday! So it must be time for me to deprive myself of a good night’s sleep and watch two hours of this show. After a piss-poor live event last week, let’s see what the good folks in London, England did at this installment. That in itself should be incentive to watch, considering the hot crowd on RAW. There will be no holograms on this show… 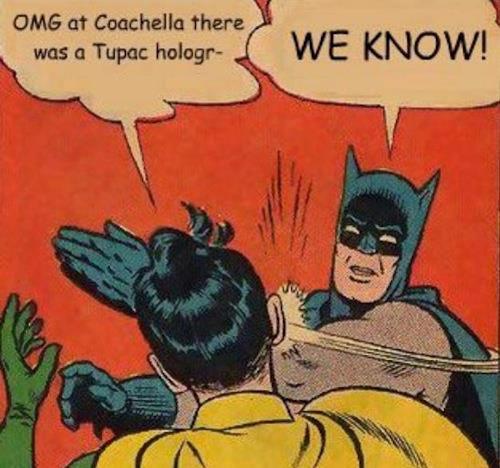 Enough. It was kind of neat, but enough.

Cheap plug! I cohosted Wonderpod 106 this week with GunSage, Patman, and Glasanator this week. And YES! YES! YES! There are plenty of wrestling influences on this episode. Check it out.

– Our show kicks off with He of the Yes-Lock, Daniel Bryan making his way to the ring… to talk. The crowd eats this up, and pops loud for him. Even a little kid on his Dad’s shoulders dressed in Cena gear is marking out! First word? “Yes!” Bryan calls Sheamus a coward, and runs through the laundry list of Sheamus’ latest story lines. Bryan promises when he returns to the city where his rise to the top began, he will shock the world again. Bryan utters that dastardly word Vince hates, “wrestle” multiple times, promising to out wrestle Sheamus. The crowd is divided here… enter AJ. Bryan flips out, tells her to leave, but she wants to talk and this is the only place she can do that. She wants to talk about their problems, and Daniel corrects her and says he had a problem, but got rid of it. AJ still wants to make up… etc. You get the idea. It’s an awesome segment. You should watch this.

Man, I love the European crowd keeping this guy a tweener.

– * AJ vs. Natalya. A teared up AJ now has to face the forgotten farting phenom, and the story continues for her in that regard. AJ doesn’t even want to start the match, hell, Natalya comes over to console her briefly as she stares back at the stage dejected… then she flips out on Nattie and starts girly slapping her (reminding how terrible her in ring skills are) as Natalya sells for her. The match appears to be ruled a no contest as AJ makes her way back. TERRIBLE match, GREAT story telling.

– Damien Sandow cuts another promo. This one about founding fathers allowing the freedom of knowledge while most people are concerned with TMZ and whatnot. He plans on enlightening us. I’m all for it.

– * Brodus Clay vs. Hunico. Oh hell yes, it’s time to funky (like a monkey?). Or is it? Brodus cuts the music, but assures the crowd he’ll get there… but his little brother was supposed to be here, and asks the Funkettes to go get him. Yep, it’s Hornswoggle. And in all fairness, Hornswoggle owns this part with his dance moves! I thoroughly enjoy this, as campy as it is. Brodus squashes Hunico.

– We cut to Darren Young and Titus O’Neil mocking Teddy Long backstage who is seeking Aksana. Enter Johnny Ace, and that the rant is about what the people want… The NXT guys leave, and John makes Teddy wear a Beefeater hat and has to stand there and not say a word. Long looks like he want to kill the man.

– Orton is interviewed by Matt Striker about Kane murdering him and his father last week. Then we get a clip package.

– * The Uso Brothers vs. Titus O’Neil and Darren Young. The Usos do their intro, but they are out of time. “Perhaps they are guitar players?,” asks the drummer. Very noticable to me, but whatever. Out come the NXT gang. Hard to say how this one is going to go…It looks like the WWE is going to favor pushing the new tandem, and this is Titus’ first match on Smackdown. They dominate the Usos for the majority of the bout. And they get the win with some heeltastic tomfoolery. 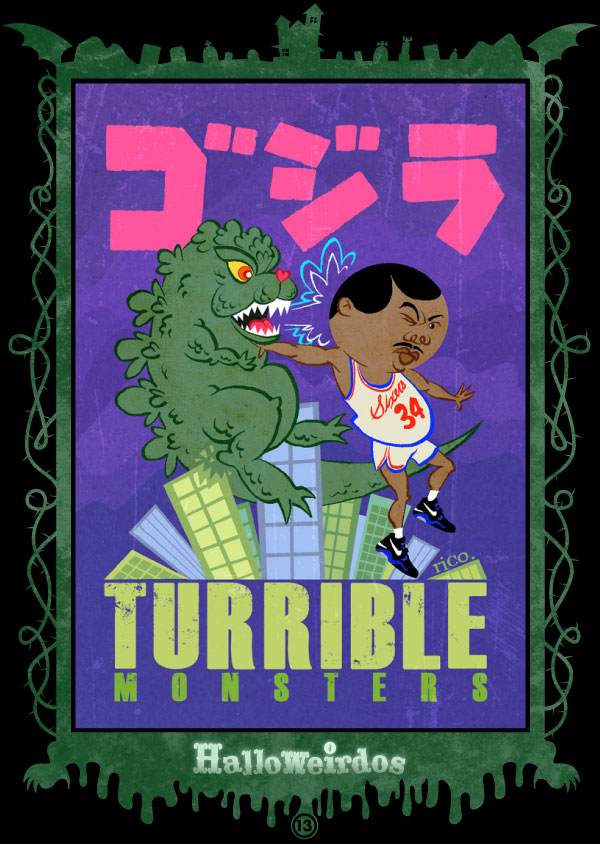 Charles Barkley @G: “Why are you hating on the Tupac hologram G? Seriously, that CGI stuff takes time to do, I should know, I fought a Godzilla that way once. Like that Funkasaurus guy, he’s CGI right?”

G @Charles Barkley: “Ok first. I don’t hate the hologram, I too thought it was cool. I just got fed up by the interwebs hype. Second, you didn’t fight Godzilla as CGI, it was some dude in a rubber suit. Third, and seriously I’m getting tired of this Barks, GODZILLA IS THE CREATURE’S NAME… NOT A SPECIES!! I’d like to see you go to battle with Brodus. Dick.”

– Sign of the night in the front row, hard camera side: “Luxembourg Hates Cena.” Take a look at the size of that country on a map. It’s one of the smallest nations in the world. Of course if one fan hates Cena, that might very well be the entire professional wrestling fan population. So this sign may indeed be accurate.

– * Big Show vs. Alberto Del Rio (w/ the best ring announcer not name Howard Finkel, Ricardo Rodriguez). Big Show is HUGE over in London! I didn’t realize that… Show gets to work quickly on ADR, pushing him around, and calling for silence from the crowd with a classic Show slap in the ring corner. Del Rio manages to reverse the momentum back towards the Land of Misfit Heels, by punching out the back of the giant’s knee and dropping Mr. No Gimmick Needed. It’s armbar time! YAY! 🙁 Fortunately this doesn’t last long, and even without HD, the massive red welt on Del Rio’s chest. The story shifts to ADR keeping Show on the ground. As Booker puts it, Del Rio “Is just grinding on this boy!” Take that for what you want it to mean. Show regains his footing… but a Cody Rhodes run in costs him the match. Your winner? Del Rio. 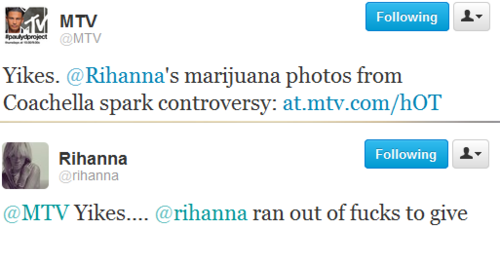 Wow, Rhianna. I’m still not a fan of your music, but that was about the most rock and roll response you could have made… Let Chris know we still want to see Phil kick his ass. #straightedge?

– Drew McIntyre and Heath Slater are not allowed to sit down. But they will enjoy the next match on television backstage regardless….

This should be Lord Tensai’s finisher, not some watered down Mist that looked like he drank a Slurpee 30 minutes before his match.

– Clips of the Brock Lesnar interview from Monday night. I loved that it was filmed in the style of the UFC. That makes sense. Look, we loved him back in the day, but the dude is a MERC. He came back for the money, but that’s fine. His accolades are the reason his character should be over for his feats in that sport. It would be ignorant not to capitalize on that fact.

– * Sheamus, Randy Orton, and The Great Khali vs. Daniel Bryan, Mark Henry, and Cody Rhodes. We get ten minutes of ring muslc, maybe more. I have channeled my inner Big Lazy, Big Slow, wrist-watch X-Men power! Yawn… The 5 Time Champion induces sleep… Wait, the Mediocre Khali? Fuck this…. what is this? Crimson and Bully Ray versus Matt Morgan and Austin Aries? You made me run out of steam WWE. Goodnight Moon. In a perfect world Bryan creates his own team midmatcn and wins. I wrote a bunch of shit, decided it was too play-by–play… Deleted it. Big Show WMD’s from the outside the ring into an RKO. Faces (w/ Orton win). 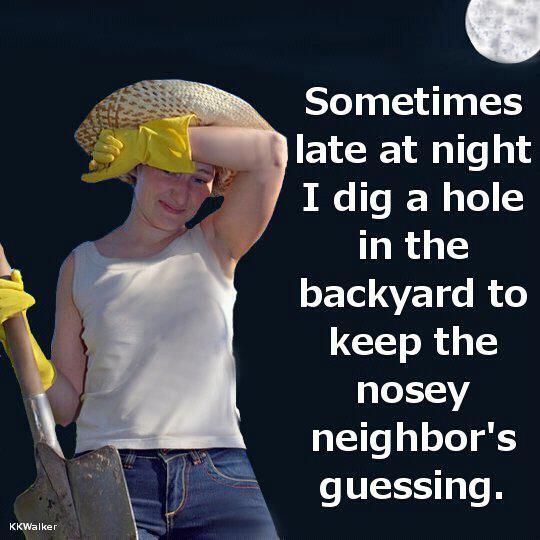