Here it is, the groove slightly transformed, a little break from the norm as I take over the Smack down duties for G for (hopefully) few weeks as he goes Maple Syrup hunting or whatever they do in Canada this time of year.  Why you ask would I take such a daunting task as to fill the unfillable sheos of G?

This should be interesting since I haven’t watched any WWE product since before Money In The Bank back in July.  I think the last match I saw had Jericho in it.

Speaking of Jericho, he confirmed doing all this.

JTGee- See I told you Jericho was the greatest Canadian to ever live, Screw you Rush!

Well since 3 months have passed and nothing much has changed according to G, I’m not expecting much of a show and since it’s a go home show to a pay per view, a lot of highlight packages.  The WWE app sent me a message hyping the show.  Then at 5 minutes before air my cable box decides it needs to be reset, the signs are not looking good.

It finally finishes rebooting at 8:15 so I missed the first 15 minutes of the show, hopefully I didn’t miss how epic is was.  I’m sure they’ll remind me later.  The Uso’s come out wearing pink from head to toe.  They even have the same side of their face’s painted so we can’t tell which one is which.  They are facing the Wyatt family. And Miz is on commentary.

Match 1:  The Uso’s def. The Wyatt Family- Miz distracted the Wyatt’s chasing one of them to the back.  I guess the Wyatt family is trying to recruit Miz, I don’t know why, he just doesn’t fit.  Not even in TNA, ROH, Little Jimmies Wrestling School, G’s Basement.

Tamina & AJ look like they are heading to the ring.

The Bellas talk about Breast Cancer awareness, since it the only one.

Match 2- AJ def one of the Bella twins- Nope, not covering this one ffwd 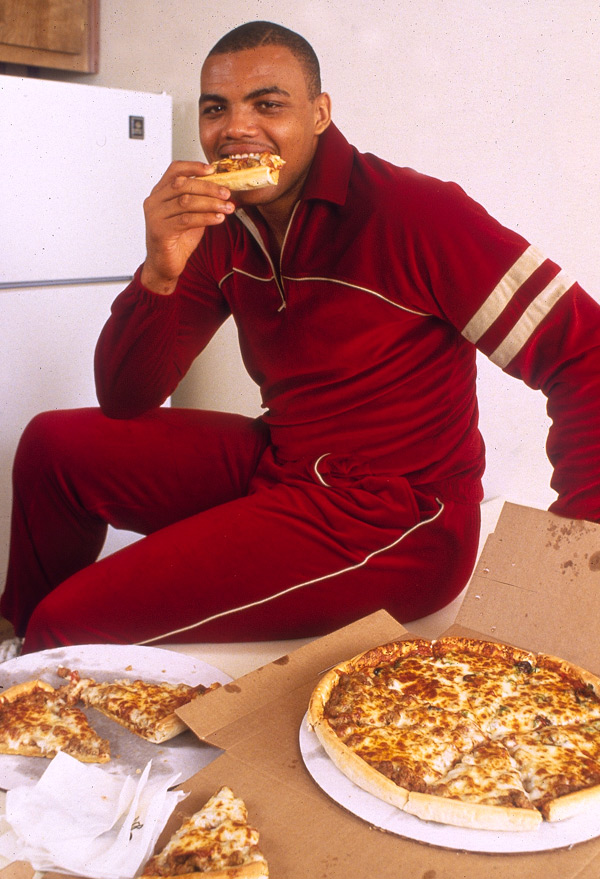 @Charles Barkley @JT: Look JT we did it, firs we escaped and now we got rid of G! #revenge
JT @Charles Barkley: Um, I’m only temproray, G is coming back I think, He didn’t like your Halloween Costume either he says it’s offensive to pizza delivery guys.
Charles Barkley @JT: So that’s why he was talking about Dominique Wilkins. I haven’t heard that name in like 20 years. “

A special look at John Cena’s career, been there done that.  Tapped Out time.

We go to the back and Bray Wyatt who has the camera follow him to the other members of the family and a knocked out, chained up Miz.  Bray say Miz now understands the true meaning of “Follow The Buzzards!”

3MB is in the ring and they are facing Los Matadores.  I see the entrance, um no.  I’m done and haven’t even seen them in the ring in this gimmick. This is stupid. Epico and Primo are better than this. ffwd since I know they win.  But then The Real Americans music plays and this happens:

[youtube]http://www.youtube.com/watch?v=-paa3wwGWww[/youtube]
JT Hogan appears- Well you know something brother I am the true Real American Dude Brother. When I created this gimmick it was for exploitment for financial gain only not political gain Dude Brother.

And then he leaves. Weird. I still ffwd thru this match since the real americans just watch Los Matadores get the victory. Zeb Colter then grabs the mic, spouts his immigrants bad speil and the segment ends like this:

[youtube]http://www.youtube.com/watch?v=6T3blDLl8JY[/youtube]
Note: Not really, it ends with them saying “We The People” shocker.

Paul Heyman is whispering sweet nothings in Ryback’s ear. They’re killing someone next!

As they walk to ringside, we get a recap of the epic encounter between Ryback and Big E Langston from RAW, Joe covered it so you’ll just have to look there to see how.

Pre match Heyman hypes up how awesome him and Ryback are and how tonight will be a demonstration of what will happen to CM Punk this Sunday.  And their opponent tonight, CM Skunk!  Yes you read that right, some jobber came out dressed like Punk except he had a white stripe painted in his hair.

Match 4: In the shock of the year, Heyman & Ryback def. CM Skunk

Vickie is in the back watching and thinks  CM Skunk is funny. Big E come in and wants Miz’s spot in the main even tonight. Vickie grants him the opportunity but only after he compare Vickie to Brad Maddox.

Respect The Champ, Bitches!!!!! It’s Alberto Del Rio Talk time! He calls himself the Mexican Superhero, says, he’s better than all of us, he’s gonna make Cena tap out and that everyone can Kiss My ……….. we get a stupid smile and he pats himself on the butt. LAME!

So WWE is instead of have their wrestlers wrestle, compete to be the better on shop salesman, groan.  Yeah I’m not putting WWE’s online shop on here just because of the segment, but at least we got this guy:

No not me, the other guy.

Fandontgiveashit is up next.  I didn’t care then, I don’t care now, ffwd.  And I had good reason to, he was wrestling Khali and I don’t even know who won so we move on.

Apparently RAW was the most socially active show in TV.  Well since it’s the only show on that constantly tells you to, I’m not surprised.  They don’t tell you mid scene in Bones or Family Guy to go be on twitter or their app, they actually want you to watch the show.

Main Event Time: Daniel Bryan, Big E Langston, Cody Rhodes & Goldust def. The Shield & Super Robot Orton- Sorry no play by play, you can find a million of them on the internet.  Bryan pinned Orton in this one. A little foreshadowing perhaps for this Sunday.

Overall: Not a bad show from what I watched.  I liked the fact thatRAW wasn’t being crammed down my throat like in the past, though this may just be a one week thing.  I found out that the part I missed was a HHH talking segment, another positive.  Well here it is my first ever Smackdown review and done in almost real time. Well until this Sunday, have a good one and thanks for reading.