So.  G’s clone decided he wanted to take over my RAW review on Monday, huh?  Well then, two can play at that game.  G’s locked up in his own apartment basement (Team Alpha rescued JT, and caught G while he was trying to stop us), and I’m here to tell you all about… SmackDown?  This show is still on the air?  Oh well.  Fuck it.  It’s hopping time!

I watch, write, suffer, and succumb to this show, yet I have to put my first animated GIF below the fold so the dudes at Wonderpod don’t yell at me.  This is not your typical SmackDown review.  I have no intent of taking this show seriously, since it was taped almost a week ago, a day before RAW even aired – and RAW was live, so I don’t expect a lot of storyline advancement out of this show.  So fuck it, let’s go!  And fuck you, RAW review!

Same deal as my RAW reviews – 30 minutes at home, the rest at work…

First 30 quick recap:  The Shield tell us there is no dissension among them, while subtly hinting at dissension with their body language.  Then Rollins and Reigns face The Usos, which ends in a DQ victory for the Usos when Ambrose gets involved.  CM Punk makes the save, and Vickie Guerrero books, you guessed it, a six man tag for later tonight.  Fandango loses to R-Truth when Xavier Woods brings out the Funkadactyls to distract Fandango, much like he did to Brodus Clay on Monday.

I think Dean left it there on purpose so Seth could hurt himself when he lands on it. That’s what CM Punk told me. Check out the WTF look on Rollins’ face.

We get a recap of Daniel Bryan joining the Wyatt Family this past Monday on RAW.  Which is interesting, since this show happened before that happened.  It’s like they can see into the future.  They see Mojo Rawley there.  What they don’t see is the fans shitting all over him like they did to Bo Dallas last year.  Remember when he was on the main roster?  Neither do I!

Neither does this guy…

“The following contest is set for one fall… and it is for the WWE Tag Team Championship!”  Ha ha!  I got a tag team title match and G didn’t!  So it’s Rhodes Dynasty vs. Brodie Lee and sheep boy from the Wyatt Family.  Bray Wyatt is not there (but his chair is), and neither is Daniel Bryan, who, at the time of the taping, wasn’t even a member of the Wyatt Family.  But interesting nonetheless.   So does Bryan start wearing a goat mask now?  “They might start 2014 without those championships.”  Uh… aren’t we supposed to be pretending this match actually happened in 2014?  Which would mean that even if they lost, they still technically started 2014 with the Tag Team Championships.  Or would the official title history list the date they actually lost the titles?  I’M CONFUSED!  Thanks, JBL!  The heels dominate most of the match, but a mistake by Rowan allows Goldust to tag himself in and roll Rowan up for the three count to retain the titles.

Big E Langston does a backstage interview with Renee Young, where he’s holding the Intercontinental Championship and talking about Mark Henry getting beat up the next night on RAW.  This promo actually aired on the big screen in the arena, spoiling both the Intercontinental Title match and Mark Henry getting assaulted by Brock Lesnar on RAW.  Curtis Axel finds it funny.  He’s sorry about what happened to Mark Henry, and that’s what he’s laughing about.  Big E tells Renee Curtis won’t be laughing after their match.

Aksana pinned Nikki Bella on RAW.  I watched RAW, but I don’t remember that happening.  I think I literally took a piss break during that match.  Speaking of piss breaks, it’s 2012 Worst Wrestler of the Year Aksana vs. the Bella Twin with the boob job.  Jorge shows up.

With that, Jorge takes off, jumping through G’s apartment window, sending glass shattering all the way down to the ground below.  And Tits McGee wins the match.  Then we get the Randall Keith Orton promo video from RAW. 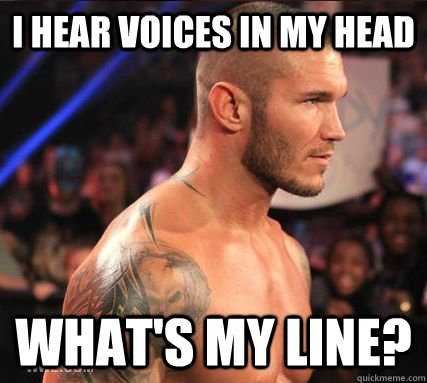 Sadly, the infamous moment at the RAW after WrestleMania 29 where Orton had to ask Sheamus for his line didn’t make the video.  Or an animated GIF, apparently.

G’s favorite thing in the entire world, a nnnnnnnnnnon title match between Curtis Axel and Big E Langston.  The announcers talk about Batista like it’s some big deal that he’s back. I personally do not give a flying fuck about him.  Unless maybe he eats Bo Dallas and Mojo Rawley.  That might be entertaining.  He’s supposed to be an animal, after all.  Big E wins with the Big Ending.  Not to be confused with the Happy Ending.  That’s a completely different thing. 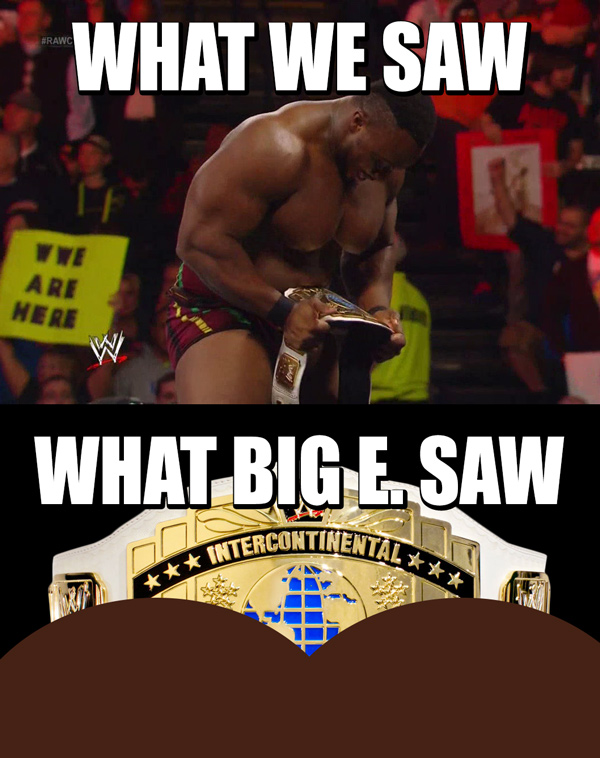 Have I used this gem from Wrestling With Text yet?

Brock Lesnar beat up Rick Ross.  Michael Cole asked Paul Heyman why.  Heyman says Brock wanted to be the champion.  Because Brock Lesnar wasn’t the last Undisputed Champion before he signed exclusively with SmackDown (in the storyline), creating the need for a separate World Heavyweight Championship.

Bad News Barrett has his rising podium thing again.  His bad news is that you won’t keep your New Year’s Resolutions.

IT’S  MAIN EVENT TIME!  Punk and The Usos vs. The Shield.  Punk continues to try and cause problems in the Shield, sending Ambrose into his own corner and demanding “let’s find out who the weak link is!”  Jey Uso gets Rollins out of the ring and goes for a suicide dive, but Reigns blocks his path.  Interesting enough, the copy of SmackDown I have includes the WWE App stuff, so I’m actually getting this match commercial free!  Punk does the spot with Rollins they did on Monday where Punk rolls through the cross body and locks in the Anaconda Vice, but this time, the rest of the Shield are here to break it up.  Punk winds up picking up the win with a GTS on Ambrose.

SmackDown ends with a Bray Wyatt promo talking about Daniel Bryan joining him.

Thoughts:  Wasn’t bad.  Not much to write home about.  Then again, why would I be writing home about wrestling anyway?  In any event, the tag title match was great.  The Rhodes Dynasty have been putting on consistently good matches since they’ve been back.  See you in two days for more COCKTALK!  #ButtPlug