There was a PPV last week, and Smackdown’s new champion is Rey Mysterio… Kane is still hunting for his brother’s attacker… and that’s more or less what will be addressed tonight. Hmm… let’s see if it was worth watching sinec it’s SUFFERING time! CAPSLOCK!!! (Note: This is being edited live, since I mistakenly hit the publish button while drunk and watching…)

– Teddy Long tells us what I just told you in a video before the credits… and also that Rey will defend it against the winner of a match in the next PPV called “Money in the Bank.” Hence, the special part of WrestleMania (and my favorite match of the year after the Royal Rumble) is being raped for all it is worth. But you know… I will probably enjoy that PPV! Also, Vickie begins to say something about Vince being attacked… but is interrupted by Drew McIntyre who is bitter about Teddy jumping in to officiate in the IC title bout he had with Kofi Kingston. The board of directors has given Teddy his power back, he is reinstating Matt Hardy and he and Drew will do battle later in this episode.

– Former champion Jack Swagger is set to face the Big Show. Rumor has it, that management is unhappy with ol’ Swagger, and this is why he lost the title. Swagger tells us he has filed a protest with the WWE since he had to defend his title in a fourway match… whine whine whine, cry cry cry…

– The match begins, and it’s a total domination of Swagger by our giant… SUPERPLEX FROM THE MIDDLE-ROPE as Swagger sells nicely… commercial break! FFW!!!! As we return, Swagger gets a glimpse of retaliation, but not for long as Show continues his relentless abuse of Jack. Later, Jack tries to make Show submit with a pretty lame locking standing leg hold (?) of some kind… but it does shift the momentum in his favor… looks like Swagger got busted open the hard way! NO MATCH STOPPAGE! DAMMIT, Swagger puts the “Angle Lock” on Big Show, with far less intensity as Kurt…. Show grabs the ropes, but Swagger will not let go. Match is ruled a DQ in Show’s favor. Show sells an ankle injury as Swagger exits stage left. That match was alright, I suppose… I did enjoy Show’s selling of the injury post match, pretty well done for the slow and immobile one. 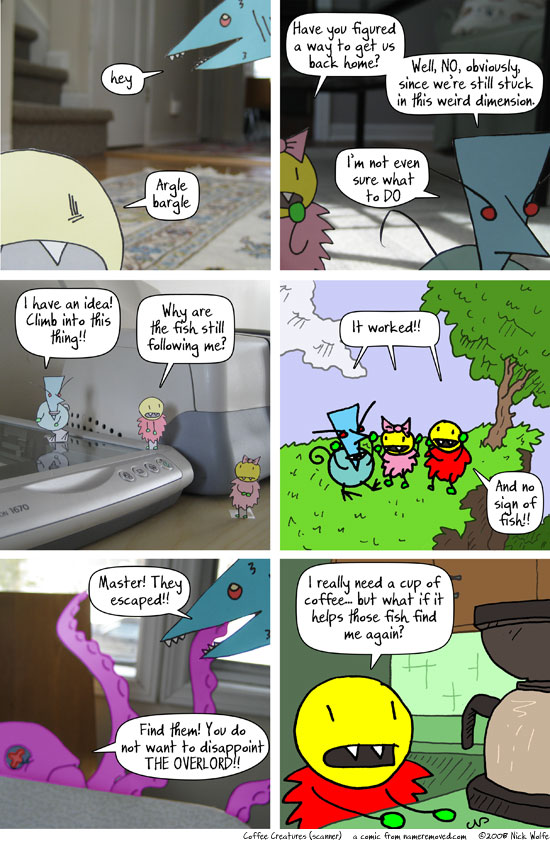 First result in a Boolean Google image search for the term “Argle Bargle.” Nice… I wonder if buddy ever found the fish again…

– Curt Hawkins and Vance Archer are out now that they have contracts due to making an “iMPACT,” and tagging with Dolph Ziggler. MVP/Christian/Kofi are their opponents (Christian gets a HUGE pop). Kofi is from New Guinea this week. Next episode, he’ll be from an uninhabited island recently discovered off of the coast of Ireland. The match has potential, but will it live up to it?

– All three heels suffer outside attacks by all three faces in the forms of splashes or dropkicks as we cut to break… nice spots!

I have no idea where the hell this is from, but damn… nice form on that ninja kick, dude!

– We return, and the faces lose control as Kofi enters the ring. The usual isolation of one face ensues… you know the drill. Kofi eats a nice looking elbow drop from Ziggler… Christian gets a tag in, and goes into ring clearing mode… yep, predictable, nice springboard sunset flip by Captain Charisma on Ziggy! Christian then goes to the top ropes, and a sweet leg drop! Everything dissolves into chaos briefly, until Christian hits the Unprettier for the win! Ziggler totally botched his role though… 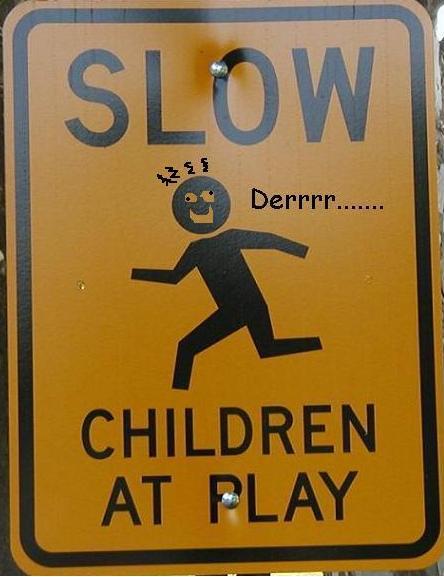 – We are then treated to a recap of Vince getting destroyed by Nexus/the NXT Seven. FFW!!! Already watched that… The message from the RAW GM, is that “These actions will be met with appropriate consequences.” The thing that made no sense with this screenshot, was that the cursor was flashing IN THE MESSAGE! This means that we were seeing the UNSENT message… LEARN HOW TO USE COMPUTERS WRITER MONKEYS!!! Yeah, I’m “overthinking” it, you might be thinking. The way I look at it, is that you are “underthinking” it. Over-analytical? Nope. Whenever people tell me that, I smile politely, but what I am really thinking is that I am talking to a retard who takes pride in not thinking.

– Drew McIntyre versus Matt Hardy. Things get funky early, and intense. Drew atomic drops Hardy outside the ring onto the steel steps… the ref begins to count Hardy out… BUT NO!! He makes it back in, much to Drew’s chagrin. The crowd starts chanting “USA, USA, USA,” since the whole storyline here is about Nationality, right? What the fuck? I’m not even going to bother commenting on how stupid that crowd reaction was… DUDE!!! McIntyre sends Hardy from the top rope with a modified flying driver in a tight looking bump! NICE! NOT ENOUGH!! They continue a little bit of back and forth as we cut to break. Nice to see this match given some time!

– And we return… More decent action starts us off, but nothing to write home about. I am not sure why this comes across as run of the mill right now… building to a finish? Drew hits a sweet looking reverse neck breaker on Hardy! Hardy is pretty much looking like the living dead, but still manages a lazy elbow from the ring apron to McIntyre to the outside… both men are clearly exhausted… Drew attempts to curb stomp McIntyre, but Hardy reverses it as Drew lands on top of the steps squarely on his back, and Matt attempts to drag him in for a pin… NO!!! That was a nice spot. Ok, I am right back into this match! TWIST OF FATE! YES!! PIN!! MATTY FOR THE win. lowercase.

– Teddy Long appears on the trinatron, and tells him he has bad news for him, “Somebody’s visa has expired. […] Send Mr. McIntyre back to Scotland.” Security comes out to deport said Scotsman. Really? This is actually kind of weak… Drew protests briefly, throws a bit of a temper tantrum… on the way out, the crowd boos the hell out of him. We’ll have to wait to see where they go with this… He’s over super huge as a heel, right? Kayfabe? Yes.

– Cody Rhodes and his NXT guy (what’s his fuck?), are out… turns out Rhodes is trying to cut a Rick Rude stylized promo since a “Diva’s Poll” resulted in him being voted most handsome. Rhodes uses this as fodder… and demonstrates by showing Husky Harris’ horrible physique. That’s his “fuck.” HA HA HAHAHHAHAHAH!!! Cody tells us it’s not genetic… “Have you seen my father? Have you seen my brother?” Awesome. Then it’s time to belittle the fat inbred folks in the crowd, and Tod Grisham (for being a nerd), etc. So this is like Lay Cool type of crap… BULLSHIT, then Cody lays ontop of the ropes like Shawn Michaels…. “Dashing Cody Rhodes,” he says over and over again. I am not sure if I liked that at all… nope, no sir. Felt forced. 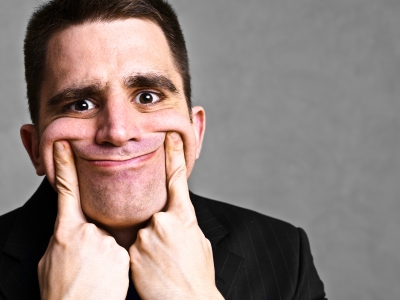 – Cut to some crap between Dolph and Vickie backstage…. Dolph demands an Intercontinental match, I guess.

– We return as Rosa Mendez is skipping rope in the ring. Oh crap, Kelly Kelly w/ Tiffany is out to face her. It gets worse, since Lay Cool is on commentary… meanwhile, Mendez starts skipping rope again… FFW!!!

– I guess that match ended in one move as Kelly, etc., wins. This is why god hates wrestling fans…

– BTW, Kaval is in the bit looking about as pissed off as anyone with his credentials could. Well, and the inability to convey emotions like “the humans,” but I digress… 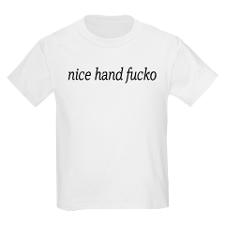 – We get an old school introduction to some new guy named Alberto Del Rio, or something… it’s kind of entertaining, as he calls himself the only honest man out there… it’s also kind of recycling, really. How long before he starts calling himself, “the bad guy,” and starts flicking toothpicks at his opponents?

– Alright, CM Punk versus Kane. I’m torn, since I love Punk… but have little faith in this match up. Thankfully, Punk grabs a microphone before this begins…. “I only have one thing to say,” he begins, “this is the face of an innocent man.” He tosses the audio-receptive-stick down and we hit commercials, so naturally…

I don’t speak German, or whatever… but this graphic rules.

– Meh… there is 8 minutes left or so in the broadcast, and I am TRYING to watch this. At least they start off with some violence outside the ring, but it is Kane beating the crap out of Punk (who is still wearing his Mysterio mask, seldom viewer). Punk eats ring-barricade as Luke Gallows attempts to interfere to help his messiah out. Kane has none of it, as he lays out the former drug-induced-Pavlov-experiment! Eventually, the two double team Kane until the mystery man comes in to help. The mystery man has his shirt off, and so he is now OFFICIALLY a white man. DUDE! Punk gets tossed by Kane into the crowd seating for a HUGE bump. He makes it look “casual,” naturally. OWWW!!! Then my internet goes out, since god STILL hates wrestling fans. Speaking of which, if you live in Western Canada, FUCK SHAW CABLE. Thank you.

– As the attempt to take down the “Big Red Machine” continues, Luke Gallows gets chokeslammed through the announcer table… Kane is chasing Punk backstage! SWEET! Punk is tossed through a so-called “merch-table.” They are outside the arena, Punk takes advantage and runs away into the darkness…

You know why I love the guys in Fugazi?  Well, not because I am straight edge… that I am certainly not.  Nope (although CM Punk rules too).  Nope, just sheer honesty and a love for what they do.  A band who refused to raise ticket prices beyond $5.00 (US) for a long time, until they conceded and finally raised it to $10.00 due to the realities of inflation.  Also, stuff like this endears me to them:

G might be the mastermind behind this project… maybe. Could be a clone version though…
LarG Productions

My brother in arms, ThinkSoJoE kicks ass and takes names with the band ThinkSoBrain:
Thinksobrain